A study led by University of Oxford researchers, Dr Brent Ryan and Dr Nora Bengoa-Vergniory has shown that the key protein RE1 Silencing Transcription Factor (REST) regulates the health of those neurons critically affected in Parkinson’s Disease. 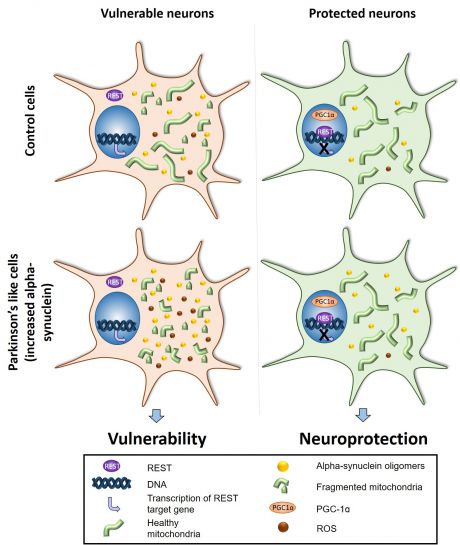 The research team from the Oxford Parkinson’s Disease Centre identified REST as being inhibited in mice which show Parkinson’s-like symptoms and that this was linked to aggregation of the disease-causing protein alpha-synuclein and failure of energy-producing mitochondria in these cells.

The research showed that REST was unable to reach the nucleus of the dopamine-producing cells affected in Parkinson’s and aggregation of alpha-synuclein further stopped this process. This decreased REST in the nucleus caused impairment of mitochondria function in cells and disrupted energy production. In contrast, cells with increased REST were protected against stress and increased nuclear REST levels were found in neurons which are unaffected in Parkinson’s.

This work demonstrates a new way in which these dopamine-producing cells are vulnerable in Parkinson’s which has led to identifying REST as a potential new therapeutic target for Parkinson’s.

Dr Brent Ryan said “REST may act like brakes on a car in some neurons to slow them down. This research suggests that the dopamine neurons affected in Parkinson’s are not able to apply this brake and that this may be compounded by aggregation of alpha-synuclein. Ultimately, it appears that without REST acting as the brake, eventually, the energy system in cells- the mitochondria- fail. Understanding how and why this selective population of cells is affected in Parkinson’s has led us to identify potential new treatment strategies.”

Dr Nora Bengoa-Vergniory said “This is an important advance showing that early disease modelling can uncover unknown aspects of Parkinson’s. The selective vulnerability of certain neurons still puzzles us after decades of research, so we need to expand our knowledge in order to develop disease modifying treatments for people with Parkinson’s”