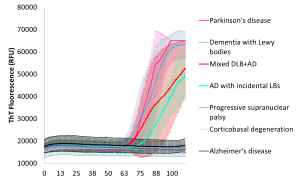 Scientists from the Oxford Parkinson’s Disease Centre (OPDC) together with Edinburgh Prion Unit have developed a new diagnostic test for Parkinson’s that measures the “stickiness” of alpha-synuclein; one of the key proteins in Parkinson's, in the cerebrospinal fluid (CSF). This same protein forms sticky clumps known as Lewy bodies within the brain cells of people with Parkinson's and dementia with Lewy bodies (DLB). There is currently no definitive test that allows doctors to determine if someone has Parkinson's or related dementia, especially at the early stage and the diagnosis is based purely on clinical symptoms and can only be confirmed with a post-mortem examination of the brain.

Previous efforts to develop a test for alpha-synuclein have produced inconsistent results because the protein is also found in the brain and CSF of healthy subjects. It is only when the protein clumps together that it causes problems.

An extremely sensitive technology called real-time quaking-induced conversion (RT-QuIC) allows the measurement of stickiness of proteins and this approach has already been used to detect CSF prion protein in Creutzfeldt-Jacob disease.

Using RT-QuIC technology in the brain material derived from Oxford brain bank and CSF samples from the OPDC Discovery cohort, Dr Laura Parkkinen and her team were able to detect “sticky” alpha-synuclein protein in people with Parkinson's and DLB with sensitivities of 95% and 92%, respectively, and with an overall specificity of 100% when compared to Alzheimer and controls. Interestingly, few people known to have risk of developing Parkinson's/DLB (i.e. people with REM sleep behaviour disorder) had a positive result suggesting that this test could potentially detect those at risk before their motor and/or cognitive symptoms appear and thus allow the initiation of early treatment that could slow or even stop the condition.

“These are hugely promising results and we are in the process of extending the analysis to a larger cohort of OPDC Discovery samples. We are particularly keen to understand how early these changes can be detected and whether our assay could be used as a predictive test. We also hope to further refine our technique to detect alpha-synuclein aggregation in the olfactory epithelium collected through safer and less invasive nasal-brushing procedure.” -Laura Parkkinen

The study: "Alpha-synuclein RT-QuIC in the CSF of Patients with Alpha-synucleinopathies" is published in the journal Annals of Clinical and Translational Neurology.