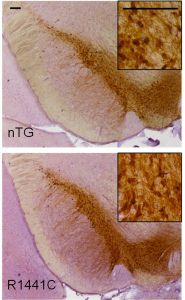 New paper published in Human Molecular Genetics by Max Sloan and other OPDC investigators and fellows.

Changes in the LRRK2 gene are known to be one of the greatest genetic contributors to Parkinson’s disease. We created rat models expressing the variants of LRRK2 found in Parkinson's disease patients in order to characterise the changes that occur in the onset of Parkinson’s.

We found that rats that had these LRRK2 variants had clear motor and cognitive impairment, and this only occurred in aged rats and not young rats. This motor impairment was corrected using L-DOPA, the current standard treatment for Parkinson’s. We also demonstrated that in aged LRRK2 rats there was a reduction in the release of dopamine, the key neurotransmitter that is depleted in Parkinson’s. This was accompanied by changes in the electrical signalling of dopamine producing neurons. All of these changes occured in the absence of cell loss in the substantia nigra, a key region of the brain affected in Parkinson’s disease. This suggests that the early changes that occur in Parkinson’s disease centre around dopamine dysfunction which happens prior to the cell loss that is seen in the later stages of the disease.