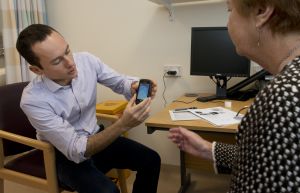 Parkinson’s is the second most common neurodegenerative disease, the hallmarks of which include tremor, stiffness, and slowness of movement. Existing tests for the assessment of Parkinson's require in-clinic examination. This can sometimes cause a delay in diagnosis. It is believed that there are changes in the brain 5 to 10 years before the symptoms of Parkinson's become evident. To try and facilitate early diagnosis of Parkinson's, we at the OPDC investigated if smartphones can be used to detect any potential differences in motor symptoms associated with Parkinson's and REM sleep behaviour disorder (RBD).

It is now increasingly recognised that having RBD may be a risk factor for developing future Parkinson’s. In this study, we used a smartphone app featuring 7 motor tests to measure: voice, balance, walking, tapping, reaction time, rest and postural tremor. Recordings were collected both in-clinic and at home. Using the smartphone recordings, we developed mathematical algorithms that quantify patterns of motor impairment that are specific to RBD, Parkinson's, and Controls.

In one of the largest cohorts of deeply phenotyped participants, we report that smartphones can be used to discriminate between participant groups with a high level of accuracy (84.6% to 91.9% mean sensitivity and specificity). These findings providing growing consensus for the utility of digital biomarkers in early and pre-symptomatic Parkinson's.

This research was funded by Parkinsons UK and made possible by all the participants who took part in our study, to whom we are utmost grateful.

The research paper is published in the journal Neurology - read the full paper here.