Researchers from Richard Wade-Martins lab recently hosted members of the Southampton branch of Parkinson's UK for a visit to talk about research being carried out in Oxford. After a welcome from Richard, OPDC Career Development Fellow Dr Dayne Beccano-Kelly spoke about how he is using electrophysiology of dopamine neurons grown from cells donated by members of the OPDC study. He is hoping to better understand how communication between these cells differs in people with Parkinson's.

Dr Charmaine Lang spoke about about her work on these lab-grown dopamine neurons with RNA-sequencing. This measures gene expression, which is the process by which specific genes are activated to produce a required protein. The aim is to identify which genes show a difference in expression when comparing people with and without Parkinson’s.  Computer programmes are then used to see if these genes work together on related processes that we might be able to target with therapeutic drugs.

Dr Phillippa Carling from the lab also shared some of her research which is using automated techniques to enable her to test 1000's of potential Parkinson's drugs on the lab-grown cells with the high-throughput system here at OPDC. 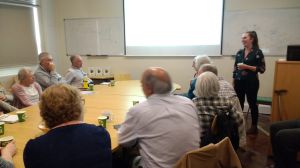 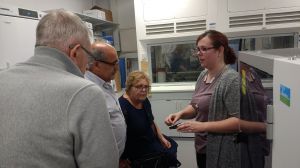 Following the talks the group were taken on a tour of the facilities to see how and where the research is carried out. It was an afternoon packed with great discussions with the group, and all researchers remarked on how valuable it was for them to have the chance to find out more about the experiences of people with Parkinson's.