OPDC featured on BBC One 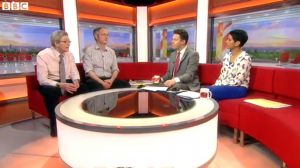 After being diagnosed with Parkinson's disease five years ago, Paul Mayhew-Archer one of the writers of Mrs Brown's Boys and The Vicar of Dibley, decided to find out what was being done to develop treatments. In the last few months, Paul has visited the OPDC to find out about our research where we aim to understand the molecular pathways of Parkinson's disease.

On Saturday 5th March 2016, Paul visited BBC One Saturday Breakfast News to promote an Inside Out special, 'Parkinson's: The Funny Side', which was shown on BBC One on Monday 7th March. Paul was joined by Professor Richard Wade-Martins, Principal Investigator of the OPDC, who talked about our research using stem cell technology to grow and study dopamine neurons from skin cells. The skin cells are taken by simple biopsy from people with Parkinson’s disease to identify potential targets for treatments.

The BBC One Saturday Breakfast News clip can be viewed here.