By bringing together cutting-edge stem cell technologies and computational biology, researchers at OPDC have developed a unique way to identify existing drugs that could potentially be repurposed for treating Parkinson’s. 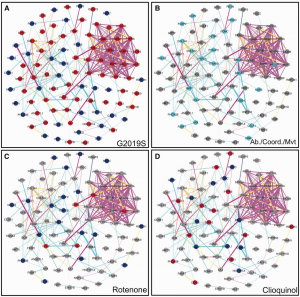 This promising research, published in the journal Human Molecular Genetics, uses a stem cell technique to turn a small piece of skin from people with Parkinson’s into dopamine-producing brain cells – identical to those that are lost in Parkinson’s. Researchers then studied the patterns of gene activity in these Parkinson’s brain cells and compared them to those observed in the same brain cell types grown from people of a similar age without the condition.

OPDC Investigator Dr Caleb Webber and co-lead author of the study, explains what they found:

The team used a global database which holds information about the effects of thousands of different drugs, many which are already in clinical use, to look for ones that could normalise the gene activity of the Parkinson’s brain cells.

They identified clioquinol – a drug which was first developed in the 1930s that is still used today in creams to treat skin infections. When taken orally, and over extended periods of time clioquinol can have serious side effects. Due to this, clioquinol as originally developed, is unlikely to be a future treatment for Parkinson’s. However, new drugs based on clioquinol may deliver the benefits without the risks.

“We’re excited by the power and precision of this new approach for identifying drugs that could be helpful for Parkinson’s. Because we’re able to tap into huge global databases of information about drugs, this is a short cut to laboriously testing each drug individually in the lab.

“It’s particularly exciting that this new approach immediately identified clioquinol – a drug whose properties are already being investigated for neurodegenerative conditions like Parkinson’s and Alzheimer’s.

“This gives us huge confidence that our approach works and we’re now excited to start unearthing more promising potential treatments for Parkinson’s.”

“There is a desperate need for new and better treatments for Parkinson’s, and this research opens up a unique and speedy avenue for identifying drugs and compounds that have serious potential.

“The crucial next step is to convert interesting leads like this one into effective treatments that can go forward to be tested in clinical trials.

“This is what we aim to do through the Parkinson’s UK Virtual Biotech, and we’re planning to invest £11million over the next three years to make new and better treatments a reality for people with the condition.”