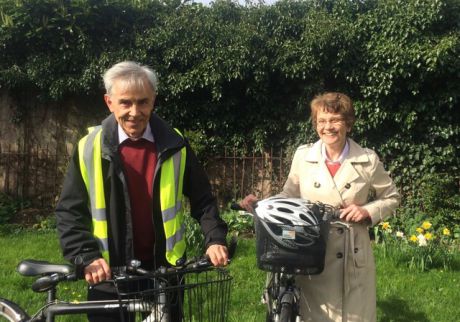 On 17th August 2017, OPDC supporters Nigel & Debbie Hamilton will set out on a 15 day bike ride that will take then from Oxford to Durham covering 350 miles.  They are aiming to raise some awareness and some funds for the Oxford Branch of Parkinson’s UK. The Branch is very much involved both with helping people who have the condition and with the important research being carried out at OPDC.

Nigel told us some more about the plans and motivations for their epic cycle:

"Since being diagnosed with idiopathic Parkinson’s seven years ago aged 64, I have learned quite a lot about the history of the disease in the two centuries from the year in which “An Essay on the Shaking Palsy” was first published by Dr Parkinson and now it seems that we are at a point when some major breakthroughs in the neurological sciences may become a reality. Progress is already being made in identifying and measuring the early signs of Parkinson’s and there is much more understanding of everything from the role of the gut to the role of the mitochondria. But at the same time the number of people afflicted with the condition is growing.

"So there seems to be good reason for as many PwP’s (People with Parkinson’s) as possible to get involved in supporting the research to arrest the progress of the disease, reverse the decline and find new ways to alleviate the symptoms. Our cycle ride of 350 miles is just a small way of contributing to this.

"As we set out on what we hope will be an enjoyable couple of weeks, we will endeavour to keep anyone interested in touch with our progress (or possible lack of it) via our blog (bit.do/gonorth).  More importantly if you can persuade anyone to sponsor us, we hope it will show that crazy things are still possible with the disease and generate a worthwhile total of funds raised."

Any contributions to Parkinson's UK will be welcomed, either online at http://uk.virginmoneygiving.com/NigelHamilton2 or email opdc.administrator@dpag.ox.ac.uk for details of how to send a cheque.