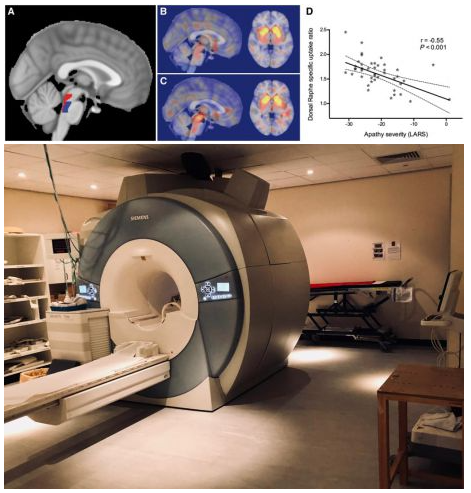 Last year, we published a paper showing that apathy is very common in people with idiopathic REM sleep behaviour disorder (RBD), and we have now followed this up with a brain imaging study that sheds light on why this is.

Apathy is a condition where people feel a sense of indifference to doing activities or being with other people. It is very common in people with Parkinson’s and can have a severe effect on their lives and those of their friends and family. Although apathy often occurs with depression, the two conditions are distinct and may have different treatments.

We recently showed that nearly half of patients with RBD have some degree of clinical apathy – interestingly, this is even higher than in patients with Parkinson’s, suggesting there may be a link between RBD itself and apathy.

To find out more, we performed MRI and DAT scans in 43 patients with RBD. DAT scans can measure the levels of dopamine and serotonin in the brain, two important chemicals that are affected by Parkinson’s. Because people with RBD have a high risk of developing Parkinson’s in future, we wanted to look at whether the level of these chemicals was already affected. We found that although some patients had reduced levels of dopamine in the brain, it was low levels of serotonin that were related to apathy. The region where the serotonin level was measured (an area of the brain called the dorsal raphe nucleus) is very close to the region that is involved in the causation of RBD, which may explain why RBD patients have a high rate of apathy.

Next, we plan to find out whether the same link between apathy and low serotonin levels is present in patients with Parkinson’s, and if so, whether medications that increase serotonin availability in the brain might improve symptoms of apathy.