A new collaborative study from the Oxford Parkinson’s Disease Centre led by Prof Stephanie Cragg and Dr Bradley Roberts has revealed that GABA transporters on astrocytes, the brain's lesser known yet critically important cells, support dopamine release and are sites of early dysfunction in parkinsonism.

The release of the neurotransmitter dopamine in the brain region called the striatum plays key roles in both our motivation and how we select our actions. This release is dysregulated across diverse disorders including Parkinson's and various addictions. Unravelling the mechanisms by which dopamine release in the striatum is governed, and understanding how these mechanisms might be dysfunctional in disease, is critical for identifying novel targets for disease-modifying therapies.

A new study funded by Parkinson's UK and published in Nature Communications led by Professor Stephanie Cragg and Dr Bradley Roberts, and in collaboration with the Oxford Parkinson’s Disease Centre, uncovers new observations about how non-neuronal cells in the brain, namely astrocytes, regulate striatal dopamine release and are sites of early dysfunction in Parkinson’s.

Dr Roberts said: "These findings are exciting as they uncover striatal GABA transporters and astrocytes, for the first time, as novel loci for governing dopamine output in striatum as well as sites of early dysfunction in Parkinson’s disease. These findings add to the recent growing body of literature implicating astrocytes and their transporters as sites of early dysfunction across neurodegenerative diseases, and could provide novel therapeutic targets for Parkinson’s disease."

Dr Beckie Port, Research Manager at Parkinson's UK said: “Identifying areas of the brain where the problems in Parkinson’s start, earlier, is a big step towards developing effective treatment. Armed with this knowledge, we are on our way to identifying specific targets within the brain and developing the next generation of treatments that can stop Parkinson’s in its tracks - something no current treatment can do. Parkinson’s UK is excited to be part of this promising research.” 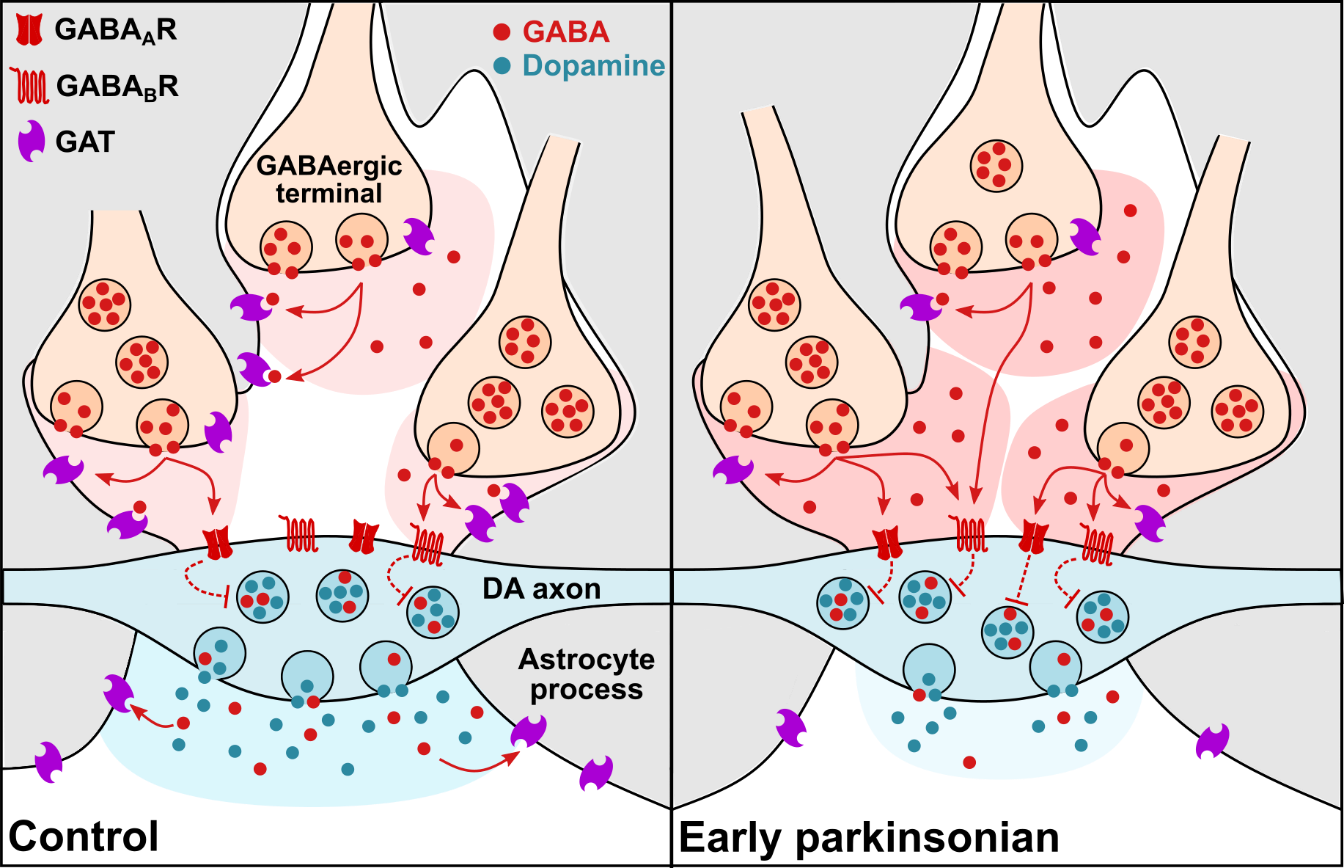 Image description: Under normal circumstances (control group), GABA released from GABAergic striatal neurons can spillover to act at GABA receptors on dopamine axons, inhibiting dopamine and GABA co-release. The level of GABA spillover and tonic inhibition of dopamine release is determined by the activity of GABA transporters (GATs) located on astrocytes, which remove GABA from the extracellular space. In a mouse model of early parkinsonism, striatal GAT expression is downregulated, resulting in augmented tonic inhibition of dopamine release by GABA. Co-release of GABA from dopamine axons is also reduced.

The full publication “GABA uptake transporters support dopamine release in dorsal striatum with maladaptive downregulation in a parkinsonism model” is available to read in Nature Communications.