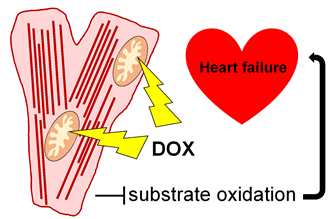 Chemotherapy has greatly improved cancer survival rates, especially in breast cancer patients. However, some chemotherapeutic drugs such as doxorubicin have side effects on the heart, and 5-10% of cancer survivors develop heart failure as a consequence of their cancer treatment. Unfortunately, it is not currently possible to predict which patient will suffer long-term heart problems due to their cancer therapy.

An imaging tool to screen patients regularly to check for early signs of toxicity on the heart is therefore desirable to detect any changes early and intervene with appropriate treatment. However, current clinical imaging is limited to detection of cardiac dysfunction, not prior toxic events. A recently developed imaging technique called “Hyperpolarized 13C Magnetic Resonance Imaging” allows us to assess real-time metabolic fluxes in vivo, and may therefore provide the ability to detect changes in mitochondrial metabolism and function in the doxorubicin treated heart. This technique has been pioneered in the UK in both the rodent and human heart by Professor Damian Tyler’s lab.

In a new paper from the Tyler Group, first authored by Dr Kerstin Timm, researchers show in a clinically-relevant rat model of doxorubicin-cardiotoxicity, that non-invasive imaging with hyperpolarized magnetic resonance can detect early changes in mitochondrial metabolism that precede functional decline in the heart. The research demonstrates that the decrease in metabolic flux is due to a loss of mitochondria as well as a decrease in mitochondrial respiration. Consequently, hyperpolarized magnetic resonance imaging could potentially be translated as a screening tool into cancer patients, allowing for early intervention to reduce the incidence of chemotherapy-induced heart failure.

Dr Timm said: "These are significant findings that could change the management of cancer survivors at risk from heart failure. Currently, heart failure medication is given to patients once they present with cardiac functional decline. Finding those patients at an earlier time point, before cardiac function is compromised, could lead to earlier therapeutic intervention and improve cardiovascular outcomes in cancer survivors."

The full paper “Early detection of doxorubicin-induced cardiotoxicity in rats by its cardiac metabolic signature assessed with hyperpolarized MRI” is available to read in Communications Biology.