A key hormone in the fetal liver has been found for the first time to play a critical role in determining iron endowment in the newborn baby. Up until now, widely held notions made in comparison to how the adult liver controls iron in the body have led to a common focus on how maternal iron status and function of the placenta determines a baby's iron status. A new study from the Lakhal-Littleton group reveals a more autonomous process takes place within the fetus than previously understood. 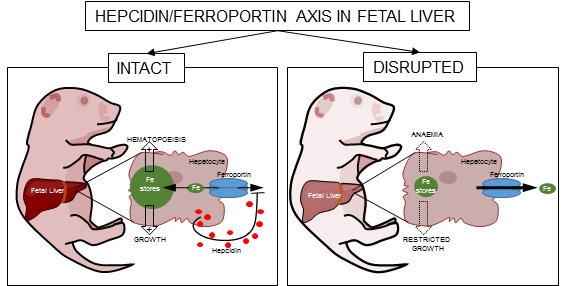 Historically, research into iron has focused on its role in the synthesis of haemoglobin, the substance in red blood cells that carries oxygen from your lungs throughout your body. However, in recent years evidence has been uncovered that iron plays an important role in many other physiological processes. For example, iron deficiency has been shown to impair cardiovascular function independently of haemoglobin levels in key Lakhal-Littleton lab papers in eLife and PNAS. In infancy, iron deficiency is associated with growth retardation and both motor skill and cognitive defects, because iron is required for the synthesis of myelin, an essential component of neurons, and also for rapid bone and muscle growth during childhood. While it is known that a liver-derived hormone called Hepcidin is responsible for regulating iron in the body, what is not well understood is the role it plays in the development of the unborn baby during pregnancy.

In the adult, it has been known for some time that hepcidin controls iron homeostasis by blocking the iron exporter ferroportin in the gut and spleen, which are sites of iron absorption and recycling respectively, thereby preventing iron from leaving these sites and being acquired into the bloodstream. Hepcidin is also present in the fetal liver, while ferroportin is found in abundance in the placenta, the organ where nutrients including iron are transferred from the mother to the fetus. Therefore, up until now, it has been widely accepted that the fetal liver controls iron availability to the fetus by operating in a similar manner to hepcidin in the adult liver; by blocking ferroportin in the placenta and thus preventing iron from being acquired into the mother’s circulation. This long-standing assumption heavily implies that fetal hepcidin is a negative regular of fetal iron levels.

A new paper from the Lakhal-Littleton lab has shown for the first time that fetal liver hepcidin does not control ferroportin in the placenta. Instead, the research reveals that fetal liver hepcidin acts cell-autonomously to block iron export out of fetal hepatocytes. This process enables the fetal liver to achieve rapid build-up of liver iron stores in the third trimester of gestation that is independent from both the iron status of the mother and from placental function. This key finding means that the fetal liver plays an active rather than passive role in determining iron endowment in the newborn. It can therefore be considered a positive regulator.

According to lead researcher Associate Professor Samira Lakhal-Littleton: “The fundamental misunderstanding is that the levels of iron endowment in newborns are dependent on the transfer of maternal iron into the fetus across the placenta. The fetal liver was seen as a passive bystander in this process. As such, studies concerned with understanding the determinants of newborn iron endowment have focussed on maternal iron status and on placental function.”

Iron deficiency is very common amongst pregnant women because of the high demand for iron during the third trimester. The team’s results present important implications for the medical advice given to women during this stage of pregnancy. Prof Lakhal-Littleton said: “The decision as to whether to supplement these women with iron is based on their haemoglobin levels rather than on any measure relating to fetal iron status. The present study highlights the need to consider fetal iron levels in this process. This is not done currently because it is assumed that fetal iron status is entirely dependent on maternal iron status. Our study challenges that assumption.”

“Up to now, clinicians have not been concerned with measuring fetal hepcidin. This can be done in cord blood. There is evidence that inflammatory conditions that occur during pregnancy affect maternal hepcidin levels, such as preeclampsia. What we need to understand is how fetal hepcidin is affected in these conditions, and whether changes in fetal hepcidin contribute to the developmental defects associated with such conditions.” (Prof Lakhal-Littleton).