My research interests lie primarily in the anatomical and functional connectivity of supra-and infragranular cortical projection neurons and the wiring principles of developing cortical networks.

During my DPhil, I continue my quest to discover whether the activity of glutamatergic pyramidal neurons plays a role in regulating the organisation of inhibitory interneurons in the cortex and thus, dynamically control the development of pyramidal-interneuron circuits. By abolishing calcium-dependent neurotransmitter release in excitatory projection neurons, my DPhil project seeks to explore how activity-dependent mechanisms drive the maturation of cortical GABAergic interneurons and whether the dynamic interactions between pyramidal cells and interneurons are dependent on synaptic transmission or regulated by trophic factors. I am jointly supervised by Professor Dr. Zoltán Molnár and Dr. Anna Hoerder-Suabedissen. My DPhil is funded by the Anatomical Society PhD Research Studentship.

Confocal images showing injection sites of Cre-dependent AAV-helper and ΔG-mCherry rabies virus in Drd1a-Cre mice. Injection site analysis confirmed the selectivity of the Drd1a-Cre transgenic line to trace the adult input connectivity of layer 6b projection neurons as the anatomical distribution of starter neurons were exclusively confined to cortical layer 6b. Section A serves to illustrate the selective labelling of Cre-expressing GFP+ TVA+ starter neurons in V1 of layer 6b across the injected brains. B shows that rabies virus injection was successfully targeted and revealed mCherry-expressing neurons in V1. C and D confocal merged images illustrate coinfection and the presence of double-labelled genuine starter neurons in layer 6b. D representing GFP+ only and GFP+ mCherry+ starter cells taken at higher magnification (20x).

This research project was carried out in collaboration with Associate Professor Andrew Sharott's group at the MRC Brain Network Dynamics Unit at the University of Oxford. I hereby would like to thank and acknowledge the work of Naomi Berry and my co-supervisor, Dr. Anna Hoerder-Suabedissen, for performing the stereotactic virus injections and contributing to the research project. I would also like to thank my supervisor, Prof. Dr. Zoltán Molnár, and Prof. Andrew Sharott for designing the experiments and providing guidance and assistance throughout the research project. 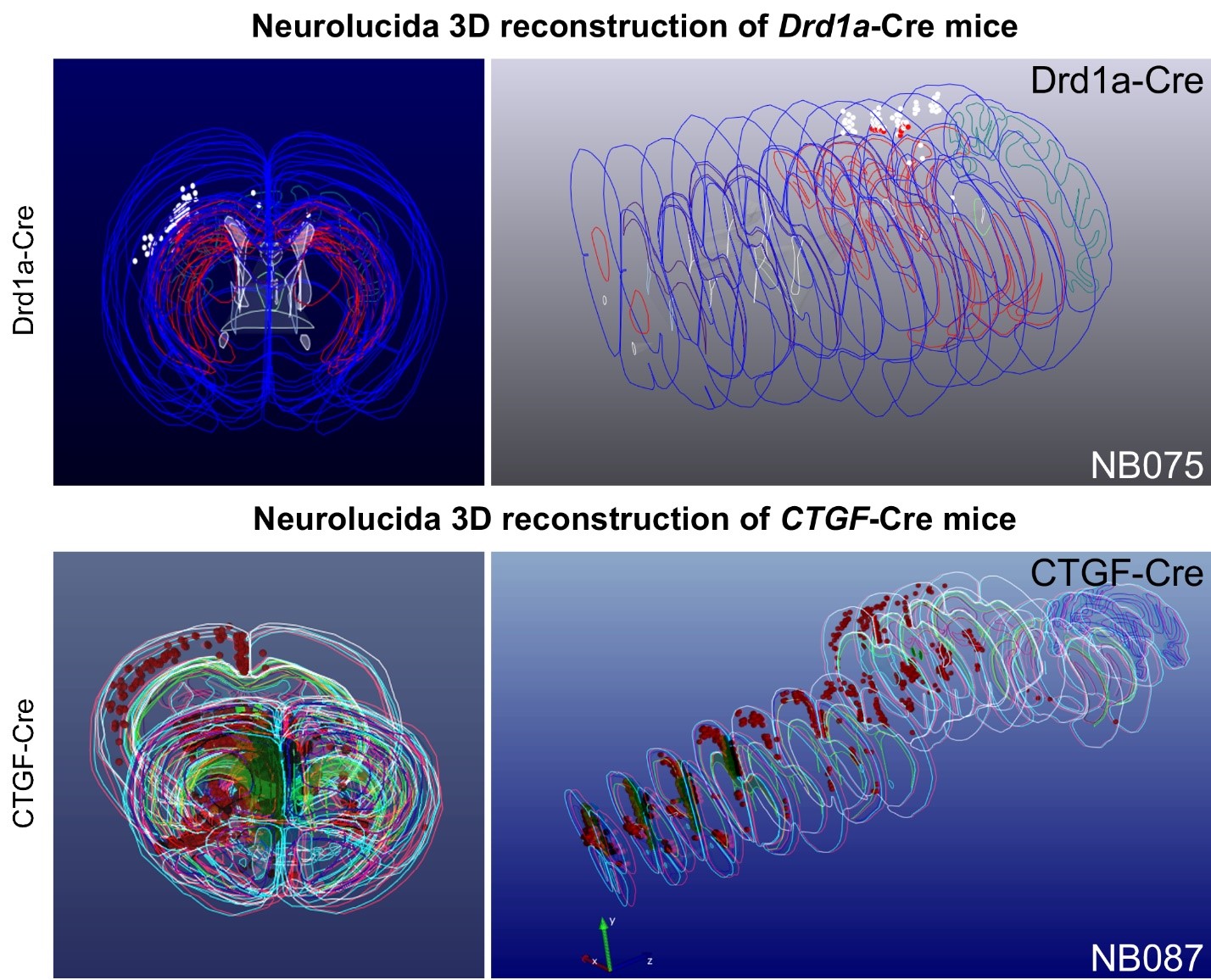 My unusual journey into neuroscience began with an introduction into neurolinguistics while I was majoring in Theoretical & Applied Linguistics at Eötvös Loránd University of Sciences in Budapest. Learning about developmental language disorders and understanding the neuroanatomical origin of dyslexia made me ponder on questions concerning the inner workings of the human brain. Thus, after completing my Bachelor of Arts degree in English and American Studies with distinction at Eötvös Loránd University of Sciences, I started a Bachelor of Sciences degree in Biology at the University of Szeged, Hungary.

First, I undertook a summer internship at the Laboratory of Cellular Neuropharmacology at the Institute of Experimental Medicine of the Hungarian Academy of Sciences (IEM-HAS) headed by Dr. János Szabadics who has been conducting pioneering work on the neural circuitry of the hippocampus. Following my introduction into in vitro electrophysiology, I completed another laboratory placement at the research group of Dr. Péter Barthó at the Research Centre for Natural Sciences of the Hungarian Academy of Sciences (MTA TTK) and worked on the role of sleep spindles and oscillations. This lab placement introduced me into thalamocortical research and aroused my interest in the role of cortical feedback in the population activity of the thalamocortical system.

My interests in sleep research and cortical networks led me to join a research project at the Department of Physiology, Anatomy and Neuroscience at the University of Szeged that investigated the innervation pattern of basal forebrain non-cholinergic cells from cortical and subcortical areas implemented in the regulation of sleep-wake cycles. As an undergraduate research student of the Institute of Experimental Medicine of the Hungarian Academy of Sciences (MTA KOKI), I then continued to work on the circuitry of the basal forebrain at the Laboratory of Systems Neuroscience. The primary aim of my research project was to unravel the role of basal forebrain cholinergic neurons in associate and reward-related learning.

After having been awarded a research scholarship by the Tempus Foundation, I moved to Oxford as a visiting student at the Department of Physiology, Anatomy and Genetics where I joined Professor Dr. Zoltán Molnár's group to undertake a research project investigating the synaptic connectivity of deep-layer cortical projections neurons. Using rabies virus-assisted retrograde tracing, we mapped the monosynaptic inputs onto a subset of layer 6b neurons that selectively innervate higher-order thalamic nuclei.

Following my undergraduate thesis project in Oxford, I was awarded a postbaccalaureate research fellowship and relocated to the United States to join Dr Hiroki Taniguchi’s group at the Max Planck Florida Institute for Neuroscience. I continued to work on the development of inhibitory cortical circuits and developed a profound interest in researching the dynamic interaction between glutamatergic pyramidal neurons and cortical GABAergic interneurons. My research project sought to decipher the role of pyramidal neuron identity in recruiting interneuron inputs and discover the molecular and genetic factors that determine the precise wiring of cortical inhibitory circuits.