The transient blueprint of the brain

A new collaborative review between DPAG’s Professor Zoltán Molnár, Professor Patrick Kanold (Johns Hopkins University Department of Biomedical Engineering and Kavli Neuroscience Discovery Institute) and Professor Heiko Luhmann (University Medical Center of the Johannes Gutenberg University Mainz) gives a comprehensive overview of the transient neuronal circuits in both the cerebral cortex and in the thalamus, the circuits that relay and process most of the information from our sensory environment. The paper comes in response to the last two decades of developmental neuroscience research, during which a major focus has been on genetics, whereas the fundamentally important role of electrical activity from the earliest stages of brain development has only recently become evident. This review draws from each author’s research across the last three decades to demonstrate that during early development of the mammalian brain, transient neuronal populations integrate spontaneous and externally generated activity patterns to form mature cortical networks.

Crucially, the early transient circuits both process and produce activity patters that are vital for further maturation of the central pathways. Consequently, the sensory nervous system feeds into circuits that are pre-formed to some extent. The review demonstrates that it is vitally important to better understand the transition from early transient to permanent neuronal circuits, as impairments at the earliest stage of brain development can lead to the development of neurological and psychiatric conditions several years or even decades after altered development. These early impairments, namely genetic abnormalities or early pathological conditions such as intrauterine infection, drug exposure or mild hypoxia, may potentially influence and disturb early brain activity and cause cortical miswiring at later stages of development. The difficulty is that examining brains at the time of diagnosing a neurological or psychiatric disorder does not inform clinicians what happened during development. “Given the brain’s amazing ability to change, what we see is the brain’s long-term response to an early event. Moreover, given that the early transient circuits go away, we cannot even see what happened to them in early life. Thus, there is a crucial gap in our knowledge.” (Professor Kanold).

There is hope, however, for a potential therapeutic solution. According to Professor Kanold: “During development, sensory evoked activity slowly takes over from spontaneous activity. Thus, controlled sensory stimulation might be able to alter the developmental trajectory. A key step forward is to first sharpen our diagnostic tools to detect changes in early spontaneous activity. Thus, translational studies are a high priority.” Professor Molnár added: “The developing brain has exceptional reserves.  The brain evolved to be able to adapt to its environment, but the cost was that there is a relatively protracted and vulnerable developmental period.”

On how an improved understanding of the developing brain can help identify ways to prevent abnormalities, Professor Molnár said: “The challenge is to link anomalies of early circuits to these conditions. Some alterations in the circuit does not manifest since there are spectacular reserves in the central nervous systems. Others lead to devastating conditions, such as intractable epilepsy and severe learning difficulties. The challenge for the basic researcher is to identify the key parameters to monitor in the clinic. We still have a long way to go to establish the best practice to manage neonatal hypoxia-ischemia, foetal alcohol syndrome, maternal drug abuse and intrauterine infection. These insults act on highly complex and integrated events of brain development, some of these rely on transient circuits involving transient elements. Imagine that one has to build a complicated building. This requires elaborate transient scaffolds.  If there are issues with the building work, one can’t understand what went wrong unless we also look at the scaffolds. Sometimes you can’t remove the scaffold because the building work went wrong and without the scaffold the building would collapse.  Residual scaffolds could indicate issues with the permanent building itself."

Image Legend: Subplate neurons form a transient, dynamic scaffold in the developing brain. These neurons are born early and if birthdated with a marker they are present in large numbers before birth (Figure 1A) and are also immunoreactive for microtubule-associated protein 2 (right panels).  However, shortly after birth these neurons start to disappear and both with birthdating and with MAP2 immunohistochemistry only scattered interstitial white matter neurons remain (B). Images are from Chun and Shatz (1989) and Luskin and Shatz (1985) used with permission of Dr Carla J. Shatz.

"We review the elaborate mechanisms behind how these transient scaffolds are established and used during brain development and how they change when there are alterations in the building work or there is altered sensory input. We build on the pioneering work of Ivica Kostovic and Carla Shatz” (Professor Molnár).

Dr Carla Shatz ForMemRS, Sapp Family Provostial Professor of Biology and Neurobiology at Stanford University, who delivered DPAG's prestigious 2019 Charles Sherrington Prize Lecture, said: "Transient but essential: This transient blueprint of the cortex, if damaged, can leave a lasting trace in brain circuits that affects function long afterwards. It’s like builing a house: the subplate is a scaffold needed to support the home’s permanent structure while it is forming. If the scaffold is damaged, for example if subplate neurons die too early due to hypoxic damage or inflammation, brain circuits between the thalamus and cortex fail to form properly. This failure is very evident in animal models, but in children the altered connectivity is “invisible” using current imaging techniques. Yet, these changes may explain developmental learning disorders associated with hypoxic, ischemic injury to the developing baby in utero or at birth."

Professor Ivica Kostovic, Honorary Director of the Croatian Institute for Brain Research, said: "It is fascinating to realise that before the pregnant woman starts to feel the baby move (around 16 to 20 weeks), the fetal cortex already displays its first transient spontaneous functions. Based on their three decades research, Prof Molnár, Prof Kanold and Prof Luhmann identified transient circuitry in subplate and marginal zones as the underlying basis for both non-synaptic and synaptic spontaneous and externally generated activity. In their collaborative review, the evidence was presented about the onset of spontaneous activity, transitional period towards permanent circuitry and its crucial role in the establishment of cortical organisation and large-scale networks. Besides spontaneous and sensory driven activity during development, transient cortical circuits, via robust thalamocortical relationships, may modify peripheral inputs and induce different transcriptional profiles in targeted cortical neurons. The crucial importance of the transitional period between transient and permanent circuitry, which occurs in humans during the preterm period, is discussed in terms of the relationship between transient and permanent; endogenous and sensory driven; spontaneous and evoked; and silent and active synapses. This significant review brings us closer to a far-reaching conclusion for answering how and when different etiological factors (genetic abnormalities, intrauterine infection, drug exposure or mild hypoxia) can damage transient intrauterine circuitry and cause neurodevelopmental disorders such as schizophrenia, autism and cognitive disabilities later in life."

Ultimately, the authors hope their review can help to remove two preconceived notions many people may hold about the developing brain.

Professor Molnár said: “The developing brain is not just a smaller version of the adult brain. The abnormalities require very different therapeutic interventions that have to consider the specific steps of early development. These interventions are key to improve the chances of recovery. We made some progress over the last two or three decades, but we are still very far from elevating the platform from which we can tackle numerous brain developmental conditions that can have impact on the life of the individual and their family for the rest of their lives.”

Professor Luhmann said: “The key takeaway is that our brain at birth is not a tabula rasa. When a newborn child opens the eyes for the first time, the brain is already prepared to process this information, although it takes months to reach the full capacity of vision. In the cerebral cortex, the outer mantle of our brain, the same neuronal modules and activity patterns are transiently present to generate “a ready to go” network. So, neuronal activity is important much earlier than previously thought and we have to understand which factors control and modify this activity.”

The full review “Transient cortical circuits match spontaneous and sensory-driven activity during development” can be read in “Science”. DOI: 10.1126/science.abb2153. 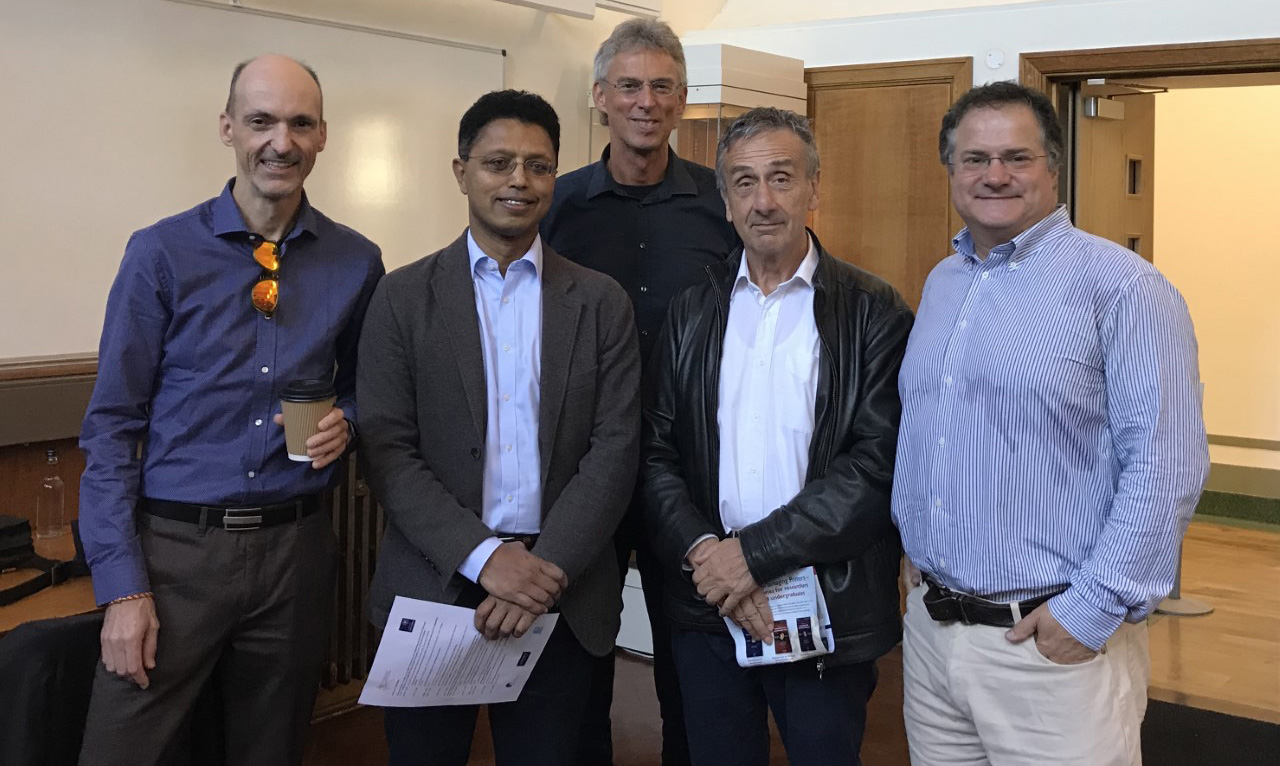 Kostovic I (2020) The enigmatic fetal subplate compartment forms an early tangential cortical nexus and provides the framework for construction of cortical connectivity. Progress in Neurobiology, 101883.