Switch with a spring: a new model for sleep regulation

New collaborative research led by the Vyazovskiy Group has shed new light on the role of the hypothalamus in the transition between sleep and wake states.

Our current understanding of how sleep is regulated is based on two well established scientific models. The model of sleep homeostasis defines a variable called Process S as a measure of sleep need, and the so-called "flip-flop" model of state switching builds on the notion of a mutually antagonistic relationship between subcortical sleep-promoting and wake-promoting circuits. Since the pioneering observations by Constantin von Economo in patients with encephalitis lethargica, known as “sleeping sickness”, 100 years ago, numerous laboratories have worked extensively to understand how sleeping and waking is controlled. More specifically, this research has focused on the anatomical and functional characterisation of subcortical and cortical substrates of sleep-wake control. However, one difficulty is that sleep and wakefulness are not simple, homogenous all-or-none states. In fact, they represent a spectrum of sub-states, distinguished by behaviour, levels of arousal and brain activity at the local and global levels.

A new study from the Vyazovskiy Group has focused on the question of how wake “quality” is related to sleep need. To interrogate this question, the team targeted the lateral preoptical (LPO) hypothalamus, which is responsible for controlling the brain’s arousal signals that trigger the transition between sleeping and wakefulness. Researchers found that optogenetic stimulation of GABAergic neurons within this region of the hypothalamus does not simply trigger a “global” state switching, but results in varied levels of wake that are characterised by increased levels of arousal. In turn, the occurrence of such “higher intensity” wake state results in increased sleep need, as measured by EEG slow-wave activity (SWA).

Lead researcher Professor Vladyslav Vyazovsky said: “We found that the hypothalamic circuitry is not just confined to switching between all-or-none global states of vigilance, as it is typically portrayed (and became a textbook knowledge), but it is rather responsible for regulating the qualitative dimension of wakefulness and sleep.

This kind of tuning process may be reflected in varied levels of behavioural and/or brain activation, and, possibly, also has relevant peripheral manifestations, such as changes in metabolic rates. We posit that it is not just time spent awake per se, but wake “intensity” or “quality” that ultimately determines the rates of build-up of homeostatic sleep pressure and propensity for state switching, i.e., what is typically referred to as “sleep need”, in a more ecological way.”

On the basis of this new data, the Vyazovskiy Group proposes a novel concept they call the “switch with a spring” model. To illustrate the new model, Professor Vyazovskiy said: “When wakefulness is especially “intense”, active, or characterised by high levels of arousal, the “spring” becomes more compressed with time spent awake, and therefore the subsequent sleep is also more intense to release the "pressure". By contrast, wake in a relaxed state with little physical, mental or metabolic activity will give rise to a less compressed spring, resulting in a reduced pressure for sleep. This possibility has long been suspected, but the underlying neurophysiological substrates remained unknown. Now we demonstrate that inhibitory neurons in the lateral preoptic area of the hypothalamus establish this key link between levels of wake intensity and sleep need.”

This study was performed in collaboration between the Sleep & Circadian Neuroscience Institute (SCNi) and DPAG researchers, including Professors Russell Foster, Ed Mann and Vladyslav Vyazovskiy. The experiments were led by Dr Tomoko Yamagata, currently an Assistant Professor at Toho University, Japan and Dr Martin Kahn, former DPAG DPhil student and currently a Postdoctoral Fellow at the MIT, USA.

The full paper “The hypothalamic link between arousal and sleep homeostasis in mice” is available to read in PNAS. 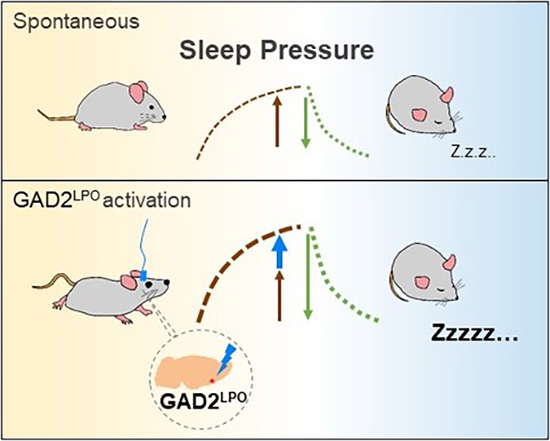