According to Fernando García-Moreno and Zoltán Molnár understanding development and evolution of the neocortex has important implications. Differential timing of developmental events sculpts the brains of different species into distinct organs. The latest investigations on the development of the dorsal forebrain in chick and mouse embryos showed a major difference between vertebrate brains. A delay in the neurogenic properties of a subset of progenitors is specific to mammals and could be responsible for the evolutionary origin of the corpus callosum... 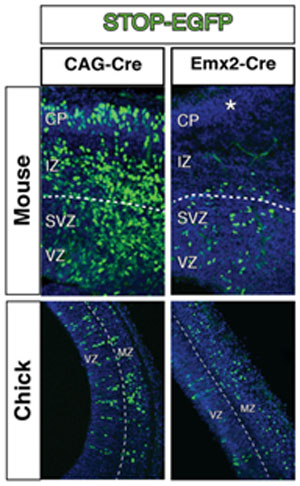 Fernando García-Moreno and Zoltán Molnár publish a paper in PNAS, Subset of early radial glial progenitors that contribute to the development of callosal neurons is absent from avian brain, showing an interesting divergence of the embryonic development of the forebrain of vertebrate species.

The classical view of mammalian cortical development suggests that pyramidal neurons are generated in a temporal sequence, with all radial glial cells (RGCs) contributing to both lower and upper neocortical layers. A recent opposing proposal suggests there is a subgroup of fate-restricted RGCs in the early neocortex, which generates only upper-layer neurons. Little is known about the existence of fate restriction of homologous progenitors in other vertebrate species. We investigated the lineage of selected Emx2+ [vertebrate homeobox gene related to Drosophila empty spiracles (ems)] RGCs in mouse neocortex and chick forebrain and found evidence for both sequential and fate-restricted programs only in mouse, indicating that these complementary populations coexist in the developing mammalian but not avian brain. Among a large population of sequentially programmed RGCs in the mouse brain, a subset of self-renewing progenitors lack neurogenic potential during the earliest phase of corticogenesis. After a considerable delay, these progenitors generate callosal upper-layer neurons and glia. On the other hand, we found no homologous delayed population in any sectors of the chick forebrain. This finding suggests that neurogenic delay of selected RGCs may be unique to mammals and possibly associated with the evolution of the corpus callosum.

FIGURE: Mammalian but not avian forebrain stem/progenitor cells labelled through Emx2 promoter sequence show delayed neurogenesis.
Top row - Examples of the distribution of the cortical neurons in mouse E14, 2 days after electroporation with general and Emx2 promoter construct at E12.
Bottom row - Chick cases at E6, 2 days after electroporation at E4.
Left column - Labelled with EGFP, early progenitors of the forebrain generated neurons that migrated to the postmitotic areas (CP: cortical plate; MZ: mantle zone).
Right column - Also labelled with EGFP, early progenitors selected by their expression of Emx2 did not generate neurons in mouse (observe the absence of green cells in CP) but were neurogenic in chick (green cells were present in MZ).

Stem cells with delayed neurogenesis and the evolution of callosal interhemispheric connections in the mammalian brain, Article on the Human Frontier Science Program website.