Collaborative Cancer Research UK-funded studies from DPAG and Oncology researchers have uncovered a new mechanism by which cancer cells adapt to the stresses they encounter as they grow and respond to therapies.

Researchers from the Goberdhan and Wilson groups, in collaboration with the Department of Oncology, have uncovered a new mechanism by which cancer cells adapt to the stresses they encounter as they grow and respond to therapies. This mechanism involves cells releasing small vesicles, known as exosomes. These contain complex mixtures of proteins, RNAs and other molecules, which can reprogramme surrounding cells. Exosomes are thought to be released by all cells within the body, and play important roles in many processes in healthy individuals such as immunity and reproduction. But, in cancer they can turn bad and drive pathological changes such as tumour growth and metastasis.

Up until now, research has suggested that exosomes are made in compartments in cells known as late endosomes, which are also used to keep cells healthy by clearing out damaged proteins and structures in the cell. By combining complementary analysis in fruit flies and human cancer cells, the collaborative teams have shown that exosomes are also made in the cell’s recycling system, which diverts reusable proteins away from the waste disposal system. They are called Rab11a-exosomes and carry a different set of cargos that may help cancers to grow and survive current treatments.

As a tumour grows bigger, the cells within it are starved of key nutrients such as amino acids, and these stressed cells produce Rab11a-exosomes loaded with molecules made by the cancer cells. According to Associate Professor Deborah Goberdhan, who led the research: “These ‘bad exosomes’ can then give other cells around them a growth-promoting boost and can potentially lead to selection of more aggressive cell types and a worse outcome. The production of Rab11a-exosomes may explain why some patients don’t respond to certain treatments and why others frequently develop resistance to therapies.”

“It’s becoming increasingly clear that anti-cancer therapies that block growth may need to be given in combination with drugs that prevent tumour cells adapting to the therapy, and reducing the production of these exosomes might be one important way to do this.”

“A key step will be to work out how the bad exosomes that drive cancer progression are made, so that therapies can be designed to block them. This is likely to take some time. However, developing ways to detect these exosomes in patient blood is an important shorter-term goal. Such an approach might detect cancer at early stages or predict how patients will respond to drugs, both of which could have a major impact on cancer survival and the design of more personalised treatments for patients.”

Dr Emily Farthing, Senior Research Information Manager at Cancer Research UK said: “This exciting research has discovered that exosomes can act in a way we weren’t previously aware of, which could be helping tumours to grow and become resistant to anti-cancer treatments. This lab-based work is still a long way off benefitting people with cancer, but provides helpful clues to how we might be able to tackle the disease in new ways in future.”

The newly published research has already attracted further funding to start screening for these alternative exosomes in patients, and a major current focus of the team is to identify ways of blocking their production, so that their role in cancer pathology can be fully assessed.

Prof Goberdhan said: “By continuing to combine analysis in human cancer cell lines and flies, we have started to highlight genetic manipulations that appear to specifically block the production of Rab11a-exosomes, which we are now following up.”

The study is a collaboration between the groups of Associate Professor Deborah Goberdhan and Professor Clive Wilson from the Department of Physiology, Anatomy and Genetics, and Professor Adrian Harris from the Department of Oncology, at The University of Oxford. This work has benefitted from additional funding from the Biotechnology and Biological Sciences Research Council (BBSRC), the Breast Cancer Research Foundation, the Wellcome Trust and the National Institute for Health Research (NIHR).

In this video, Prof Goberdhan outlines the key findings of "Glutamine deprivation alters the origin and function of cancer cell exosomes." The full paper is available to read in The EMBO Journal: 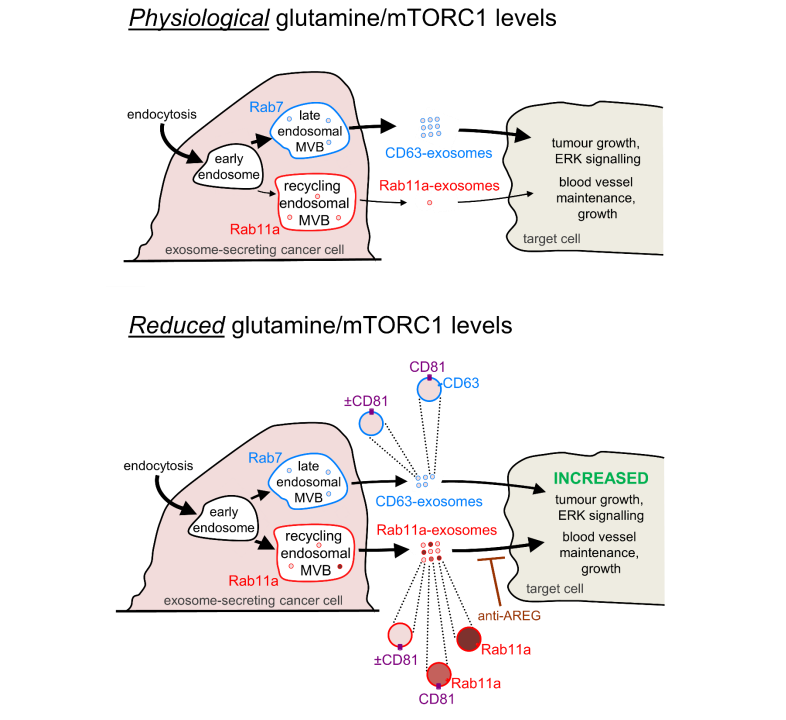 This story is also reported on the University of Oxford website and the Cancer Research UK Oxford Centre website.

Prof Deborah Goberdhan was interviewed for BBC Radio Oxford News. The story can be accessed via the below two links on BBC Sounds: