Drug could aid recovery after a heart attack

Drugs currently undergoing development to treat anaemia could be repurposed to help prevent people with type 2 diabetes from developing heart failure, according to new research funded by the British Heart Foundation (BHF) and Diabetes UK.

In the study, published in the Journal of the American College of Cardiology, researchers found that, after a heart attack, a protein called HIF acts to help heart cells survive.

In people with diabetes, fats accumulate within the heart muscle and stop the HIF protein from becoming active. This means that a person is more likely to suffer lasting heart muscle damage, and develop heart failure after a heart attack.

Researchers in DPAG treated diabetic rats with a drug known to activate the HIF protein, and were able to encourage the heart to recover after a heart attack. Further work is needed to see whether the same process can be replicated in people.

However, these initial results suggest that several drugs known to activate HIF - and currently undergoing phase III clinical trials to treat people with anaemia - could also be given to people with diabetes immediately after a heart attack.

Nearly 3.7 million people in the UK have been diagnosed with diabetes, a condition that puts people at much higher risk of developing heart and circulator disease. In the UK there are nearly 200,000 hospital visits each year due to heart attacks. It is estimated that nearly a fifth (18.6%) of people who have a heart attack in the UK, also suffer from diabetes (1).

Associate Professor Lisa Heather, a BHF research fellow here at DPAG, who led the research, said: “After a heart attack, people with type 2 diabetes are more likely to develop heart failure more quickly, but we have not fully understood the reasons why that is the case.

“What we have shown with this research is that diabetics’ metabolism means they have higher levels of fatty acids in the heart. This prevents signals going to the heart protective protein telling it to ‘kick-in’ after a heart attack.

“But what is perhaps most exciting, is that existing drugs - currently being trialled for people with blood disorders - can reverse that effect and allow the protein to be activated after a heart attack.

“This opens the possibility that, in the near future, we could also use these drugs to help treat diabetic heart attack patients.”

Professor Jeremy Pearson, Associate Medical Director at the British Heart Foundation, which part-funded the research, said: “This research in rats has not only identified the mechanism that could explain why people with type 2 diabetes to have poorer outcomes after a heart attack, but also a practical way this might be prevented.

“Further studies will be needed to confirm if we see the same benefits in humans. But if we can reactivate the body’s own defence system we may be able to reduce the damage caused by a heart attack and improve people’s quality of life.” 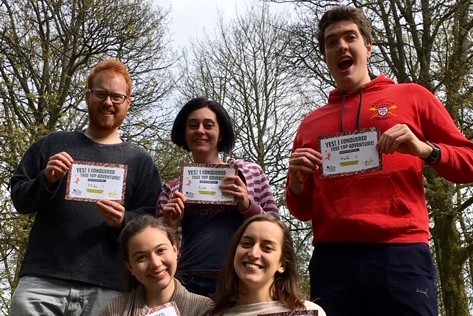 The team behind the research

The article has also been covered in the Guardian and the Express.