On 7 July 2016 the DPAG cricket team were victorious against IT Services, Anant Parekh and Pradeep Kumar report: 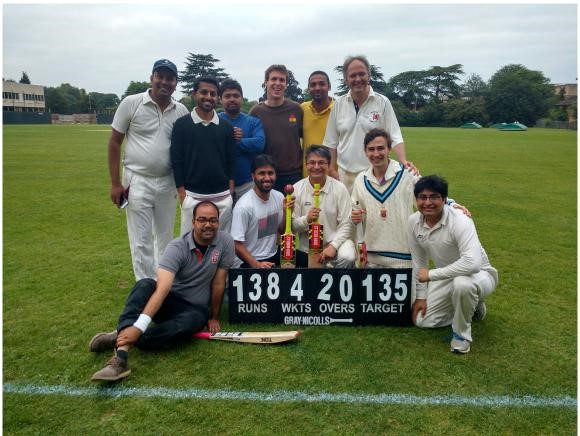 In a nail-biter of a match that could easily have graced the IPL in terms of excitement, DPAG overcame a strong IT services team with the outcome uncertain until the last ball. Under slightly overcast skies, DPAG won the toss and captain Pradeep Kumar elected to bowl. Tight seam bowling by opening pair Richard Wade-Martins and Gulzar followed by Pradeep and Ben Kroeger reduced IT to 27-3 after 6 overs.

Quick running combined with some big hitting (and a few fortuitous edges) enabled IT to accelerate, reaching 100 with no further loss after 14 overs, despite good bowling by Satish Arcot Jayaram, Sundeep Teki and Anantharam Devaraj. A combination of pace at one end by Pradeep and off-spin at the other by Anant Parekh applied the brakes with each bowler accomplishing two wickets in an over. Good fielding in the deep by DPAG throughout, particularly by Richard Tyser, Pulak Kar and Gaurav Das restricted IT to 134 off 20 overs, when a target in excess of 150 looked feasible. Wickets were shared between Pradeep (3-13), Anant (2-12), Gulzar (1-16) and Richard WM (1-17), each bowling the maximum permitted 3 overs.

As the light deteriorated, DPAG got off to a quick start with Sundeep and Anantharam scoring freely. Anantharam hit some beautiful shots through cover and mid-wicket before retiring, having reached the maximum permitted score of 30 (33). This is the third time in a row that Anantharam has reached 30, a remarkable accomplishment. Ben, Gulzar and Anant kept the score ticking over, but tight seam bowling by IT slowly swung the momentum back in their favour. Needing almost 50 of the final 5 overs, Pradeep struck some mighty blows, blasting his way imperiously to 30 after just 17 balls; a captain’s innings.

IT came back though, increasing the pressure on new batsmen Pulak and Richard Tyser, who took several quick singles as the light deteriorated rapidly. With 7 required to win off the final two balls, Richard ensured victory with two boundaries. Fielding eleven players from Sherrington, Le Gros Clark and CNCB, DPAG played extremely well as a unit with accurate bowling, commitment in the field and composed batting. The only negative was the injury to Gaurav, suffered as he dived to save certain four.

All in all, an excellent performance by DPAG!