Dr Sybil Cooper (1900-1970) came to Oxford in 1927 following receiving her PhD from the University of Cambridge. She became a research student, then research fellow, at St Hilda's College, with physiologist Sir Charles Sherrington while working as a Demonstrator in Anatomy. She resigned her position in 1934 and had the first of her four children the following year. Able to afford household help, she took an unpaid position as a lecturer in natural science at St. Hilda's College in 1940 and received a paid position as a research fellow there in 1946 that she maintained until her retirement in 1968. She was instrumental in the beginnings of Marianne Fillenz's research career, co-supervising her DPhil in the Laboratory of Physiology from 1950. After her retirement, she continued working in the Physiology Lab until autumn of 1969.

She collaborated with her husband, the physiologist R. S. Creed, on muscle reflexes before and after the birth of her children. "Demonstrating great ability in dissecting minute sense organs with intact nerves, she recorded nerve activity. As an excellent histologist, Cooper fixed, stained, and examined the microstructure of the sense organs. Alone and with colleagues, she made advances in understanding how the muscle spindles functioned relative to their structure." (Ogilvie, Marilyn & Harvey, Joy, The Biographical Dictionary of Women in Science: Pioneering Lives From Ancient Times to the mid-20th Century, 2000). 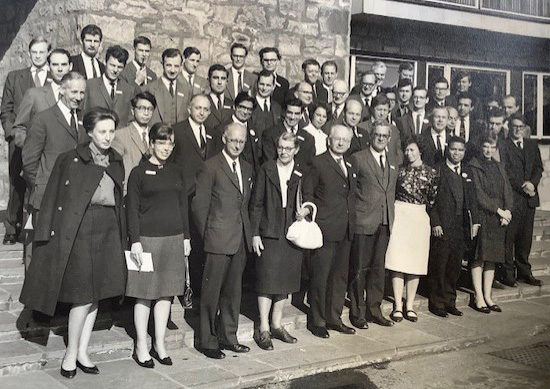 © With thanks to Dr Hilary Brown for this group photograph taken at a meeting on muscle control held in Dundee in September 1965. Dr Sybil Cooper is in the front row holding a large pale-coloured bag.