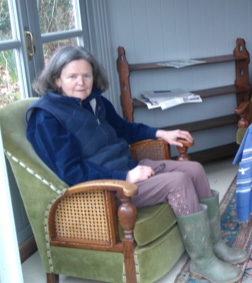 Dr Susanna Blackshaw BSc, MA, PhD joined the Department of Human Anatomy and Genetics in 1998 as University Lecturer in Anatomical Science alongside an appointment to the Muriel Tomlinson Fellowship in Preclinical Science at St Hilda’s College. In 1999, she was awarded the title of Reader in Neurobiology in the Department. Prior to Oxford, she had held the post of Reader in the Institute of Biomedical & Life Sciences, Division of Infection and Immunity, at the University of Glasgow.

The Blackshaw Lab was interested in repair of the nervous system, and in how, at a molecular level, a nerve cell responds to injury and regrows its processes to restore function. Dr Blackshaw and her team used the nervous system of the medicinal leech as their experimental organism, a simpler system than the mammalian central nervous system, and its demonstrated capacity for repair facilitated studying the molecular basis of successful repair. Her lab was the first in the world to construct a genetic library from a known type of nerve cell.

To identify genes whose expression is regulated immediately after injury, Dr Blackshaw developed techniques for constructing genetic libraries from small numbers of nerve cells of known type, or from ganglia. In doing so, her team identified novel genes, such as REN3 and SPTR (exclusively expressed in invertebrates), as well as genes of known or predicted function that are widely expressed in both invertebrate and mammalian cells, such as thioredoxin and tubulin. They also identified mammalian cell genes, such as Cysteine Rich Intestinal Protein (CRIP), whose role in the regeneration of adult neurons is unknown. “Thus our approach has enabled us to identify a panel of known and novel genes, present in neurons of known function, that are regulated within hours of axotomy, and may underpin the intrinsic ability of invertebrate neurons to survive damage and initiate regrowth programs.” (Dr Blackshaw).

Alongside this research, the Blackshaw Lab investigated specific genes that encode known proteins required by a regenerating neuron for rebuilding its axon. In collaboration with researchers at Dartmouth Medical School in the USA, Dr Blackshaw and her team were able to identify the four genes responsible for encoding voltage-gated sodium channels in the leech. They also showed that individual neurons express more than one isoform of the channel, and that there are cell-specific patterns of expression.

After being awarded Research Leave from 2002-04 under the Medical Faculty of the University's Special Paid Leave Scheme, in 2006, Dr Blackshaw was appointed Junior Pro-Proctor at the University of Oxford. On her retirement in 2009, Dr Blackshaw was made a Supernumerary Fellow of St Hilda’s College, Oxford, a Fellowship she retains today.