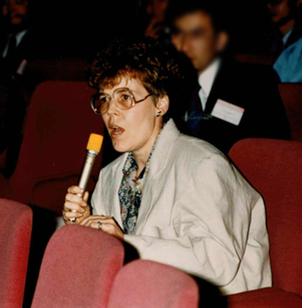 Dr Susan Noble DPhil first came to the Laboratory of Physiology in 1959, undertaking a degree in Physiology tutored by Jean Banister. Illness forced her to withdraw from the course after two years, but she was later able to complete her undergraduate studies at University College London. She returned to Oxford in 1965 following her marriage to Professor Denis Noble, who was appointed to a University Lectureship in Physiology, and Jean Banister soon secured her funding for graduate work. In the Banister lab, Susan worked with Hilary Brown, Anne Clark and Wayne Giles investigating the membrane currents in strips of frog atrial muscle voltage clamped using the double sucrose gap technique. Of particular interest was the induced pacemaking that resulted from applying steady depolarizing currents to atrial muscle. In 1972, Dr Noble was awarded her DPhil for a thesis entitled ‘Membrane currents in frog atrial muscle’.

Following her graduate studies, Dr Susan Noble became a postdoctoral fellow in the Oxford cardiac group, comprising the laboratories of Jean Banister and Denis Noble. She researched potassium ion accumulation in detail, culminating in an important paper as the sole author: ‘Potassium accumulation and depletion in frog atrial muscle’ (Journal of Physiology, 258, 1976).  This was closely followed by a second paper with Wayne Giles (Journal of Physiology, 261, 1976), which demonstrated for the first time the inhibitory action of acetylcholine on the calcium current in atrial muscle. This was the first evidence that the negative inotropic cholinergic action on the heart is attributable to calcium current inhibition. Investigations then shifted to the study of rabbit sinoatrial node preparations. In 1977, she and Hilary Brown published ‘Membrane currents underlying activity in frog sinus venosus’ (Journal of Physiology, 271). In 1979, ‘How does adrenaline accelerate the heart?’ (Nature, 280), co-authored by Hilary Brown, Dario DiFrancesco and Susan Noble, first described the ‘funny current’ in sinoatrial node, an inward current activated at diastolic potentials. This was a revolutionary concept at a time when all pacemaking was thought to arise from the decay of an outward (potassium) current. The discovery of the ‘funny’ (if) current was a milestone in the field of cardiac pacemaking. Many years later, further work on the if channel, especially that in Dario DiFrancesco’s laboratory in Milan, led to the development of ivabradine, a drug used clinically in angina and heart failure therapy, which slows the heart without diminishing the strength of the beat.

Dr Noble was also an accomplished mathematical biologist. In 1984, with Professor Denis Noble, she published the first numerical reconstruction of sinoatrial node electrical activity incorporating the newly described if channel which provided a theoretical validation of the new finding (Proceedings of The Royal Society B, 222). In 1988, she was appointed University Research Lecturer until her retirement in 1999. Following her death in 2015, she leaves a legacy of contributing to findings which have been fundamental to understanding the mechanisms that generate and control cardiac pacemaking.

Read her Obituary: Susan Noble 1940 – 2015 on The Physiological Society website.