© Wellcome Collection / The Medical Mission of Experts on their visit to India.Dame Janet Maria Vaughan DBE FRS came to Oxford to read pre-clinical medicine at Somerville College. Her tutors were Sir Charles Sherrington and J. B. S Haldane of the Laboratory of Physiology, and she gained a First in Physiology in 1922.

Dr Vaughan moved to London for her clinical training at University College Hospital, and during this time developed an interest in blood research while working with patients in 1920s London's slums, where anemia and blood-borne diseases were endemic. Later, as a researcher at Harvard University, she was denied access to both patients and mice for her studies. Instead, she worked with pigeons, doing ground-breaking research on vitamin B12 in the blood. Dr Vaughan became an expert in blood diseases and blood transfusion. Her 1934 book “The Anaemias”, was one of the first on specialised treatments of blood diseases. Throughout the Second World War, Dr Vaughan worked in clinical pathology at the Royal Postgraduate Medical School at Hammersmith Hospital. She soon focused on developing a means to ensure quick access to large quantities of blood. Up until then, blood had been collected on an ad hoc basis and used immediately. She designed a system of blood banks and ran blood supply services for north-west London. Her development of safe and sterile ways to store and transport blood included modified milk bottles and ice cream vans in the early years. She also developed a system for encouraging ongoing blood donation to ensure an ever-ready blood supply. She ultimately became a leader in haematology research and was instrumental in setting up mass blood donation and transfusion. 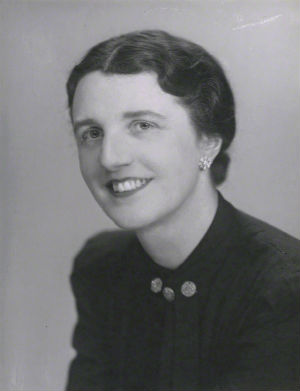 © National Portrait GalleryIn 1945, she went to Belgium to investigate the treatment of starvation, and by the war’s end, she was working in the Bergen-Belsen concentration camp in Germany, where she significantly improved the strategy to feed people suffering from extreme starvation. After the war, her work evolved to study the effects of radiation on the blood, bone and bone marrow. She became a recognised world authority on the effects of plutonium and provided evidence for the International Commission on Radiological Protection. Her books on the subject include “The Physiology of Bone” (1970) and “The Effects of Radiation on the Skeleton” (1973).

From 1945 until her retirement in 1967, while working as a researcher at the Churchill Hospital, she was Principal of Somerville College. She was Principal while Shirley Catlin (later Shirley Williams, Baroness Williams of Crosby) and Margaret Roberts (who would later become the British Prime Minister Margaret Thatcher) studied there. She also served on the Royal Commission on Equal Pay, as a founder trustee of the Nuffield Foundation, and for one year as chairman of the Oxford Regional Hospital Board. When she retired, 40% of Somerville undergraduates were reading science or mathematics, a huge increase from 1945. The total number of fellows at the college had doubled. Dr Vaughan was appointed Dame Commander of the Order of the British Empire (DBE) in the 1957 New Year Honours. The University of Oxford awarded her an honorary DCL in 1967. She was elected a Fellow of the Royal Society (FRS) in 1979.

Obituary for Janet Vaughan from The Independent