Congratulations to the winners of the Michaelmas term poster competition.

On Wednesday 21st October 2015, posters were presented by students at the start of their second year of their D.Phil. studies in the Sherrington Library, to be judged by a panel.

We are delighted to announce the winners of the competition. All three 2nd Year D.Phil. students produced marvelous posters illustrating the scientific progress they have achieved in their first year.

1st Prize was awarded to Ben Kroeger from the Wilson group for his poster entitled: Dissecting the regulation of exosome biogenesis and secretion in Drosophila using super resolution and time-lapse microscopy.

Two prizes were also awarded to the runners up:

Kristie McCormick from the Goberdhan Group for her poster entitled: Characterising the regulation of exosome signalling by mTORC1 in prostate cancer’

Jacqui Stacey from the Butt Group for her poster entitled: GABAergic connections in the neonatal mouse primary visual cortex.

Congratulations to you all. 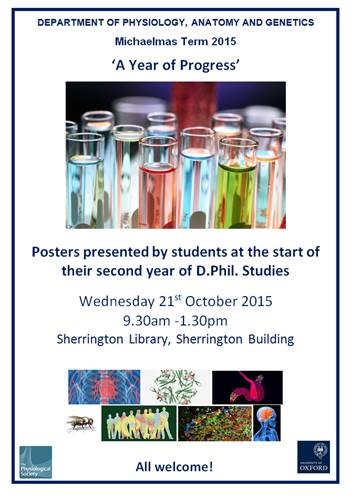