On Wednesday 23 June 2021, the Department hosted the annual Sir Charles Sherrington Prize Lecture in connection with The Physiological Society. This lecture series is dedicated to Sir Charles Sherrington (1857 - 1952), who came to the Department in 1913 as the Waynflete Professor of Physiology. Sherrington received the Nobel Prize in Physiology or Medicine in 1932 with Edgar Adrian for their work on the functions of neurons. Prior to the work of Sherrington and Adrian, it was widely accepted that reflexes occurred as isolated activity within a reflex arc; instead Sherrington and Adrian showed that reflexes require integrated activation and demonstrated reciprocal innervation of muscles, a principle now known as Sherrington's Law.

This year, the delivery of the lecture in his honour is particularly special as it is the first named lecture to be held since the onset of the COVID-19 pandemic. Regrettably, due to ongoing government restrictions, only a limited number of guests could attend in person, but despite some technical difficulties, the lecture was also streamed to a virtual audience.

The Sherrington Lecture 2021 was delivered by DPAG's current Waynflete Professor of Physiology Gero Miesenböck FRS. In addition to the Waynflete Professorship, he is also founding Director of the Centre for Neural Circuits and Behaviour, a member of the Austrian and German Academies of Sciences and a Fellow of the Royal Society. Professor Miesenböck has received numerous international awards for the invention of optogenetics, including the InBev Baillet-Latour International Health Prize (2012), the Brain Prize (2013), the Heinrich Wieland Prize (2015), the BBVA Foundation Frontiers of Knowledge Award (2016), the Massry Prize (2016), the Warren Alpert Foundation Award (2019) and most recently, the Shaw Prize (2020). In 2022, he will deliver The Physiological Society's most prestigious lecture, the Annual Review Prize Lecture, at the Europhysiology conference in Copenhagen. 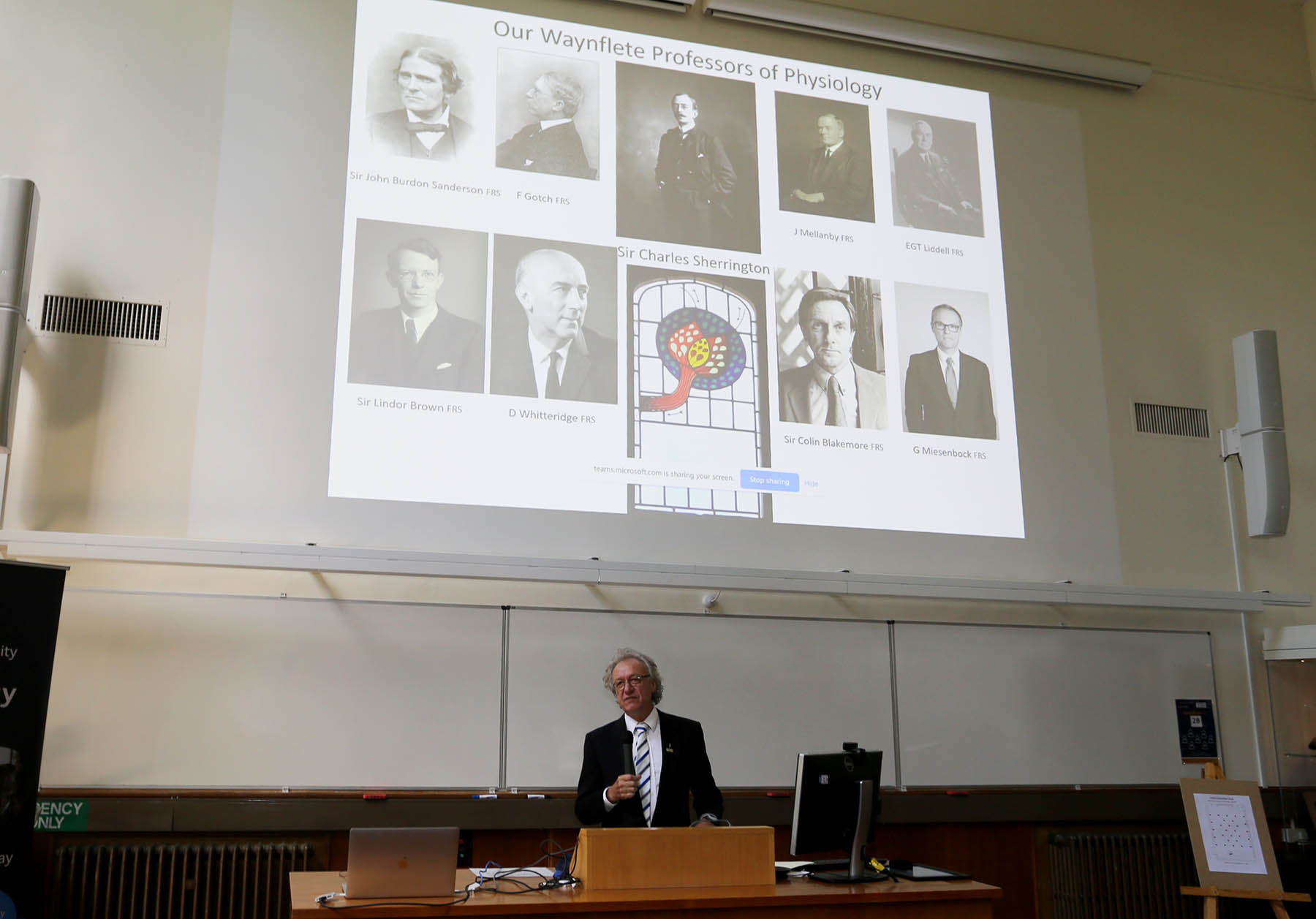 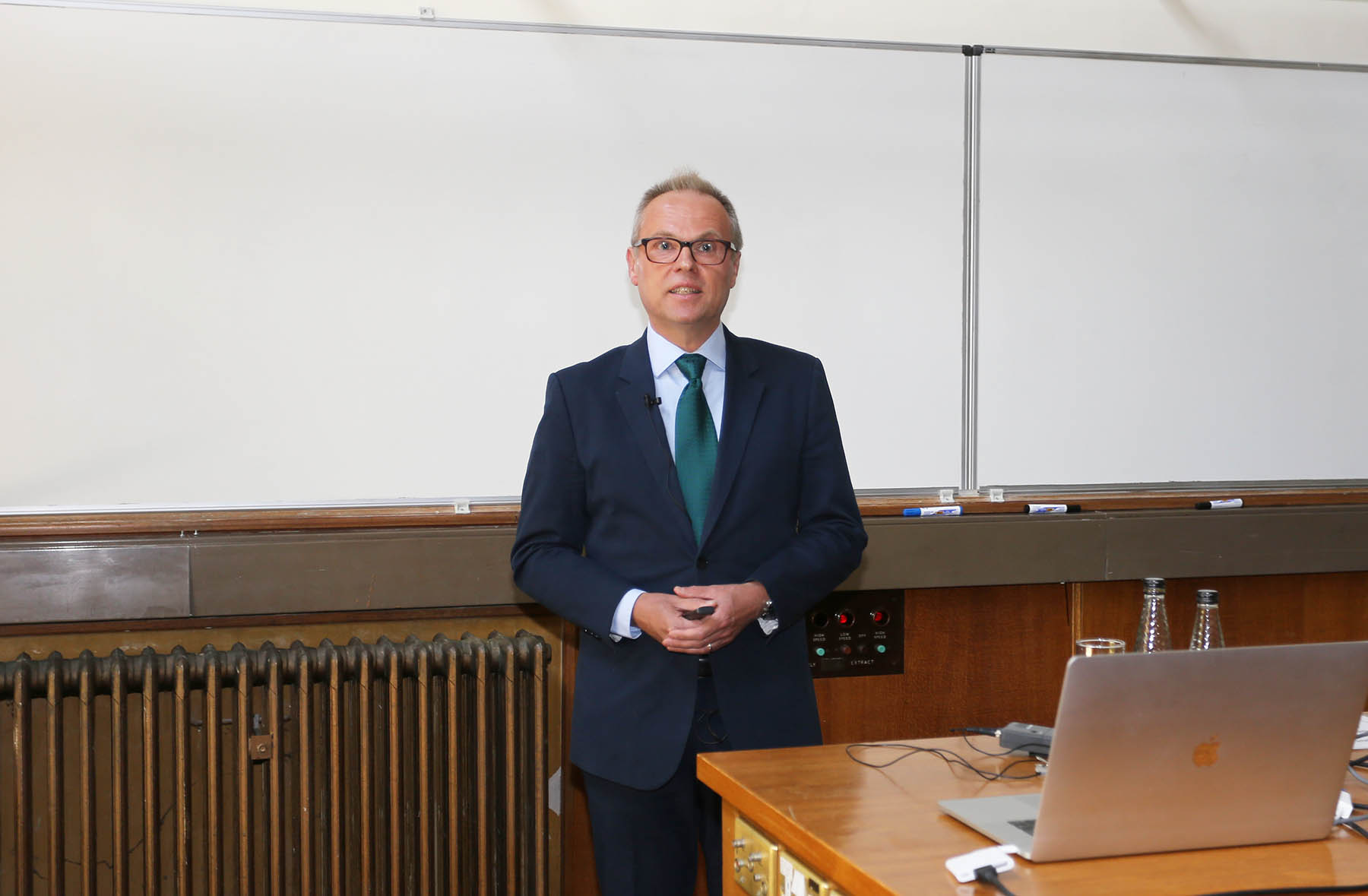 Professor Miesenböck was welcomed to the Lecture and delivered "Lighting Up the Brain" to recount the development of optogenetics and illustrate what is now possible with this widely used technique. Optogenetics uses light to control the activity of nerve cells. It provides a direct means of probing the organisation of neural circuits and of identifying the brain processes underlying perception, action, emotion, and thought. Professor Miesenböck was the first to demonstrate optogenetic control of neural activity and animal behaviour. His foundational studies led to an explosion in optogenetic applications and technical improvements. The field has ultimately transformed neuroscientific research and opened new possibilities for the treatment of brain disorders.

Following the Lecture and presentation of the Sherrington Prize Medal to Professor Miesenböck, lecture attendees gathered outside for the unveiling of The Physiological Society plaque in Sherrington's honour by Sir Colin Blakemore FRS. The Physiological Society’s blue plaques honour outstanding physiologists who have contributed to the advancement of the discipline through their discoveries while leaving a legacy beyond their lifetime. The Sherrington plaque is the first of many that will be erected across UK and Ireland institutions over the coming months.

More information about the Plaque and Sherrington, including archive footage, can be found on The Physiological Society website. Follow updates on this page as further plaques are erected in due course.

The Plaque is ready to unveil outside the Sherrington Building entrance 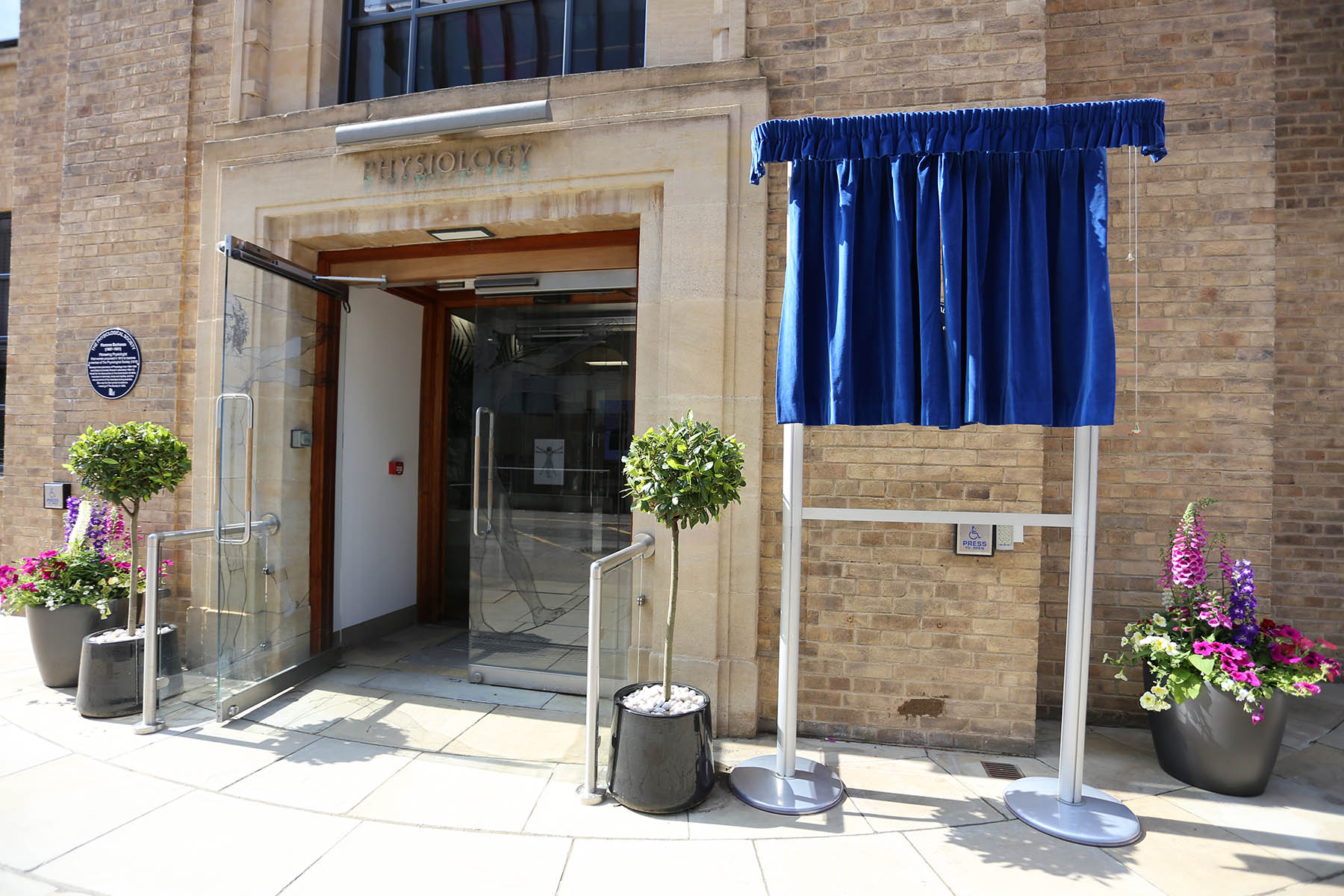 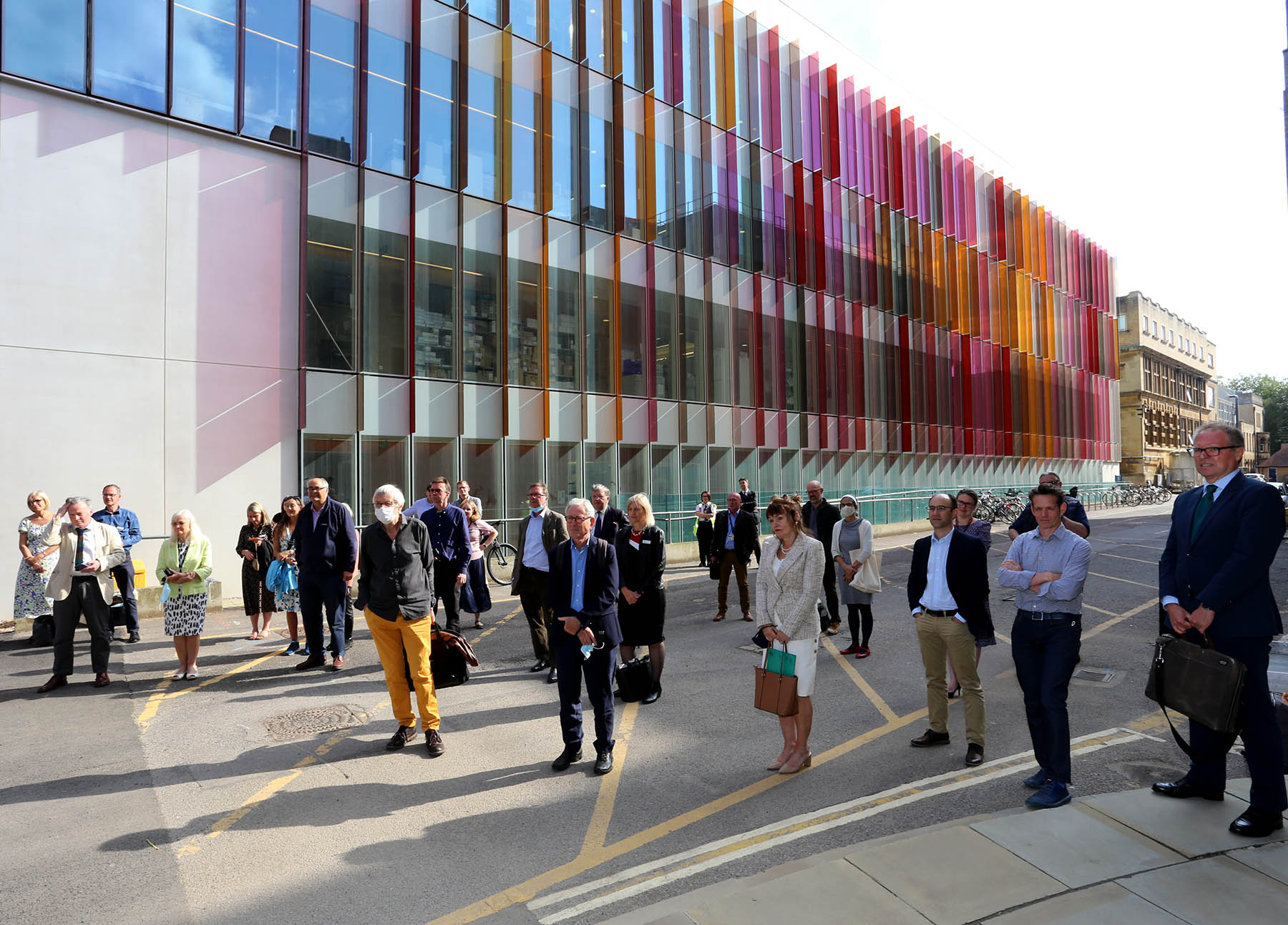 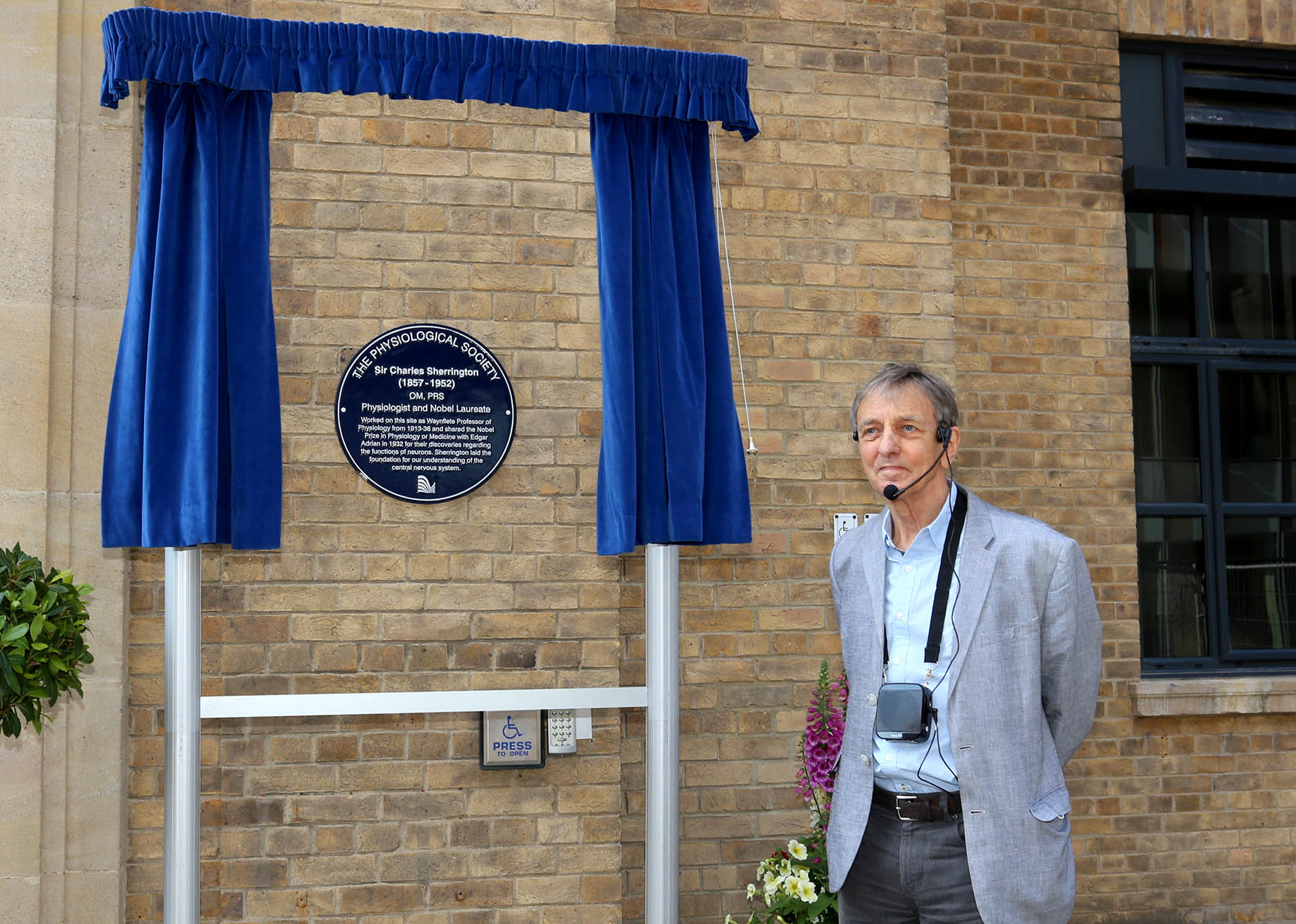 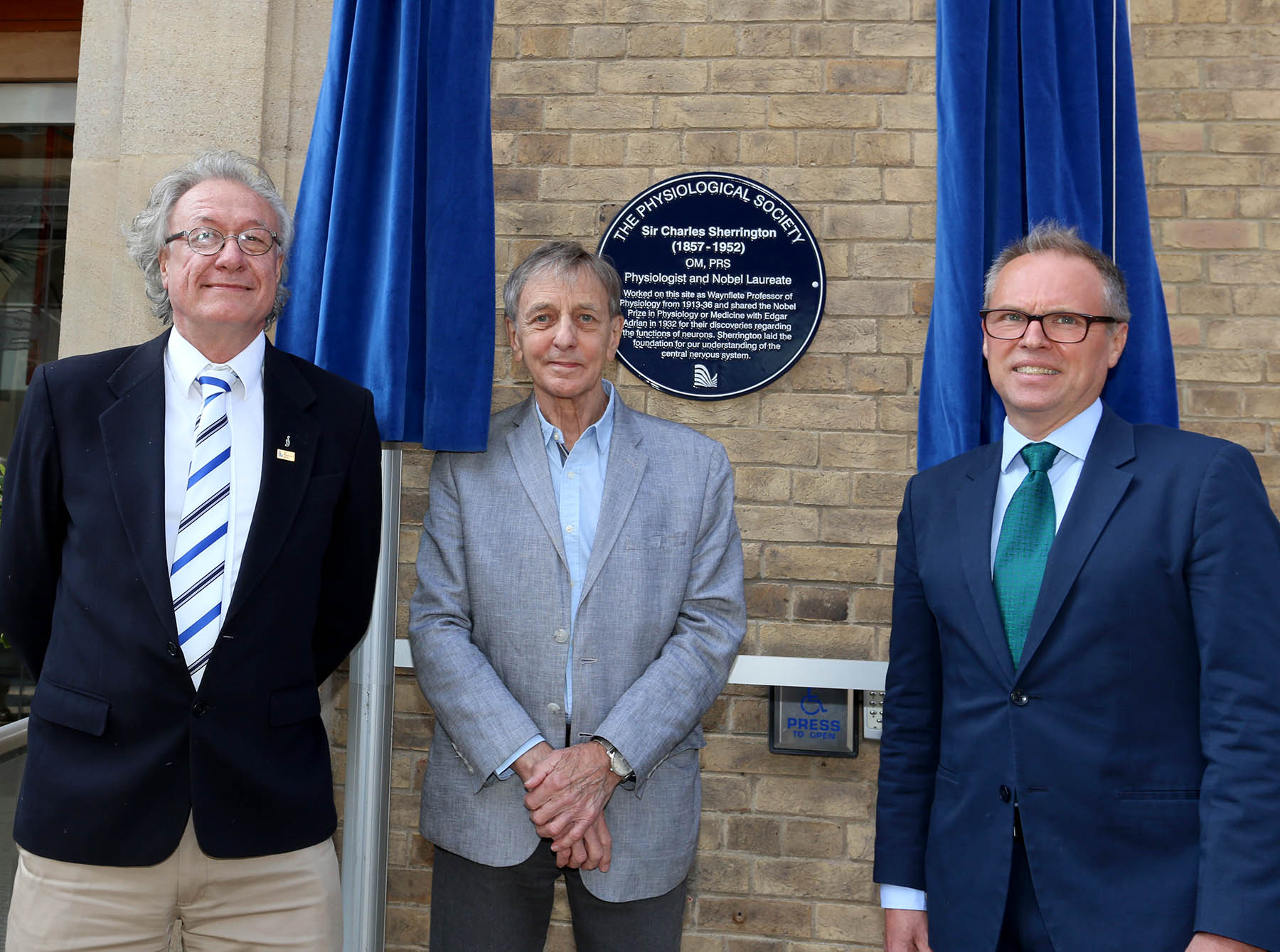 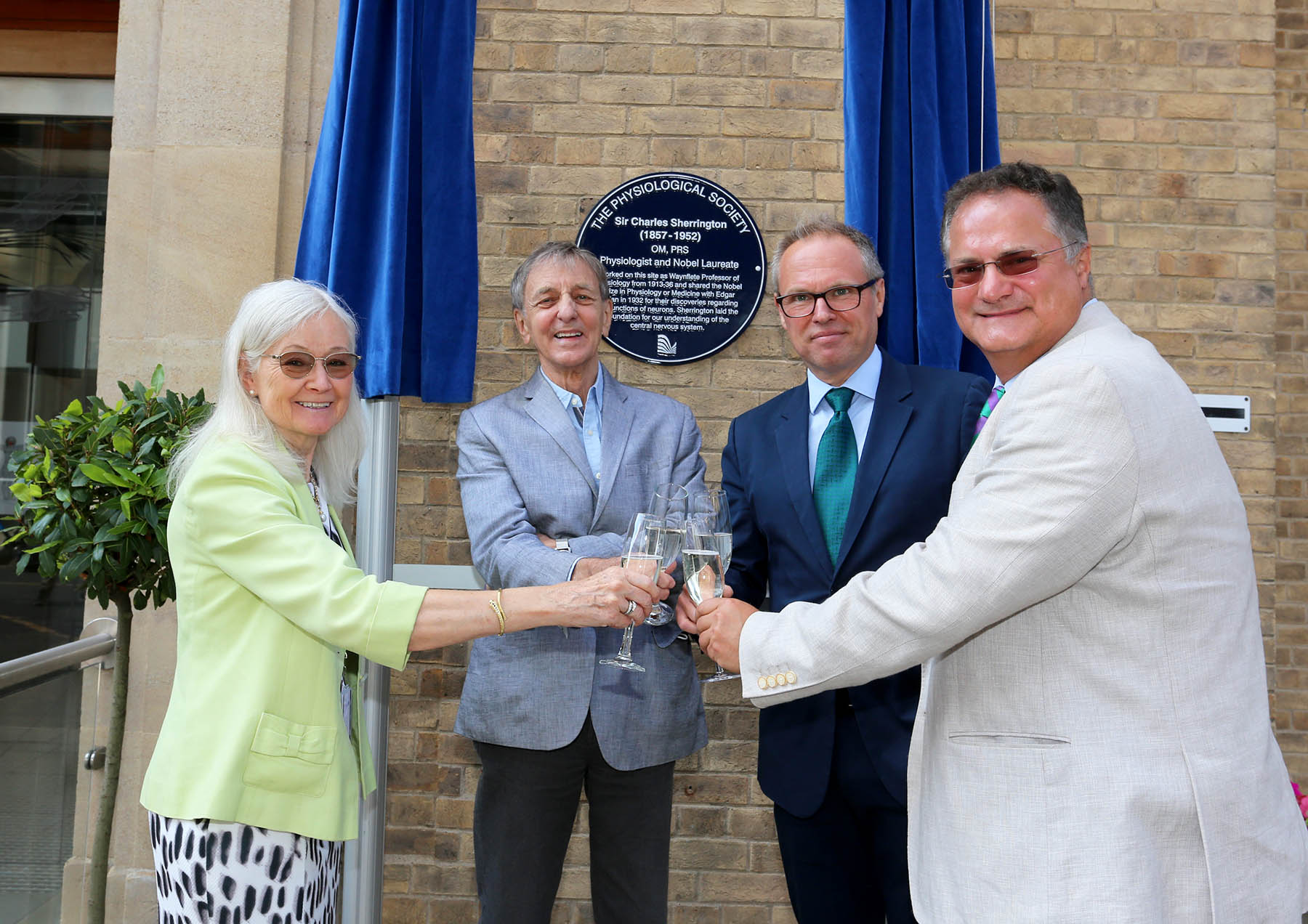 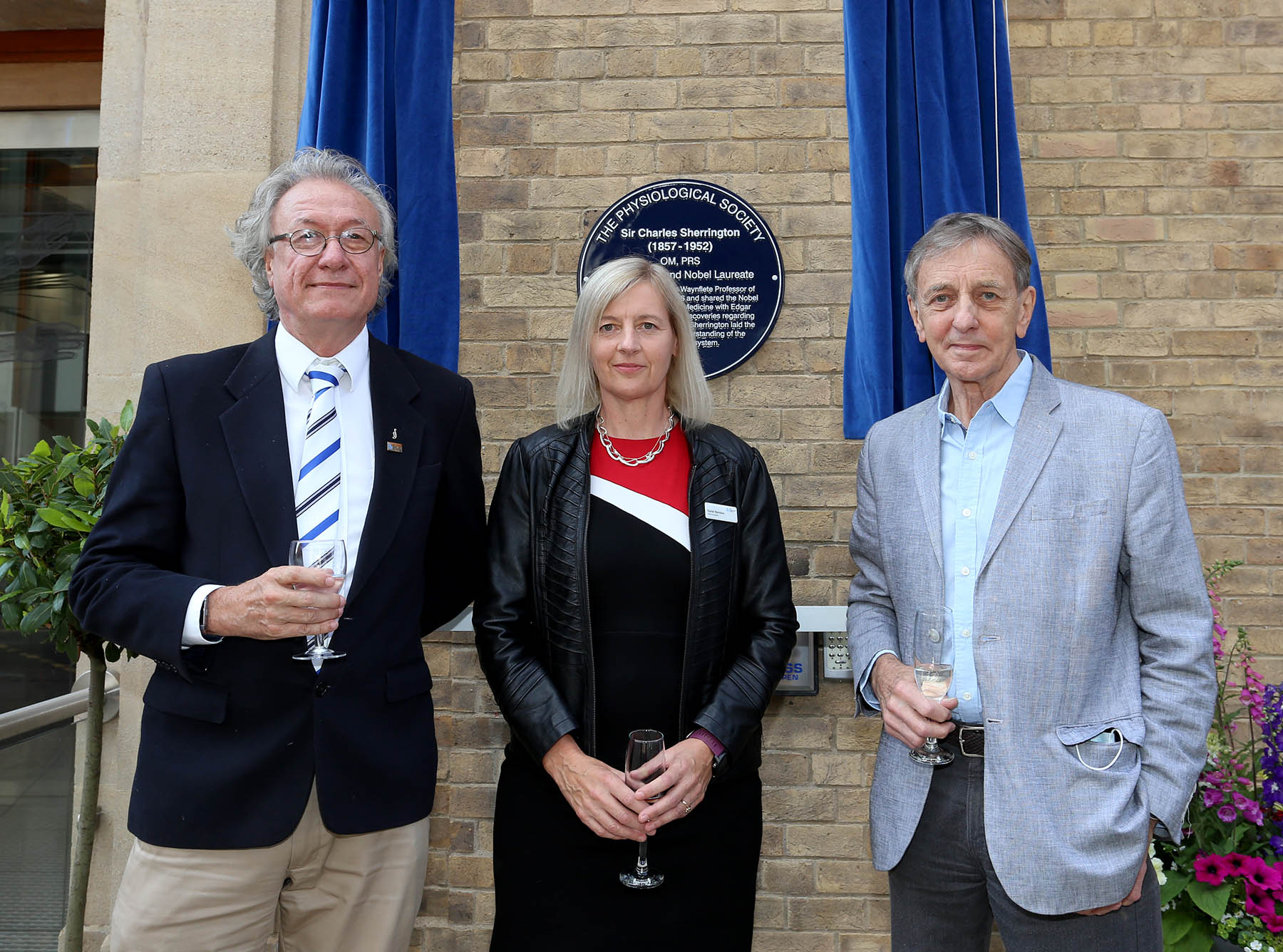 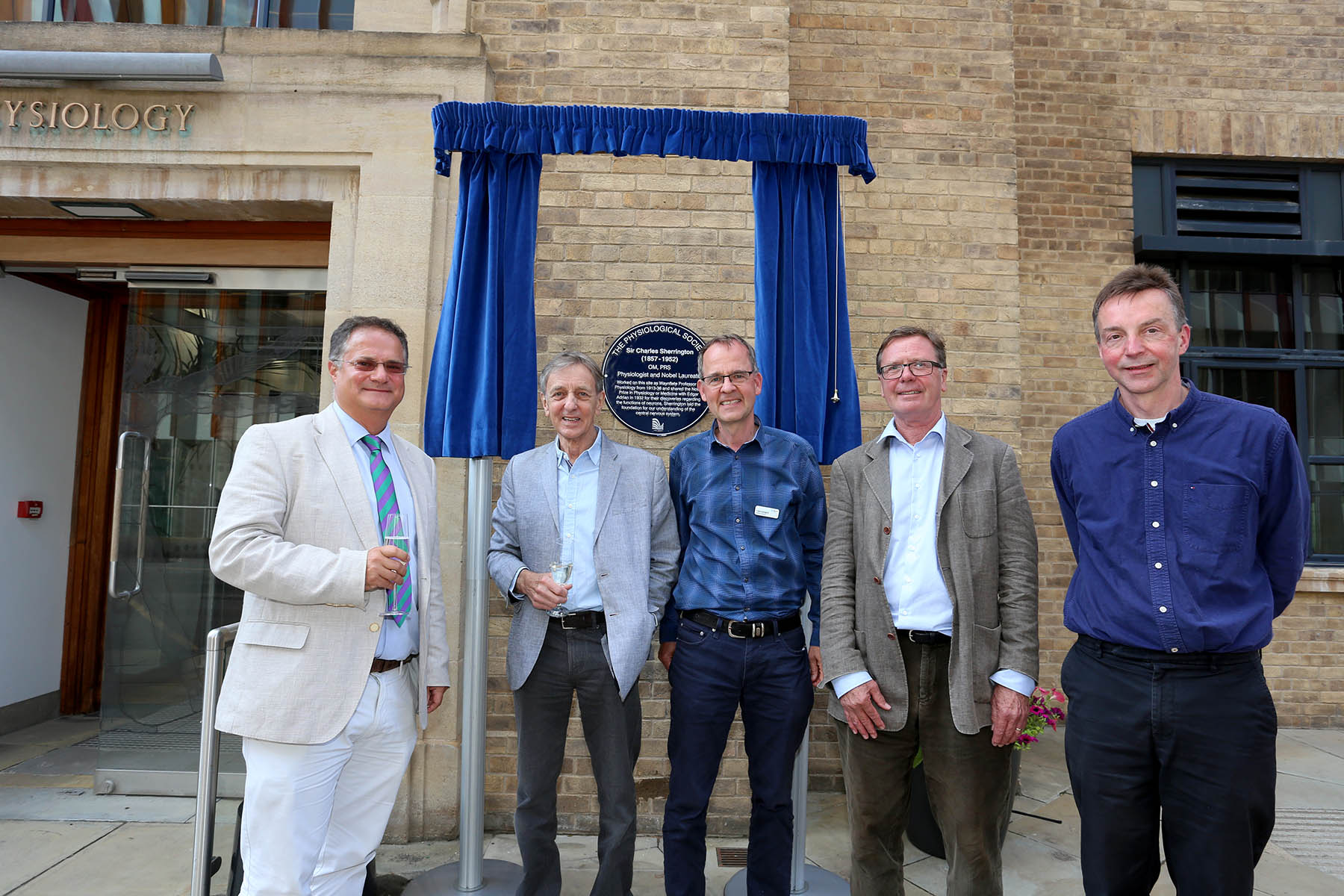 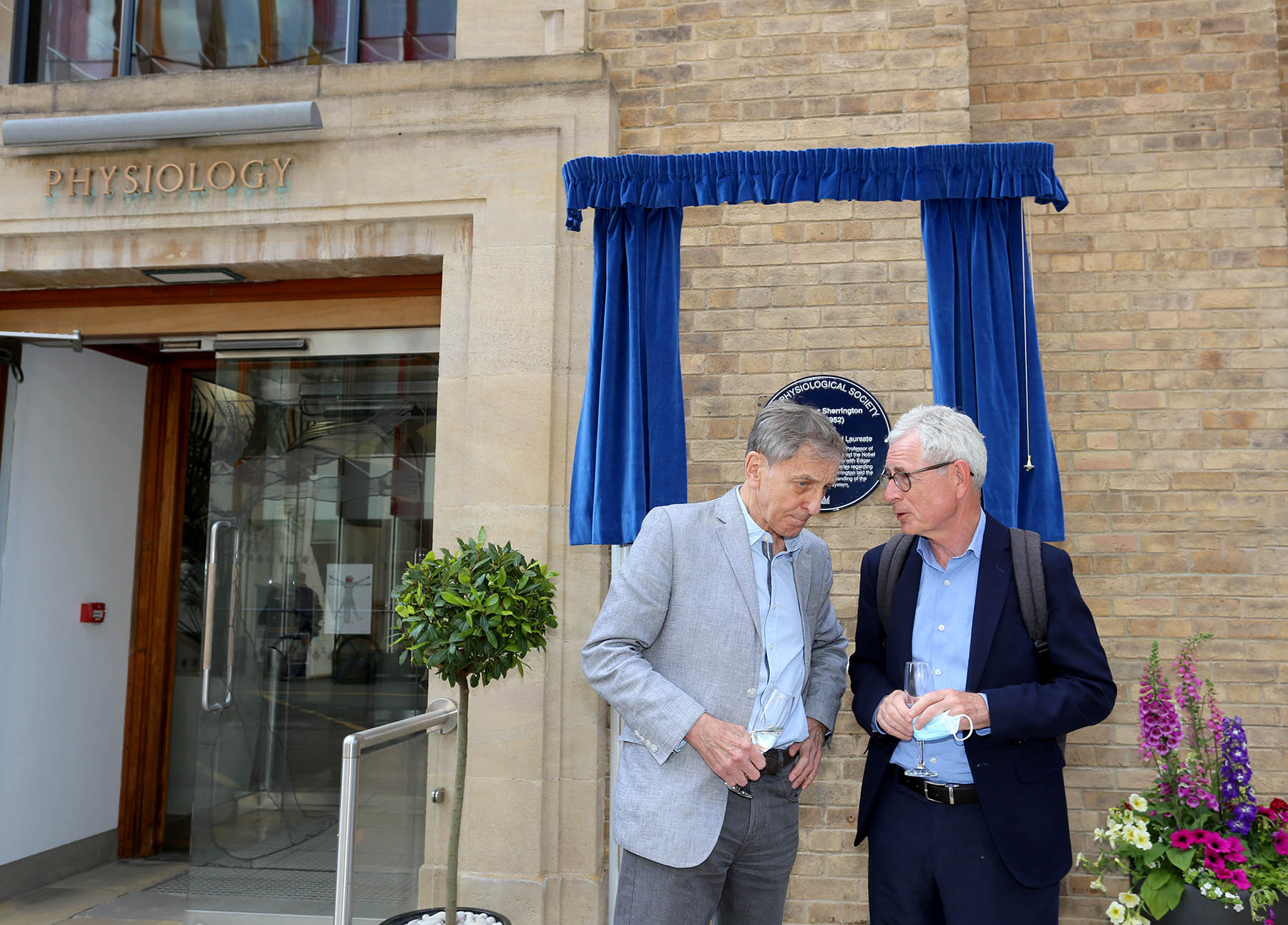 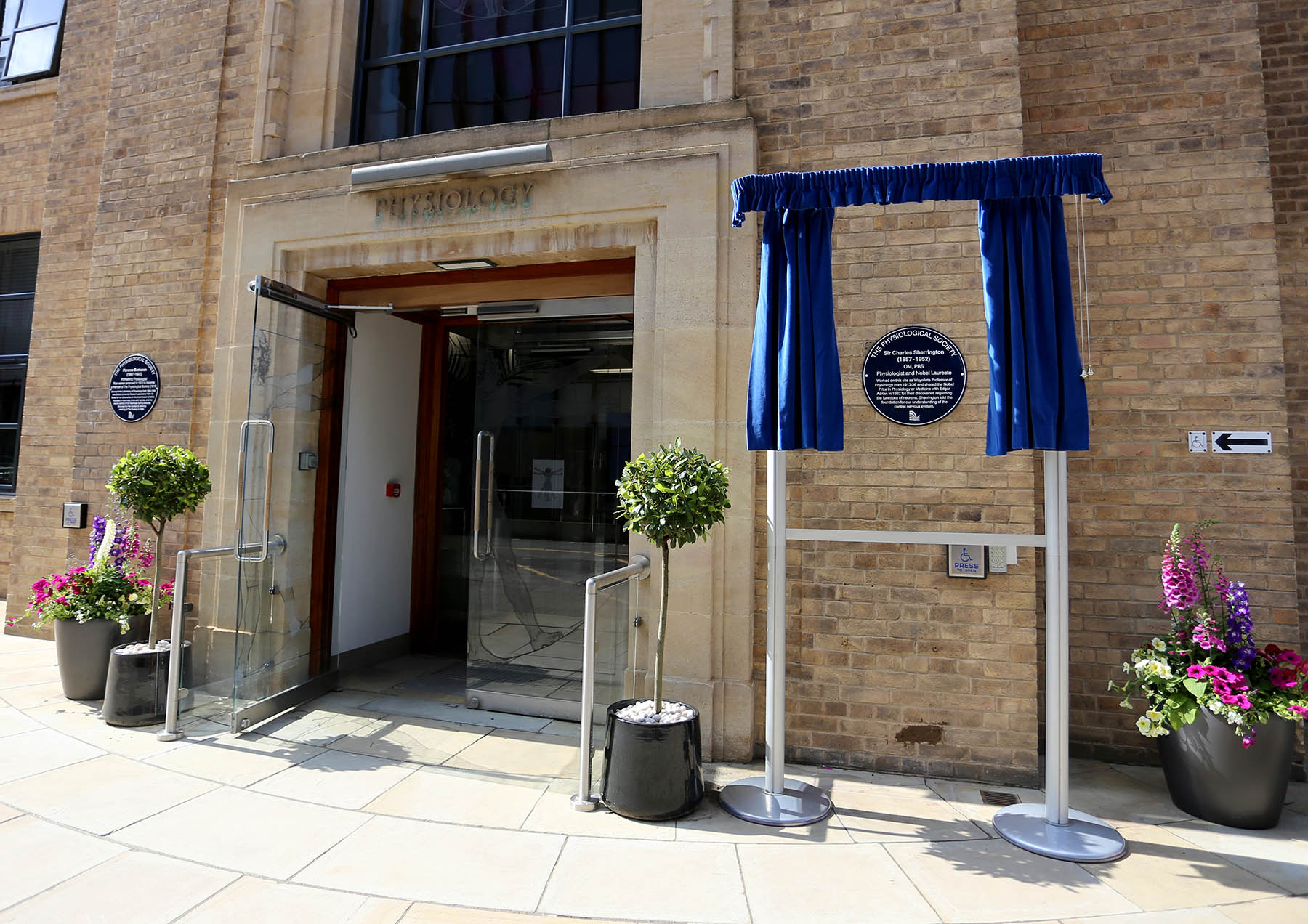