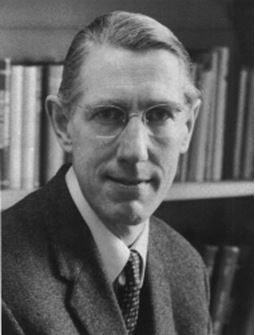 All members of the Department will be sad to hear of the death of Peter Matthews, Emeritus Professor of Sensorimotor Physiology, in the University Laboratory of Physiology and Emeritus Student of Christ Church, Oxford, at the age of 91. His outstanding scientific achievement was unravelling the working of the muscle spindle and writing an influential monograph on the subject. Many members of the Department fondly remember him, not only for the impact of his world leading research, but also for his invaluable academic support and advice, and his dedicated and enthusiastic approach to teaching.

Peter Bryan Conrad Matthews was born in Cambridge in 1928, to prominent physiologist Sir Bryan Harold Cabot Matthews and Rachel Eckhard. Peter first studied Natural Sciences at King’s College, Cambridge, before completing his medical studies at the Clinical School in Oxford.  In 1957, he came to Christ Church, Oxford as a Lecturer and was elected Dr Lee’s Reader in Anatomy in 1958 and Official Student (Fellow). It was during this time that he initiated his lifelong work on muscle receptors and motor control. He received his DM in Clinical Medicine in 1959. From 1961 - 1977, he was appointed University Lecturer at the Laboratory of Physiology.

Through full experimental development of a landmark discovery by Sybil Cooper, Peter demonstrated quantitatively that the primary endings of muscle spindles measure length and rate of lengthening muscle, and the secondary endings measure length only. In order to successfully describe the physiology of muscle spindles, he designed and personally built two essential bits of equipment: a feedback controlled electromagnetic muscle stretcher and a frequency meter that displayed the rapidity of nerve firing graphically on a computer screen. This display enabled him to uncover the existence of two types of fusimotor fibre, dynamic and static, and the different nature of the outputs from primary and secondary endings in the muscle spindle. He also showed that the outputs from muscle spindle secondary endings were needed in addition to that of the primary endings to account for the full strength of the stretch reflex. In 1964, he detailed his findings in Muscle Spindles and Their Motor Control that continues to have wide influence today.

Later with Guy Goodwin and Ian McCloskey, Peter showed that muscle spindles actually affect consciousness, for example, providing us with some of the information needed to know where our limbs are. Peter demonstrated this through a unique vibration illustration both to the University’s medical students and at a Physiological Society meeting, transforming our understanding of how joint angle is sensed. Prior to this discovery, it was generally believed that the output from muscle spindles were inaccessible to our consciousness. His monograph for The Physiological Society, Muscle Receptors and their Central Actions, published in 1972, remains a model of scientific writing and insight.

In 1973, Peter was elected a Fellow of The Royal Society. In 1987 he was appointed Professor of Sensorimotor Physiology, one of the first ad hominem professorships normally reserved for Heads of Departments, in recognition of his pioneering scientific distinction. A post he held until his retirement in 1996.  He remained an enthusiastic honorary member of The Physiological Society for the rest of his life; attending any meeting concerning muscle spindles or spinal reflexes where he could make a vital contribution.

Outside of his research, Peter was renowned for running a Morris Minor and could be found welding in the yard on Sundays. He is also fondly remembered cycling everywhere he went in Oxford while wearing a homemade helmet. He was also known to be an innate recycler, having accumulated a large collection of rescued items converted into practical household goods.

He is survived by his wife Dr Margaret R Matthews, Emeritus Fellow at Lady Margaret Hall, formerly of the Department of Human Anatomy, whom he met while reading Medicine at Oxford, and their two children, Hugh (Reader in Sensory Physiology at Cambridge), and Clare a consultant physician.

Many of my colleagues have written to me and wished to share their memories of Peter and the influence he had on them.

“I first met Peter Matthews at a meeting of the Physiological Society in Oxford. He was doing a ‘Demonstration’ during the meeting, carrying out an experiment on cat muscles spindles. This was a seriously demanding live experiment, carried out on his own. He was perfectly happy to have streams of visitors coming in and out of his lab, and positively fizzed with almost school boy enthusiasm as he explained what he was finding. Later, when I was a postdoc in the Department he was unfailingly kind and supportive and I was a subject for at least one of Peter’s human experiments!” (Stuart Judge, Emeritus Reader)

“He was very kind to me as a new member of the Laboratory and he gave me much appreciated advice on a wide range of academic topics. For my part, in an age of mega-research groups, it was so impressive to read the world-leading papers Peter had produced in his "mini lab" and see his productivity go relatively undiminished with time. He always had time to discuss his data with colleagues like myself who were relatively ignorant of the subtle details and had a great ability to illustrate his superb work in the context of human neurophysiological function. Indeed, he was a great example of how timeless top class research in Physiology is for Medical practice.” (Trevor Powell, Emeritus Professor).

“Peter played a major part in my life when I was an undergraduate, as my postgraduate supervisor, postdoc mentor, working colleague and lifetime friend. He was characterised by his great intelligence, excitability, enthusiasm and a liking for intellectual challenges. His manner was forceful perhaps because he was impatient to get to the point, something that he with his quick mind could do much faster than other people. He was an excellent teacher and many will remember the clarity of his live demonstrations of spinal reflexes for the undergraduates. The medical students at Christ Church were very fond of him. Graduate students in the Lab. were kindly peppered with penetrating questions and suggestions when they gave seminars on the state of their work.

Peter had a talent for finding practical solutions both in the lab and at home. He was also an innate recycler. Many people will remember seeing his tall silhouette with the green Toulouse beret pulled down over his ear (worn to avoid infection; he had fractured his temporal bone at school and leaked CSF from the ear for a time) inspecting the skips outside the Lab for anything worth salvaging as he made his way out to the bike shed. Peter and Margaret’s house on Cumnor Hill accumulated a fine collection of rescued items such as an old oil tank cunningly turned into a garden store and sundry old washing machines kept to provide parts for whatever! He was naturally frugal, always rode a bicycle, kept his cars for long past their sell by date confident he could sort out any problems that arose.

After his retirement, Peter came on his first visit to us in Wester Ross on his bicycle (the same bike he used in Oxford) carrying all he needed in two old side paniers tied on with string and covering long distances across northern Scotland staying in Youth hostels on the way. While here on that occasion he manufactured an extremely effective method for securing our chimney cowl which until then was liable to be blown off in the south westerly gales. Peter was indeed an exceptional person; Hilary and I were privileged to know him”. (Michael Brown, Emeritus Fellow of Trinity College and Emeritus University Lecturer in Physiology, Oxford).

A fellow clinical student of Peter's and long-term friend writes 'We were on a ward round with the Professor of Medicine. There was a patient with a neurological problem, and the Professor turned to Peter and said 'Here, Peter, you report this case, you know more about this than I do,' whereupon Peter did just that! My respect for Peter's knowledge went up, as did my respect for the Professor's honesty and modesty’ (who was probably Prof Witts).

Professor Sir Colin Blakemore FRS (Waynflete Professor (1979-2007; and Head of Department 1979-1995) commented to me that Peter was a tireless supporter of the department and of his students, indeed he was adored and idolized by his students.

As a graduate student in the ULP during Colin’s headship in the 80’s, Peter was in charge of us.  Seminars were always exacting as was afternoon tea in the common room, but the care he showed towards us, and his advice given to me later in life as a young lecturer in the Department will always be valued and cherished.  He played a big part in the history and academic distinction that the Department enjoys.  He will be greatly missed as this is the end of an era.  When the word professor is used with wide licence these days, PBC Mathews FRS will be remembered as the professors’ professor.  In piam memoriam.