The annual lecture is held in dedication to pioneering Physiologist and Scientific Explorer, Mabel FitzGerald, in whose honour the Department recently erected The Physiological Society blue plaque outside the Cardiac Science Centre.

On Friday 3 December, as part of the termly Head of Department Seminar Series, the Department hosted the 2021 Mabel FitzGerald Prize Lecture.

This year's Lecture, entitled "Designing materials to heal the body and detect diseases earlier", was given by Molly Stevens, FREng FRS,  Professor of Biomedical Materials and Regenerative Medicine in the Department of Materials and the Department of Bioengineering, and the Research Director for Biomedical Material Sciences at the Institute of Biomedical Engineering, at Imperial College London. Her promotion to Professor in 2008 made her one of the youngest Professors ever in the history of the institution. 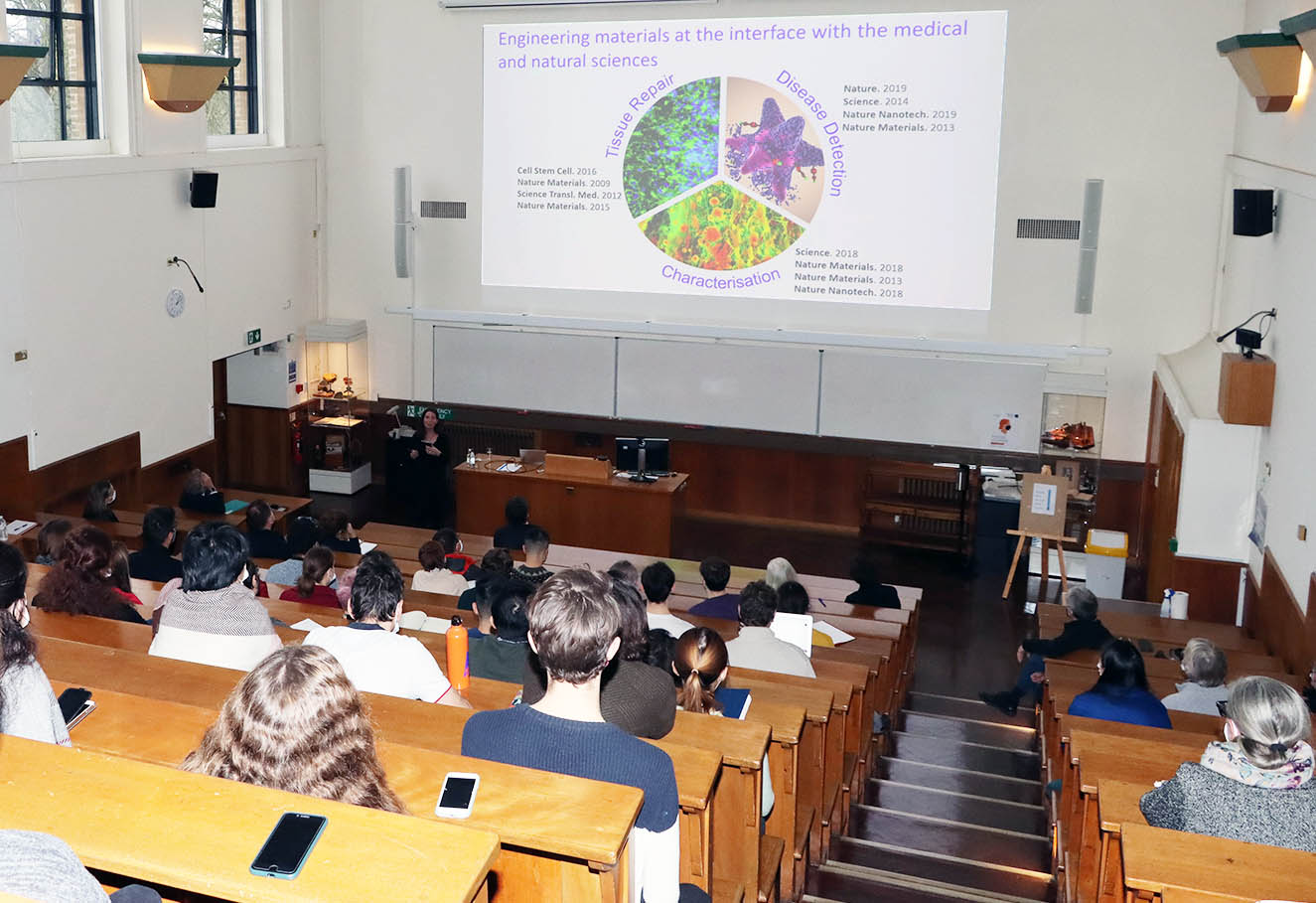 Professor Stevens’ multidisciplinary research balances the investigation of fundamental science with the development of technology to address some of the major healthcare challenges. Her work has been instrumental in elucidating the bio-material interfaces. She has contributed a broad portfolio of biomaterials for applications in disease diagnostics and regenerative medicine. She holds numerous leadership positions including Director of the UK Regenerative Medicine Platform “Smart Materials” Hub, Deputy Director of the EPSRC funded Interdisciplinary Research Centre in Early-Warning Sensing Systems for Infectious Diseases, and Associate Director of the British Heart Foundation Centre of Research Excellence, amongst many other roles.

Professor Stevens has been the recipient of over 30 prestigious awards, including the Acta Biomaterialia Silver Medal (2020), Surfaces and Interfaces Award (Royal Society of Chemistry, 2019), Rosalind Franklin Medal and Prize (Institute of Physics, 2018) and the Harrison Medal (Royal Pharmaceutical Society, 2017). 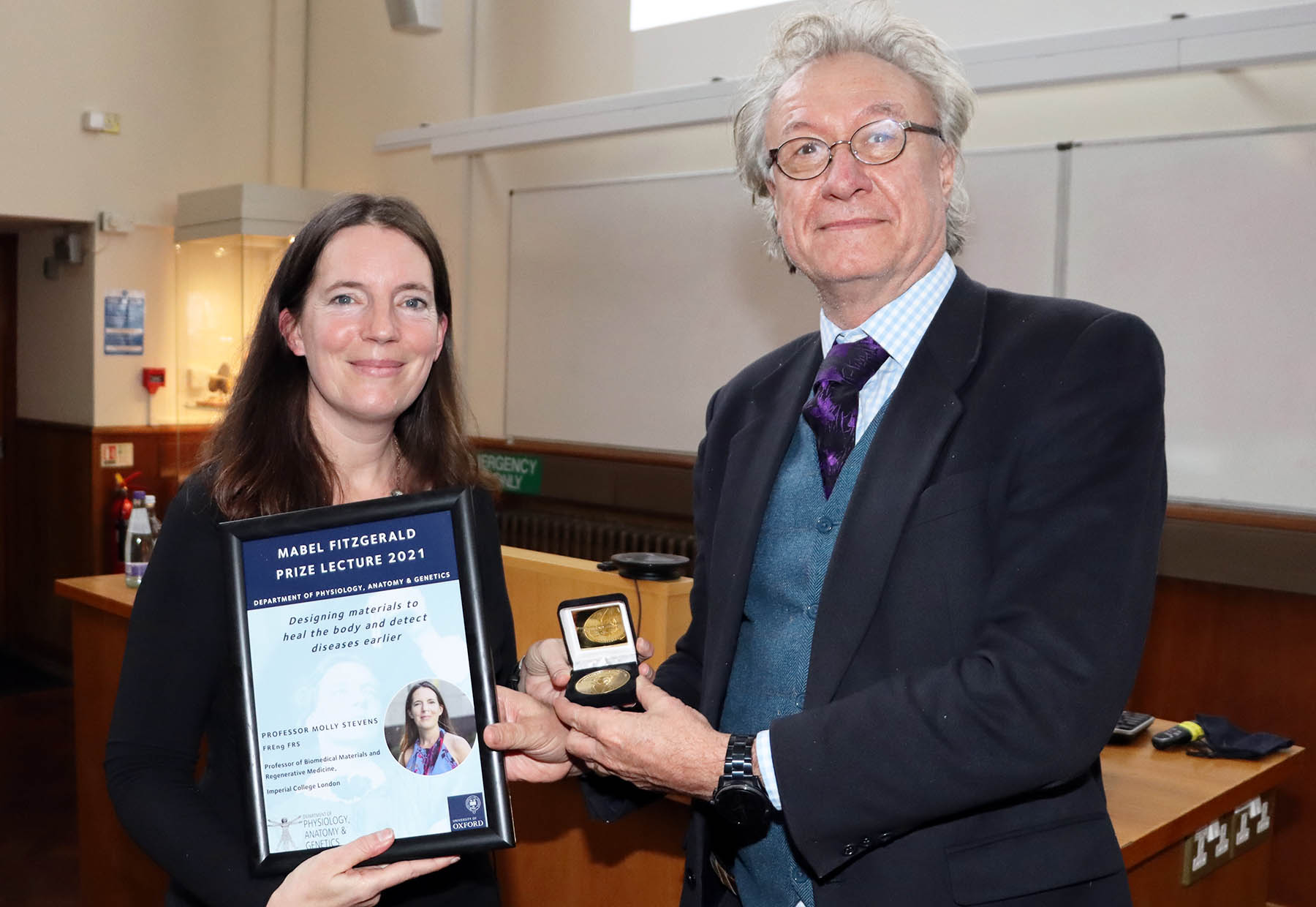 Mabel FitzGerald, the first woman to join the medical school at the University of Oxford, took part in the Laboratory of Physiology's landmark medical expedition to Pike’s Peak, Colorado, USA, led by Haldane and C. G Douglas in 1911 to examine the effects of low atmospheric pressure on respiration. She was the only woman in a team whose discoveries revolutionised current ideas about respiration.

From there, FitzGerald took a solo trip making detailed physiological measurements of the populations living at different altitudes throughout the state, and perhaps her greatest scientific accomplishment was to demonstrate, over the long term, that it is oxygen, and not carbon dioxide, that determines how hard we breathe and sets the haemoglobin concentration in our blood. Despite this incredible work, FitzGerald was all but forgotten in the study of human acclimatisation to high altitude for many years, until she was finally bestowed an honorary degree in 1972 - the first centenarian to receive one.

The lecture was followed by a reception in the Sherrington Library, where lecture attendees met with Professor Stevens over tea, coffee and cake.

Read more about Mabel FitzGerald on the Women in Physiology, Anatomy and Genetics website.