Frances Ashcroft awarded Honorary Doctorate by the University of Lund

Professor Dame Frances Ashcroft has been awarded an Honorary Doctorate by the University of Lund in recognition of her research into neonatal diabetes.

On 2nd June 2017 Frances Ashcroft attended the award ceremony at the University of Lund where, as part of the proceedings, a canon was fired marking the exact moment when the top hat was placed upon her head! 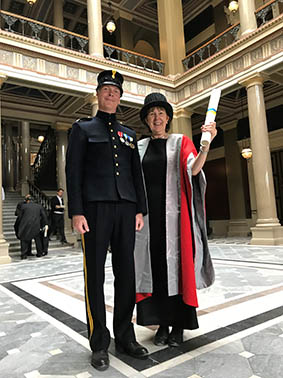 Professor Dame Frances Ashcroft, FMedSci, FRS, pictured here after the ceremony, with the top hat and scroll awarded her by the University of Lund. The man on the left is the bombadier, who
fired the cannon.

The above is a photo of all the doctorates including the PhD students, the honorary doctors and the jubilee doctors (who are awarded a jubilee doctorate this 50 years after their PhD). The young girls in the front are the wreath carriers, who represent the nine muses and carry the wreaths for the doctors in the faculty of philosophy. Professor Dame Frances Ashcroft is in the red and silver in the front left.

Professor Dame Ashcroft's research focuses on ion channels and their role in insulin secretion in health and disease. Further information, including quotes from Fran on her research and early career, can be found in the University of Lund's University Diabetes Centre press release, which is available here.

Our congratulations to Fran on this honour.

Zoltán Molnár honoured by the Royal Society of Biology

Congratulations are in order to Professor Zoltán Molnár on being elected Fellow of the Royal Society of Biology.

Congratulations are in order to Professor Vladyslav Vyazovskiy on his appointment as Vice President (Basic) of the European Sleep Research Society (ESRS).

In the 2022 Christmas Lectures from the Royal Institution, DPAG's Visiting Professor of Forensic Anatomy Dame Sue Black will share secrets of forensic science.

Congratulations are in order for DPhil student Kaitlyn Dennis, who has been awarded the William C Stanley Early Investigator Award. The award highlights the scientific accomplishments of promising young researchers and is a major focus of the Annual Meeting of the Society for Heart and Vascular Metabolism.

Professor Zoltán Molnár delivers the first Keynote Lecture at the 116th Annual Meeting of the Anatomische Gesellschaft, which this year is held as a Joint Meeting with the Anatomical Society for the first time.