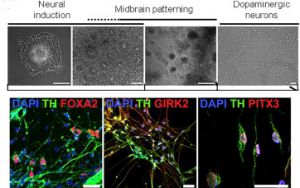 The inaccessibility of functional human dopamine neurons from Parkinson’s disease patients is a major limitation for research in this field. To overcome this, we made use of a recently developed technology (induced pluripotent stem cells - iPSCs) that allows the generation of dopamine neurons from patient skin cells.

Mutations in the GBA gene are one of the most common genetic risk factors for Parkinson’s disease, yet the molecular mechanisms underlying this association are poorly understood. In this study we generated dopamine neurons from multiple patients carrying GBA mutations, which were compared to neurons derived from control individuals. We found that patient neurons had altered levels of several proteins involved in important cell clearance and cell stress mechanisms, which might be relevant for Parkinson’s disease.

Overall, these neurons grown in a dish offer a unique insight into the early dysfunction in Parkinson’s, and might offer new possibilities for therapeutic screens.