The annual lecture is held in honour of one of the great physiologists of the last century, Marianne Fillenz. Fillenz was a devoted and much loved University Demonstrator in the Laboratory of Physiology and her lab was positioned at the forefront of the application of measuring chemicals that could be detected directly at the electrode.

In connection with the Athena Swan charter, on Thursday 5 March 2020, the Department hosted the annual Marianne Fillenz Memorial Lecture.

This year's Lecture, entitled Dynamic control of presynaptic function in health and disease, was given by one of our former Physiology students, Prof. Dr. Nils Brose, now Professor and Director of the Department of Molecular Neurobiology at the Max Planck Institute for Experimental Medicine, Göttingen, Germany, hosted by Head of Department Professor David Paterson. 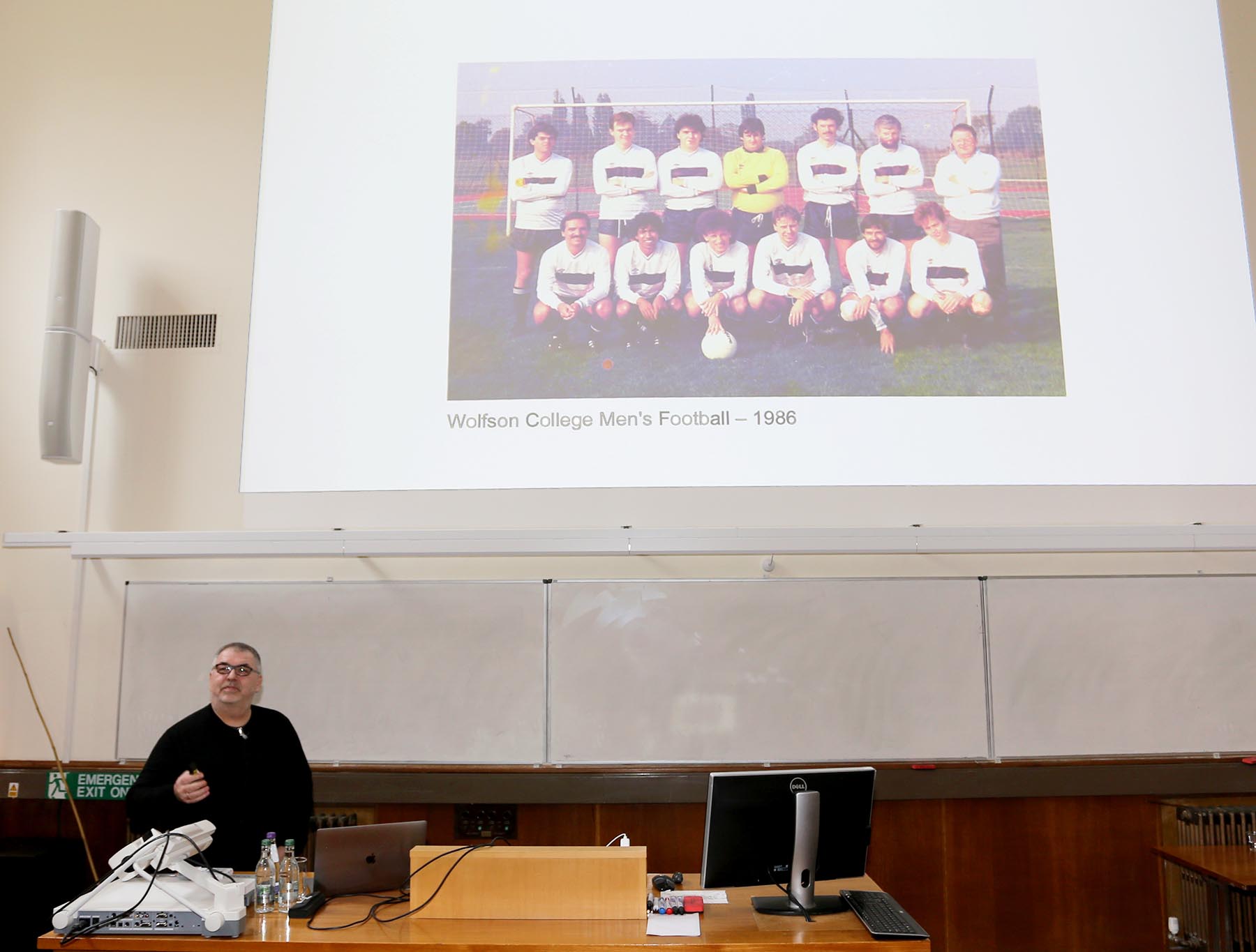 Prof. Dr. Nils Brose with an illustration of his time as a student at Oxford

Nils Brose studied Physiology at Oxford in the lab of Marianne Fillenz, receiving his MSc in 1987. He went onto receive his doctorate in Biology from Ludwig Maximilians University Munich in 1990, before becoming a postdoctoral fellow at the Salk Institute in San Diego and University of Texas Southwestern Medical Center in Dallas. Between 1995 and 2001, he was a Heisenberg Fellow at the Max Planck Institute of Experimental Medicine before becoming the Director and Scientific Member at the Institute since 2001. He has also been Adjunct Professor at Göttingen University since 2002. 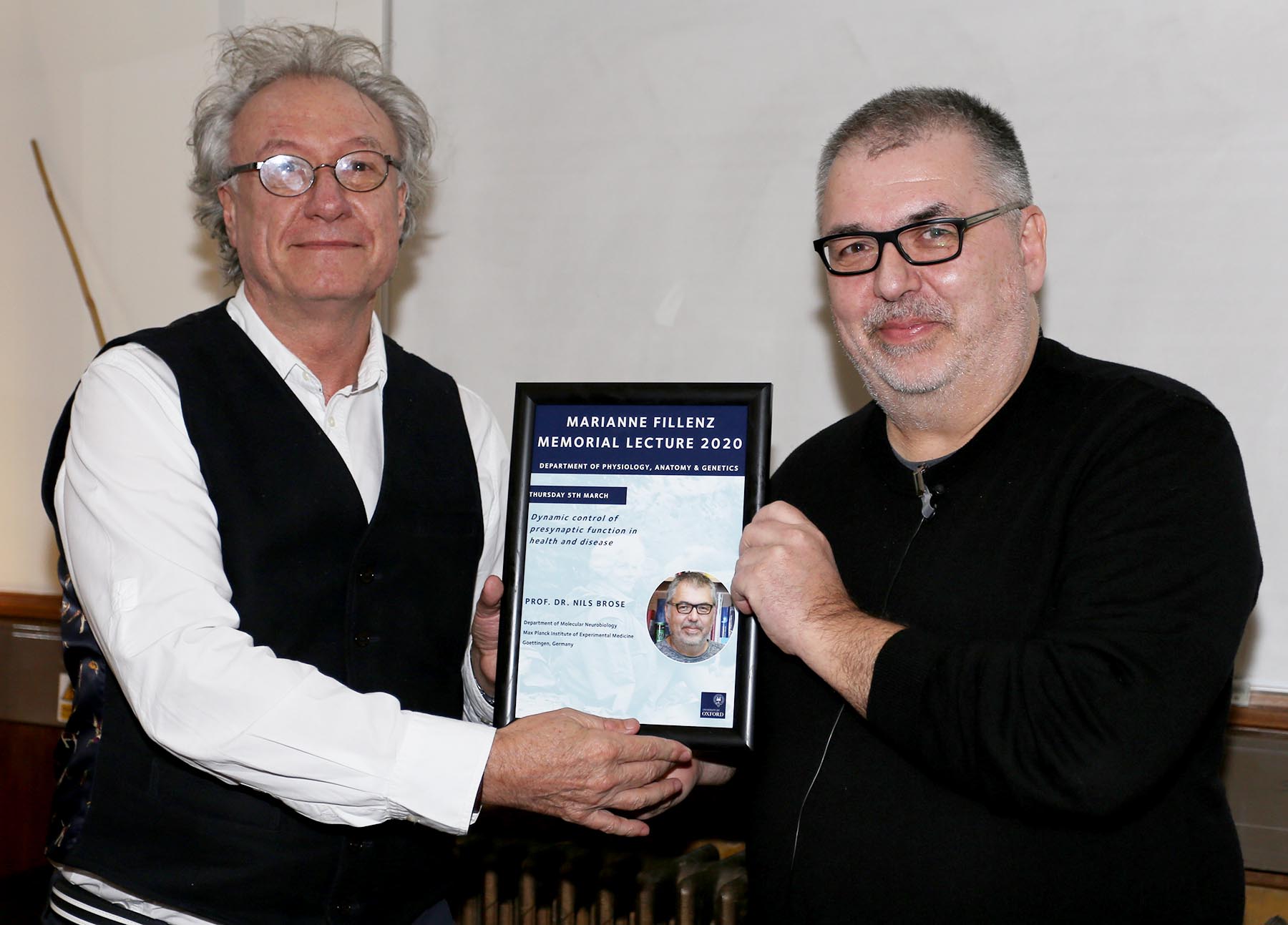 Marianne Fillenz moved to Oxford in 1950 to undertake a DPhil in the Laboratory of Physiology with Sybil Cooper and David Whitteridge, and remained in Oxford for the rest of her life. She studied receptors responding to stretch of the eye muscles and her work showed clearly that an eye muscle length signal is indeed supplied to the brain in the cat, a fact later confirmed in humans. This is demonstrated in her classic 1955 Journal of Physiology paper Responses in the brainstem of the cat to stretch of extrinsic ocular muscles.

After her DPhil, Marianne spent nine years as a College Lecturer at St Hilda’s and as a University Demonstrator in the Laboratory of Physiology, alongside leading independent research in a large suite of labs in the Sherrington Building. While her work across the 1950s was mainly devoted to motor physiology and eye muscles, years later her research interests evolved to focus on the anatomy and physiology of the autonomic nervous system, and she became the local expert on the subject. Marianne was one of the first people to use and develop the technique of voltammetry (electrochemical scanning of transmitters that transport signals from one neuron to another) to measure catecholamine release deep in the brain. Her landmark paper on this subject, published in Neuroscience in 1982, is entitled Linear sweep voltammetry with carbon paste electrodes in the rat striatum. Her technique of linear sweep voltammetry to measure dopamine release in the rat striatum in still much in use today. She went onto work closely with John Albery FRS, a Distinguished Chemist at Oxford, to develop voltammetry electrodes for conveniently measuring many other substances, such as glucose, alcohol, amino acids, oxygen, CO2 and N2O.

In 1963, Fillenz won a Tutorial Fellowship at St Anne’s College, remaining a loyal member of St Anne’s for the rest of her life. She was a devoted and much loved teacher, and numerous former students, alongside colleagues, friends and family members contributed to a Book of Recollections: Marianne Fillenz 5th October 1924 - 15th December 2012 from St Anne's College. Dr Brose was very impressed by Fillenz during his time at Oxford as a young MSc student, and contributed himself to the book: "She gave me freedom to develop my skills but at the same time was very insistent in teaching me what she regarded to be important, e.g. produce reliable data before showing them around on posters at meetings or investing all my energy into writing papers properly. I remember that my first paper draft must have gone through 15 or so versions before submission, which was a learning experience that I have benefited from ever since."

On her retirement from her University Lectureship in September 1992, she received the title of Senior Research Fellow in recognition of her ongoing work. In 1999, she applied for a Doctor of Science based on her research output, and this was awarded by the Board of the Faculty of Physiological Sciences in June 2000.

Special thanks to Colin Beesley for the photographs taken at the lecture.