One high altitude explorer acknowledges another

The new plaque she unveiled this week is part of an ongoing project by The Physiological Society to erect blue plaques across the United Kingdom and Ireland celebrating and recognising institutions where distinguished physiologists have made significant contributions to the discipline. The Society's plaques ultimately honour outstanding physiologists who have contributed to the advancement of physiology through their discoveries while leaving a legacy beyond their lifetime.

Mabel FitzGerald, the first woman to join the medical school at the University of Oxford, took part in the Laboratory of Physiology's landmark medical expedition to Pike’s Peak, Colorado, USA, led by Haldane and C. G Douglas in 1911 to examine the effects of low atmospheric pressure on respiration. She was the only woman in a team whose discoveries revolutionised current ideas about respiration.

From there, FitzGerald took a solo trip making detailed physiological measurements of the populations living at different altitudes throughout the state, and perhaps her greatest scientific accomplishment was to demonstrate, over the long term, that it is oxygen, and not carbon dioxide, that determines how hard we breathe and sets the haemoglobin concentration in our blood. Despite this incredible work, FitzGerald was all but forgotten in the study of human acclimatisation to high altitude for many years, until she was finally bestowed an honorary degree in 1972 - the first centenarian to receive one.

Head of Department and President of The Physiological Society Professor David Paterson said: "It’s an absolute tremendous pleasure to be here today to see this unveiling. This is a big day for The Physiological Society, for Oxford and this Department. It's also terrific that we have a real superstar to share in this opportunity. We're acknowledging the tremendous contribution and discovery that has taken place in our society. But, it's about more than great discovery in physiology. It’s also about acknowledging the tremendous work that our female physiologists have done, which has, until now, gone unrecognised."

The research careers of unveiler Dr Meir and FitzGerald share extraordinary similarities. Before becoming an astronaut, Dr Meir began her career path by studying the physiology of animals in extreme environments. As part of her PhD research, she studied the diving physiology of marine mammals and birds, focusing on oxygen depletion in diving emperor penguins in Antarctica and elephant seals in Northern California. She also researched the physiology of animals, specifically penguins, seals and birds in another extreme environment, high altitude. For her postdoctoral research, she investigated the high-flying bar-headed goose, training geese to fly in a wind tunnel while obtaining various physiological measurements in reduced oxygen conditions. As an astronaut, studies in space, in which she was herself the subject, have examined how a microgravity environment experienced during spaceflight affect the human body.

Ahead of the unveiling, Dr Meir said: “I’m very fortunate that I just felt like I was doing my job that day on the space station. And everybody on the space station was equally trained and had the same opportunities. But the only reason why we have those same opportunities now is because of giants like Mabel FitzGerald. It’s so nice to be here today celebrating one of these giants.”

Watch the video below to watch highlights from the event, including more background from Professor Paterson on the legacy of Mabel FitzGerald, and the full speech from Dr Meir ahead of the unveiling itself.

The unveiling was followed by two lectures delivered to DPAG members and their families and second year medical students on Tuesday 16th and Wednesday 17th November respectively. Read more about the lectures at "Dr Jessica Meir inspires the next generation of scientists and explorers".

On Wednesday 17th November morning, Dr Meir was interviewed by BBC Radio Oxford about her career, including her time on the space station, and her visit to unveil the Mabel FitzGerald blue plaque. You can listen back on BBC Sounds until 17th December 2021 (interview commences 17 minutes 25 seconds in).

PHOTOGRAPHS OF THE UNVEILING and vip guests 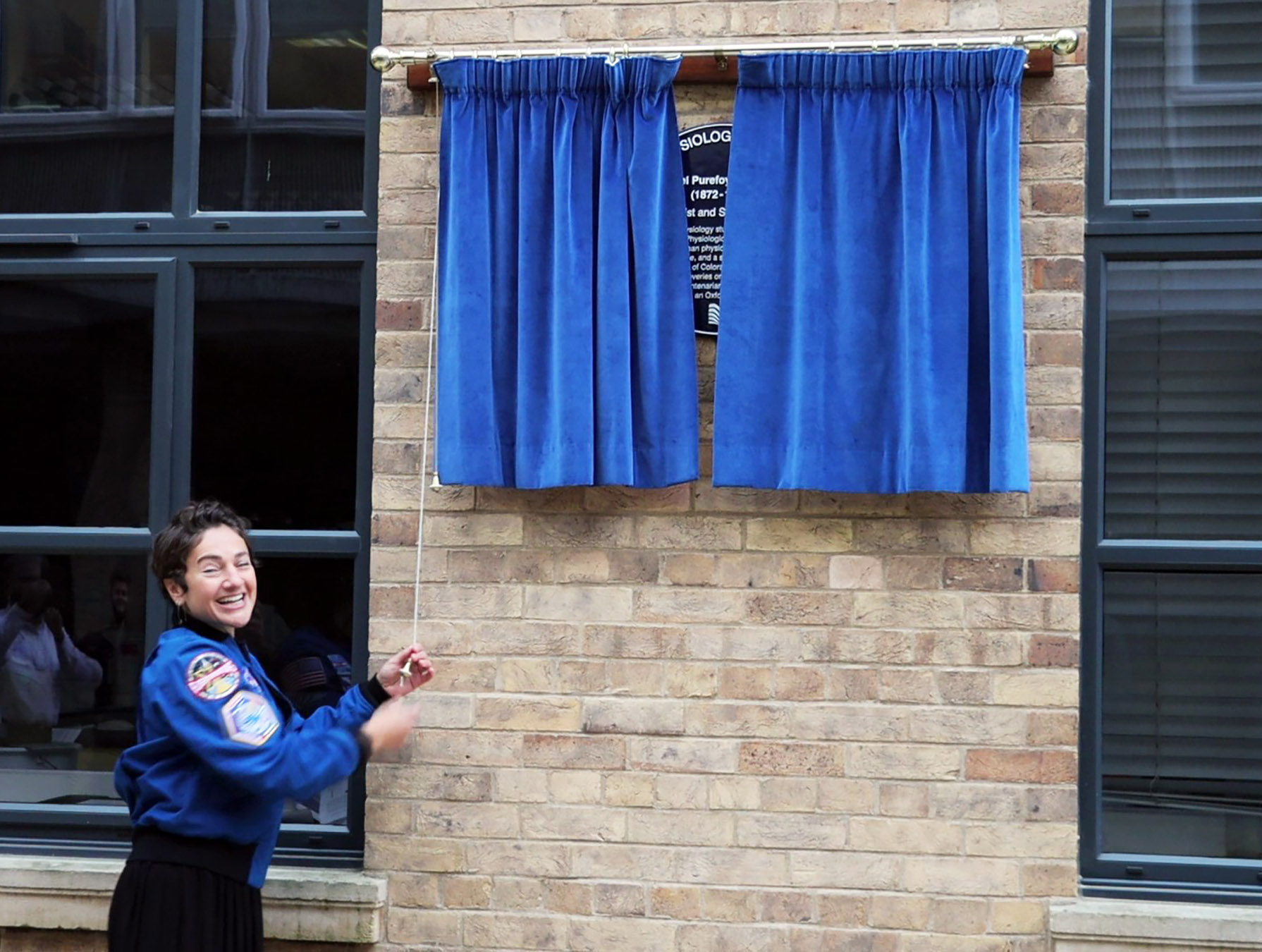 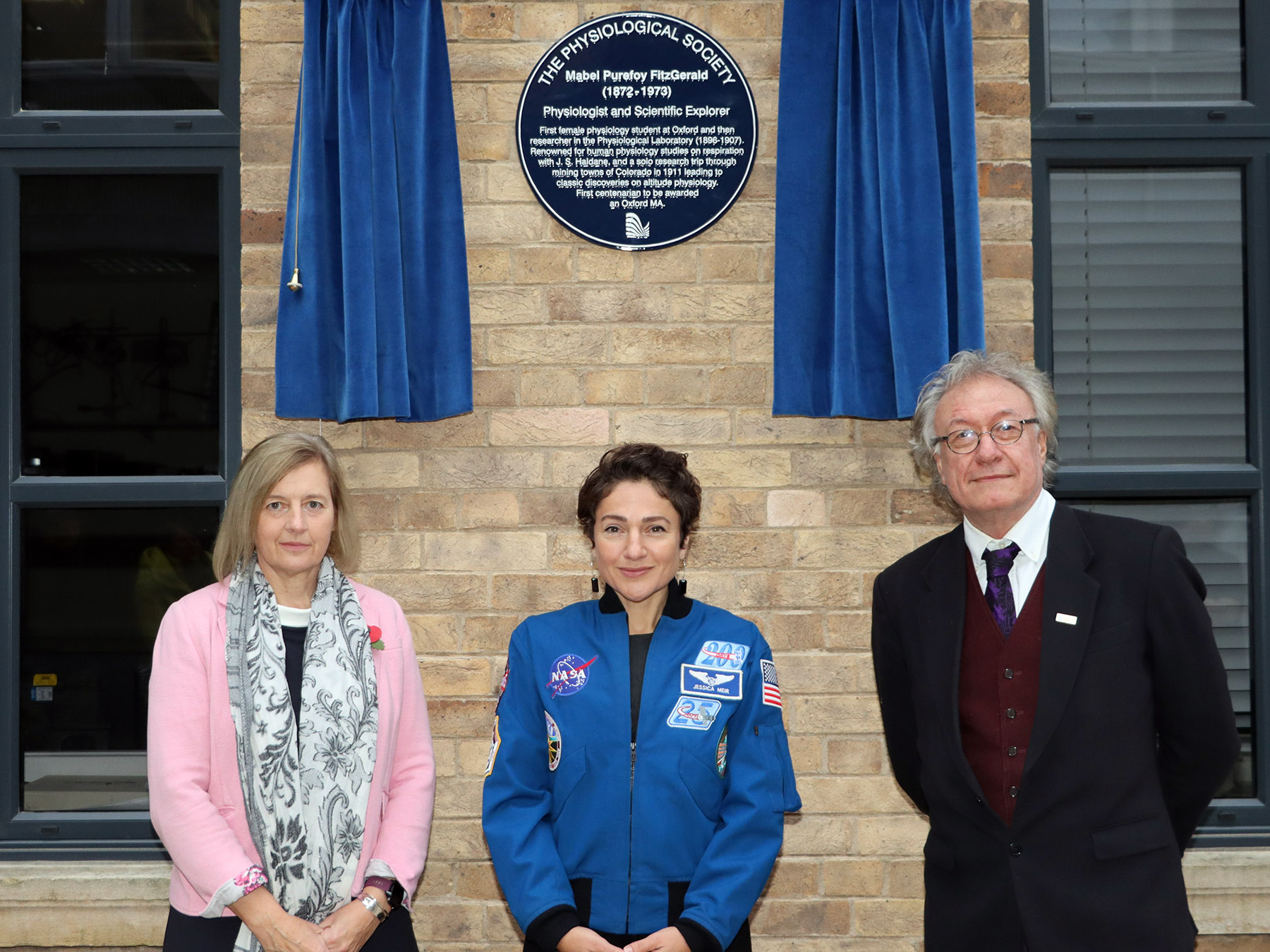 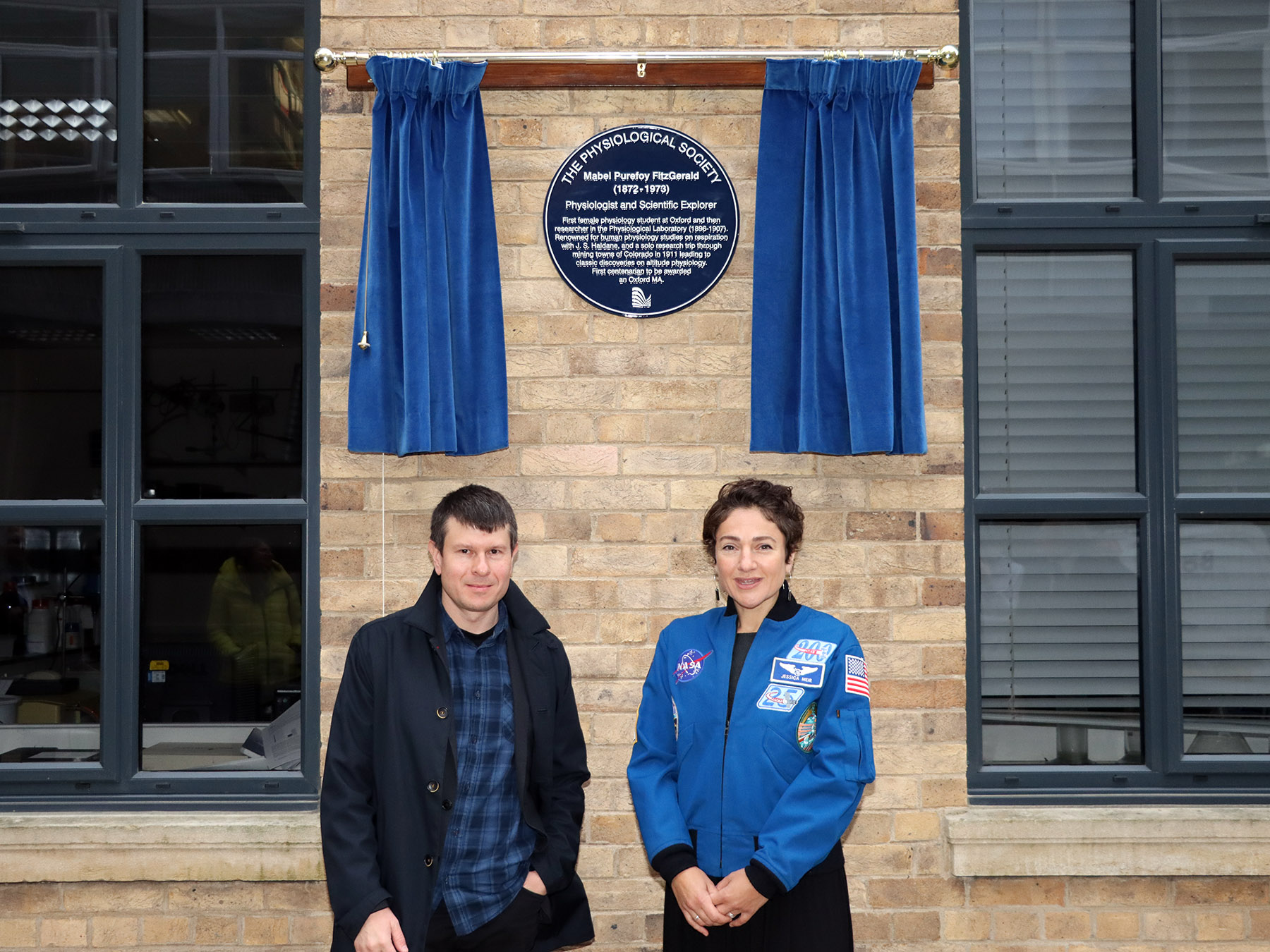 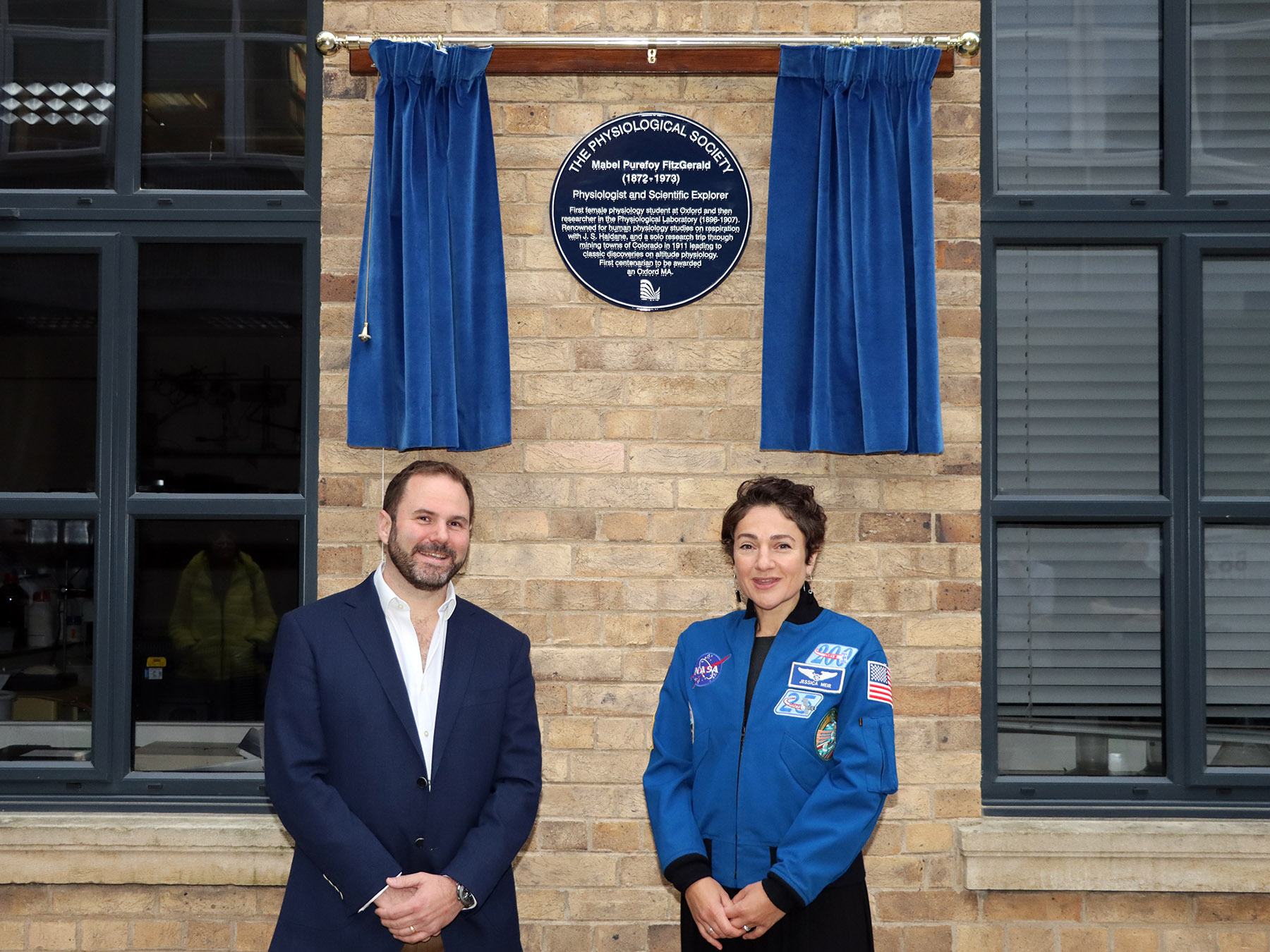 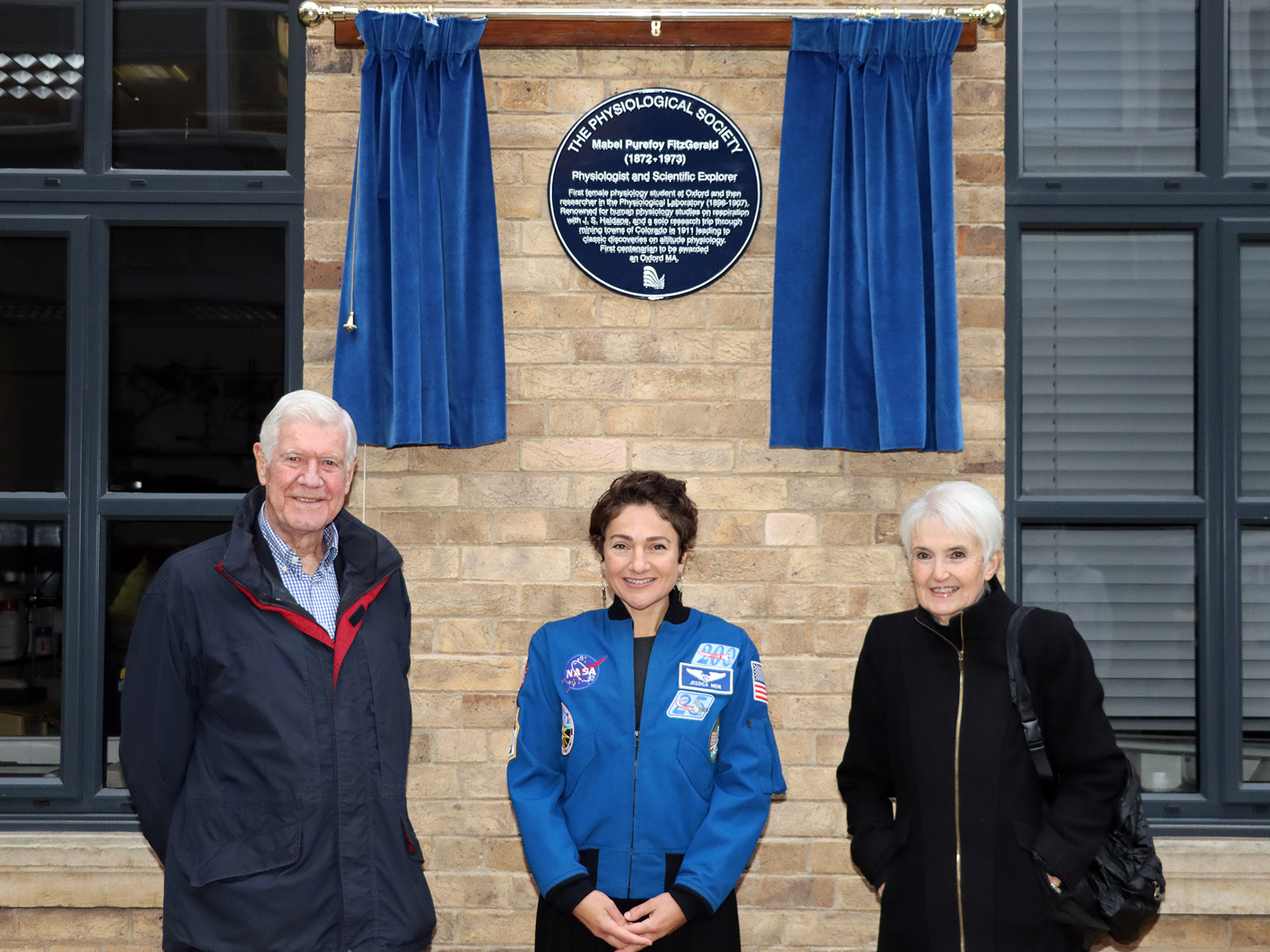 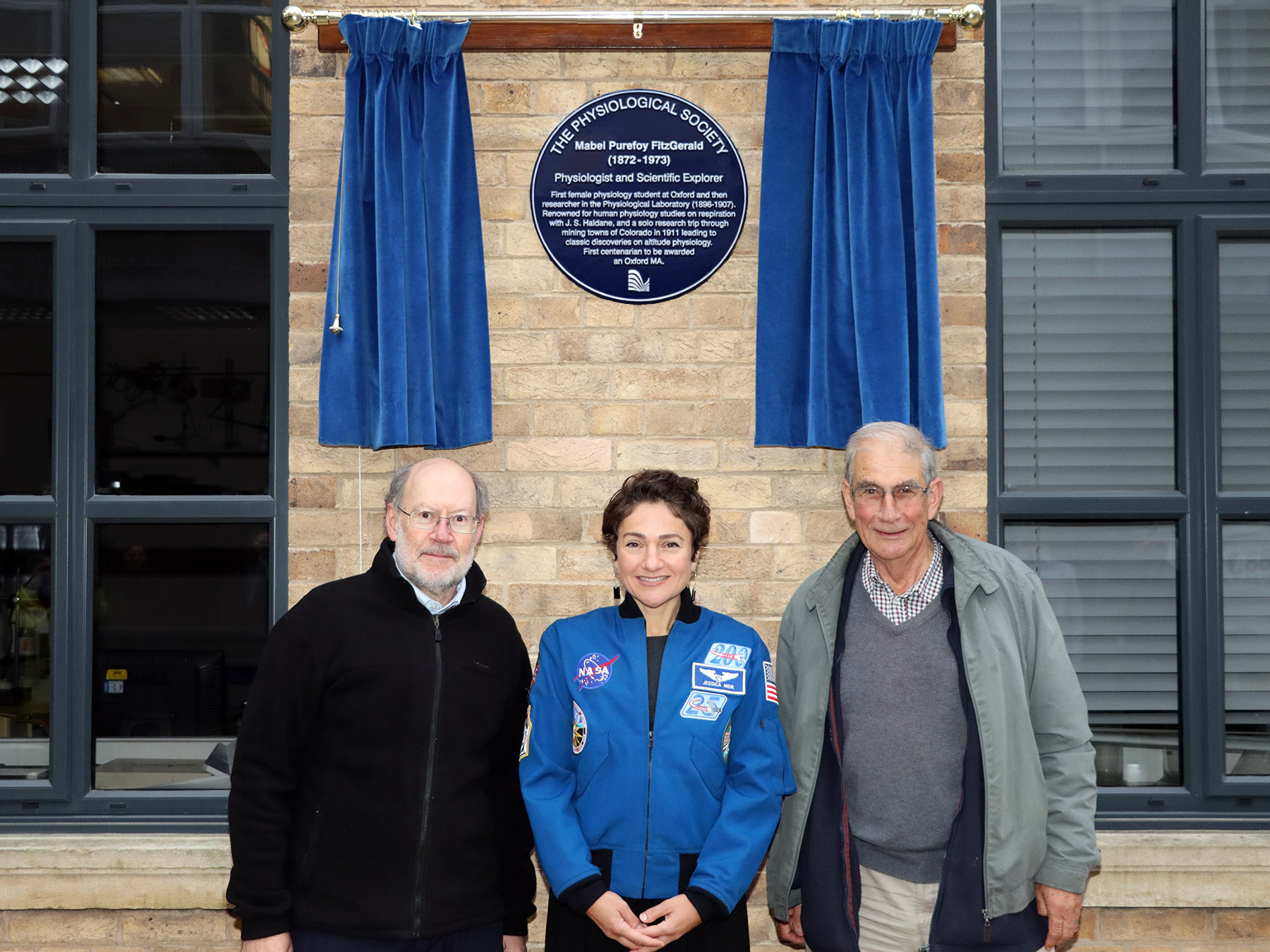 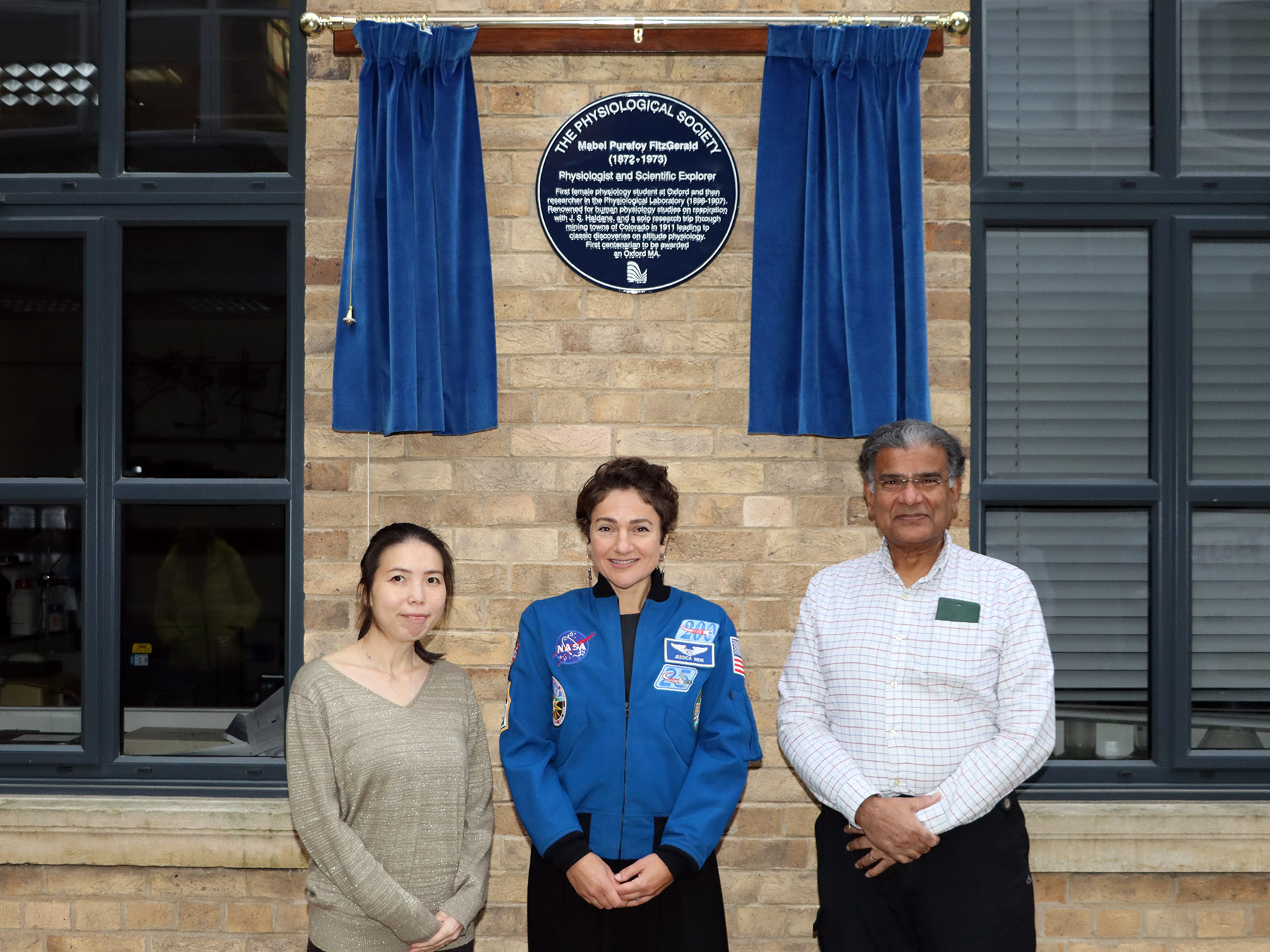 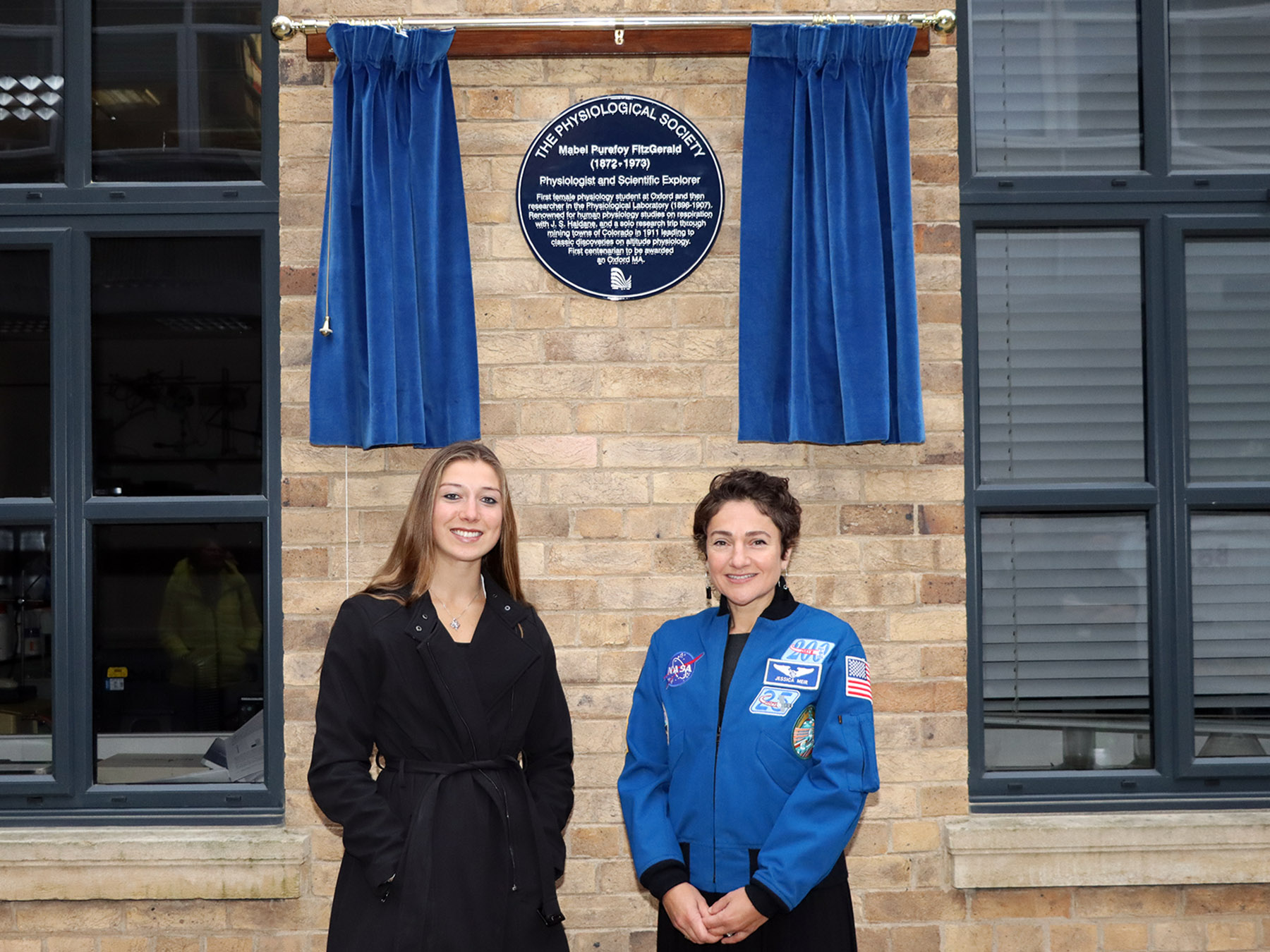 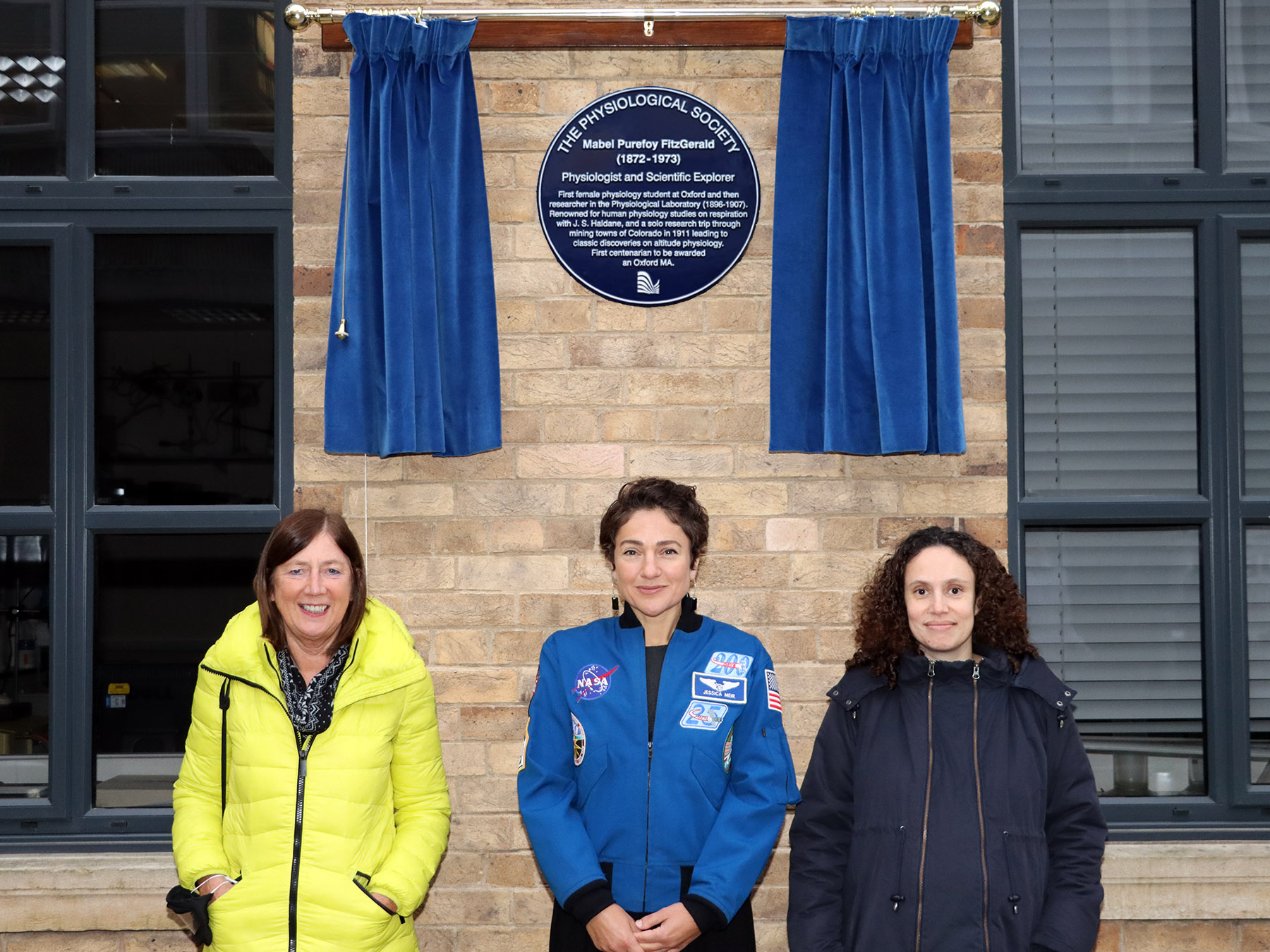 The plaque below reads: Mabel Purefoy FitzGerald (1872-1973) Physiologist and Scientific Explorer. First female physiology student at Oxford and then researcher in the Physiological Laboratory (1886-1907). Renowned for human physiology studies on respiration with J. S. Haldane, and a solo research trip through mining towns of Colorado in 1911 leading to classic discoveries on altitude physiology. First centenarian to be awarded an Oxford MA. 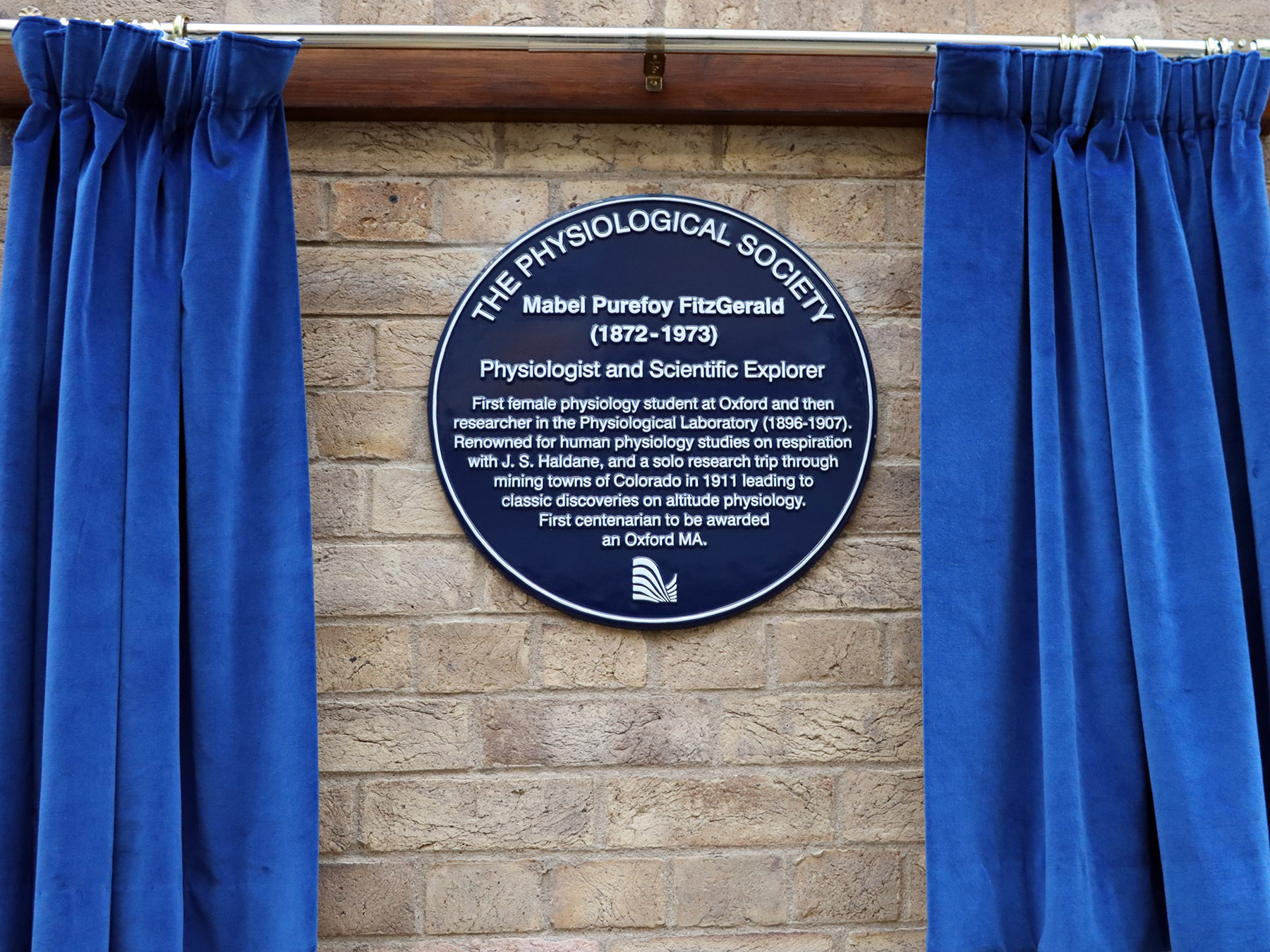