We spend around a third of our life asleep, yet the question of why we sleep is still unknown. There is a growing body of new and exciting experimental data, but this has not translated to a better understanding of the highly complex process of sleep regulation. We do not have a universally accepted ‘theory of sleep’ yet, which could guide ongoing research efforts, which represents a major barrier for making progress on this central question.

What is known is that sleep is a strictly regulated process. It is thought that the need for sleep, or ‘sleep pressure’, gradually increases during the periods that we are awake, as reflected by feeling tired. The longer we stay awake, the greater the urge to sleep, and measuring how long an individual can sustain a continuous awake state can inform us about the dynamics of the underlying neurobiological process. Upon sleep onset, the brain starts producing high amplitude, slow frequency oscillations, or ‘slow waves’, which are proportional to previous wake duration, and are thought to play an important role in restorative functions of sleep. In addition to this homeostatic process, which maintains the relative constancy in sleep across a 24-hour period, another equally important process is responsible for initiating and terminating sleep and wake states. These two processes are thought to be separate. According to DPAG’s Professor of Sleep Physiology Vladyslav Vyazovskiy: “In theory, you can fall asleep even when ‘sleep need’ is low, for example, when you are exposed to a monotonous, boring environment. On the other hand, even when sleep drive is high, you can remain awake for many hours, or even days, for example when you are experiencing jet lag, when you are hungry, or force yourself to not fall asleep, as in the famous Stanford experiment with Randy Gardner who stayed awake for 11 days in a row!” However, how these two processes – keeping track of time spent awake and asleep, and controlling sleep-wake switching – interact, remains unclear.

The conventional view is that the role of the neocortex – the outermost layered covering of the brain – is to generate state-dependent brain oscillations, such as slow waves. In turn, sleep-wake switching is thought to arise from brain structures deep in the brain, such as the hypothalamus and the brain stem. However, Professor Vyazovskiy says: “Contrary to this view, in our recent work undertaken by Dr Lukas Krone and a team of collaborators from DPAG, Pharmacology, and the Sleep and Circadian Neuroscience Institute, we discovered a previously unrecognised role of the cortex in both sleep homeostasis and sleep-wake control.”

According to Professor Zoltán Molnár: “The cortex is a highly complex structure, both anatomically and functionally, and is therefore difficult to study; and this is why we think its role in sleep control was previously overlooked. When we investigated sleep in genetically modified mice, in which a subset of cortical projection neurons was irreversibly silenced from early postnatal time, we observed that these animals stayed awake for much longer than their wild-type littermates and, strikingly, manifested highly diminished compensatory response to sleep loss, when sleep deprived. It is as if time awake slows down when the cortex is partially silenced, but the fundamental neurobiology behind is still completely unknown. In these new collaborative studies funded by BBSRC, we shall further dissect the causal relationships and examine whether the changes in sleep are due to the local or distant connectivity of these cortical neurons. In our initial model some parts of the hippocampus were also silenced. 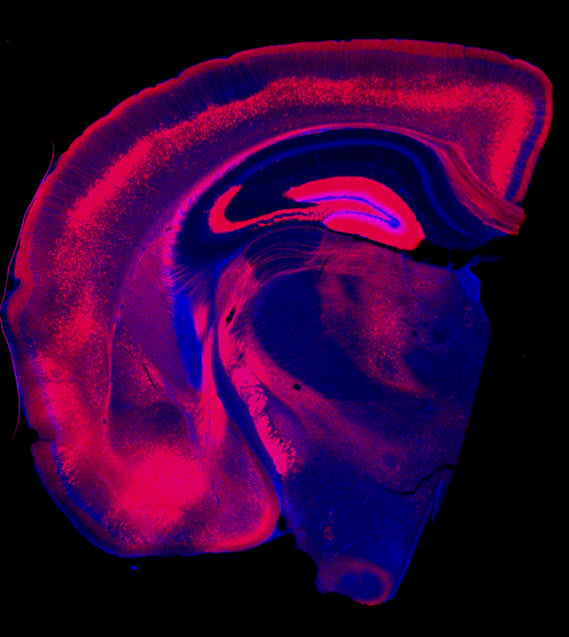 Figure shows a postnatal 21 days old mouse where some of the cerebral cortical layer 5 and hippocampal dentate gyrus neurons were silenced. The fluorescent photomicrograph also depicts the projections originating from these neuronal populations.

"We shall now silence cerebral cortical neuronal populations that either only project within the cortex or to more distant targets, including the thalamus and brainstem. We shall also use different genetic silencing tools that we can regulate in a more refined manner. The initial experiments by Dr Hoerder-Suabedissen et al used chronic and generalised silencing from birth based on genetic ablation of protein essential for the regulated synaptic vesicular release. This silencing can have long-term consequences on cortical circuit formation, establishment and maintenance of synapses, distribution of interneuron populations, myelination, microglia activity and even cell survival.  The grant shall enable us to refine our approaches to reveal causal mechanisms”.

The collaborative team’s findings, published in Nature Neuroscience last year, represent a unique opportunity to make a major progress in understanding the nature of the presently mysterious process that controls our ‘sleep need’. In this new project funded by the BBSRC, the team have set out a comprehensive research programme that aims to further investigate the neurobiological substrate, both at the anatomical and functional levels, of the cortical sleep control the team originally discovered. The Researchers will dissect the neural circuitry underlying cortical sleep control using advanced transgenic tools, and will also address the role of the circadian clock and key environmental factors.

Cortex may regulate the need for sleep (DPAG website)

Feeling tired? Here’s how the brain’s ‘hourglass’ controls your need for sleep – new research (The Conversation)

A role for the cortex in sleep–wake regulation (Nature Neuroscience)