The Group delivered seven hands-on activities covering a range of topics including blood, brain, DNA, heart, lungs, and the skeleton, some of which utilised virtual or augmented reality. Aimed primarily at children, DPAG and other University of Oxford scientists were on hand to answer questions and share fun facts. Postdoctoral research scientist and OPEWG member Andia Redpath said: “We made a lot of effort to create engaging activities that encouraged interaction, not just us unloading information. We wanted children to have fun, and adults to enjoy their time and see that their children were not only learning something new but being occupied.” 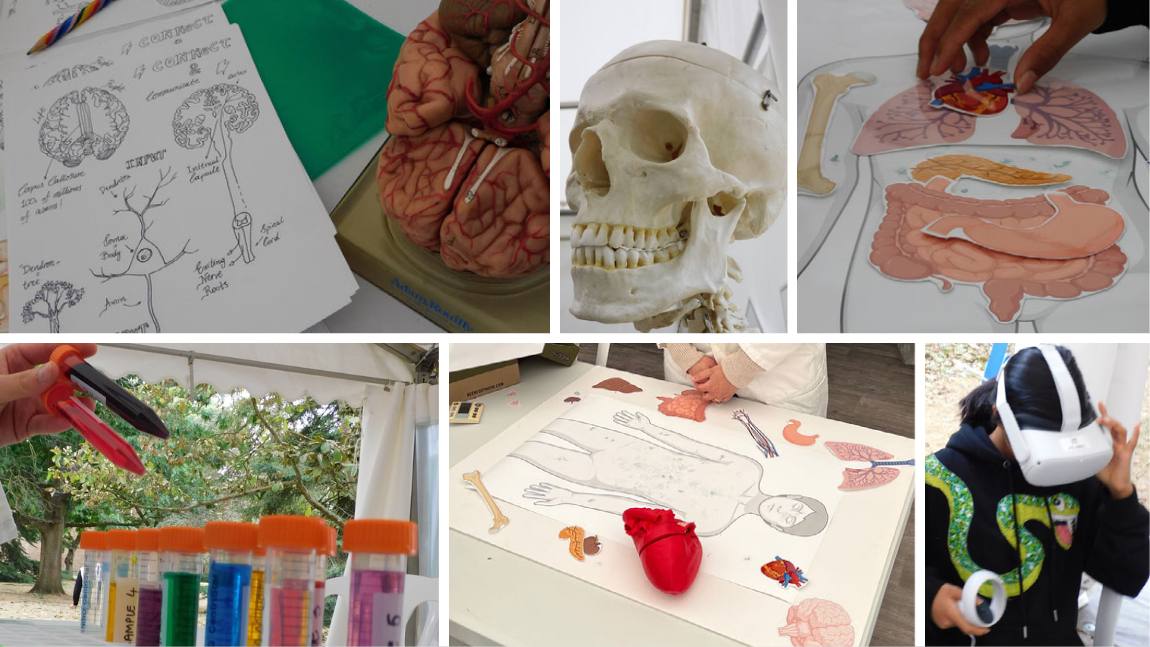 Research scientists and OPEWG members Christophe Ravaud and Irina-Elena Lupu, who work with Andia in the newly opened IDRM, reported that the activities were enjoyed by children and adults alike. From a 14-month-old who enjoyed drawing a heart to an adult couple who were simply interested in learning some biology, and all ages in between.

Christophe, who ran a ‘How much do you know about your heart?’ quiz, had visitors match different mammals to their resting heart rate, from the very slow (the blue whale) to the very quick (the pygmy shrew), and guess things like the volume of blood a human heart will pump in a person’s lifetime. Christophe said: “When I told them your heart will beat 3 billion times in your lifetime, they were so amazed by this, and I think they went away to spread the word. I was also really impressed by how mature the 5-8-year-olds were, asking questions and wanting to go deeper. Before doing this event, I didn’t know how I would catch the attention of the kids, but I found it’s not that difficult. You just need to smile, speak slowly and explain well and the kids love it!”

Irina hosted ‘The different colours of blood’ with visiting student Marie Vanhollebeke and BSc student Rafa Uddin. She said: “It was interesting because I would ask people what do you think is different between bright red and dark red blood, and their explanation would be ‘it’s sick versus healthy blood’, so they’d learn that actually it’s just about oxygenation. One thing I really enjoyed was when kids would start to link things and ask their own questions - like why do different animals have different types of haemoglobin in their blood - even if I didn’t know the answer, it was great to get them interested in science beyond what we were showing them.” 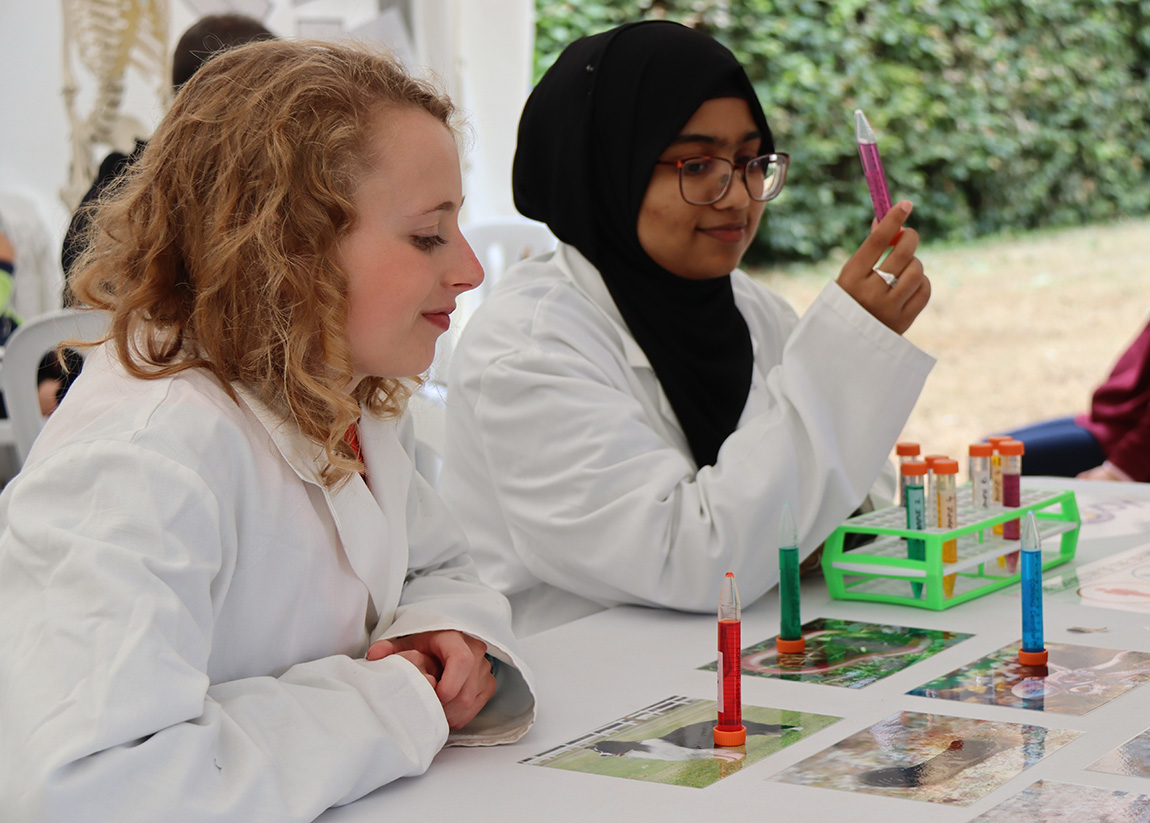 Andia, who had visitors place organs on a profile of the human body, said: “It was great to see people making connections with pieces of information that they had heard of, and then all of a sudden, you’re drawing a bigger picture. For example, many people didn’t know where the pancreas was, or even knew anything about it, but as soon as I mentioned insulin, links would be made like ‘I have a friend that has diabetes and he injects insulin’, and they’d learn that insulin is created by the pancreas but that it doesn’t produce enough insulin in type 2 diabetes.”

Representatives from DPAG’s Teaching and Technical Support team, Sharmila Saran Rajendran, Samuel Snowdon, and Barbara Kirby, supported by Mohamed Fasil from the Nuffield Department of Clinical Neurosciences, delivered ‘Human Anatomy: Spellbinding facts & activities for curious minds’ where they used virtual reality (VR) to provide an interactive platform for children to explore and learn about the human body. Sharmila noted: “When parents witnessed their children taking part, it made them believe that their kids could focus for a longer time using VR without distraction to learn about the skeleton. I would recommend VR-based Anatomy education for all age groups.” Sam, who was taking part in such an event for the first time, said: “I had such an amazing time getting the younger kids involved in exploring the human body and seeing their curiosity and intrigue. I got to experience a few ‘mind-blowing’ moments from the kids as they found out fun facts such as the total length of the digestive system or just how many miles of airways are in the lungs or even how things fit in the body. These moments are special as they could inspire them to do something similar as they grow up, and they can make a big impression on people's lives. It is not often I get to teach this way because teaching to an older cohort is more focused as they have to learn a multitude of anatomical terminology at a much higher level. I had to be careful at times not to wander off into my usual teaching mode but regardless, having the space to break it down to the basics and let them explore in fascination and awe and allowing them to throw questions at me, no matter how mundane, I really valued that.”

Andia agrees that the activities may have had an impact: “Access to practical experiments at a young age is really important because you don't start doing biology experiments until your GCSEs. But I think the age of 5 - 8 is when it matters the most in terms of whether someone is going to do science as a career. If parents see that their children are really excited about biology at that really young age, they might nurture it. My father's a scientist, and he nurtured my interest in science from a really young age. Our event was really successful in that we did interact with very young children.”

The activity organisers and volunteers were busy until closing time. Sam noted that: “One minute it was 10am and the kids were arriving, the next it was 3pm and unfortunately, we had to finish.” Andia commented: “When we were wrapping up, there were still people coming. We had only a moment of around 20 minutes when it went a little quiet during lunch.” Graduate student Bethan O’Connor covered Andia’s activity for a while and was also instrumental in ensuring that passing families were directed to the event. She put up posters around the park, talked to visitors, and engaged people in conversations about her research into Parkinson’s.

Equality, Diversity and Inclusion Officer Louise Cotterell, who was on hand to oversee the event, gathered feedback as visitors left. It was all excellent, with children talking excitedly about what they had learned, and parents and caregivers delighted with the event. One 9-year-old boy commented: “I loved the virtual reality – I now just have to get back to normal reality.” Two parents separately stated that their daughters, who wanted to be a doctor and scientist respectively, loved taking part. One caregiver commented: “It’s really good for the children to be able to see and touch things and it’s a great introduction to science at a young age.” 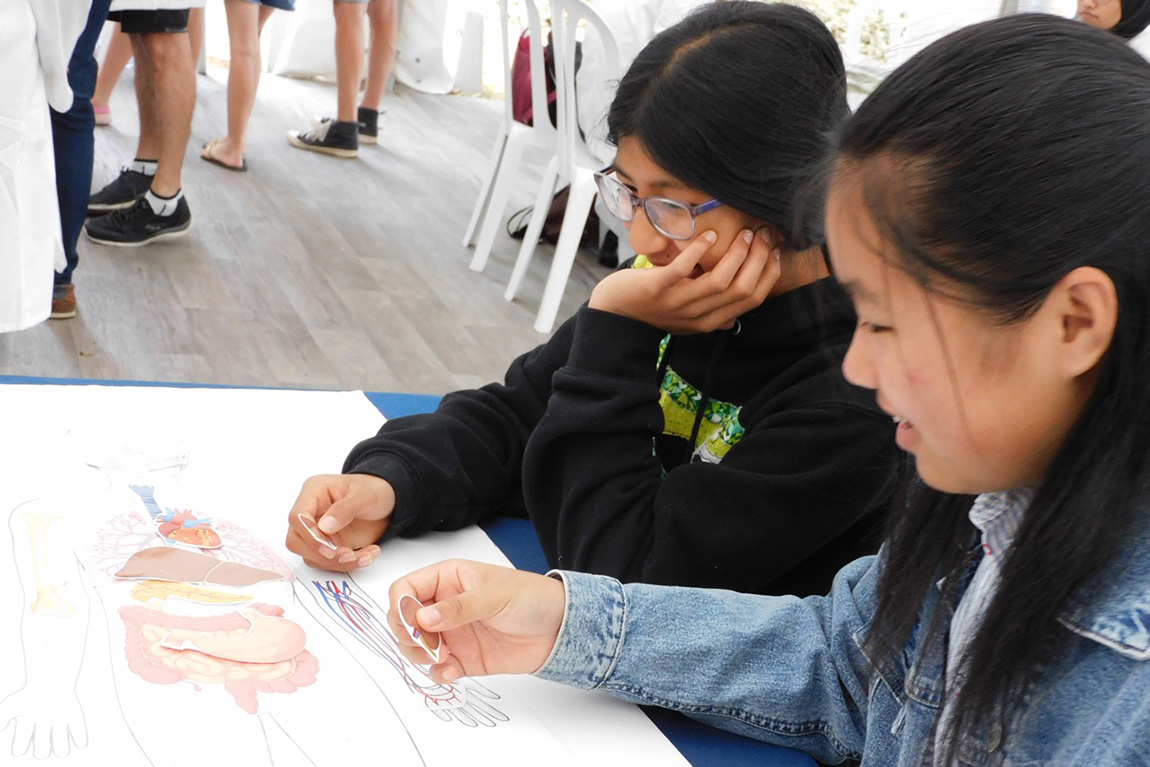 Many attendees mentioned that they are keen to attend future events and the DPAG OPEWG will bring anatomy research to the public again on Saturday 8 October at the Wesley Memorial Chapel as part of IF Oxford Science + Ideas Festival. Irina-Elena Lupu and Andia Redpath also volunteer at the Natural History Museum’s Science Saturdays, which features four activities for children - microscopy, fossils, pollination, skeletons and X-rays - for three hours on term-time Saturday afternoons.