In the evening of Tuesday 8 September the Department of Physiology, Anatomy and Genetics gathered to celebrate two prestigious recognitions. 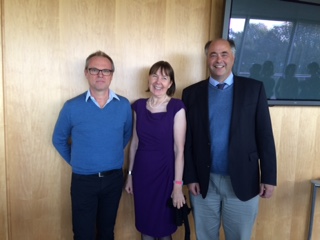 Professor Fran Ashcroft was recognised for her contributions to scholarship, public understanding of science and higher education in this year's Queen's Birthday Honours, and was made Dame Commander of the British Empire.

Professor Gero Miesenboeck was elected Fellow of the Royal Society.

Dame Fran thanked her lab for her success which was in part, down to them while Gero thanked Professor Peter Robbins, Head of Department, as well as his own team at the CNCB.

Congratulations to Dame Fran and Gero!

Congratulations are in order for postdoctoral research scientist Dr Christoph Treiber who has been awarded a Starting Grant from the European Research Council. His funded project will investigate the genetic components that may contribute to diversity of brain function and behaviour.

A Srinivas Group-led collaborative public engagement project has been awarded more than £188k to bring a multi-disciplinary approach to the concepts of ‘destiny’ and ‘embodiment’ to the local Oxford community.

Congratulations are in order to Mootaz Salman on his conferral of the title of Departmental Research Lecturer.

Congratulations are in order to Vladyslav Vyazovskiy on his conferral of the title of full Professor. Research in the Vyazovskiy Lab aims to understand the fundamental questions of "what is sleep?" and “why do we sleep?”